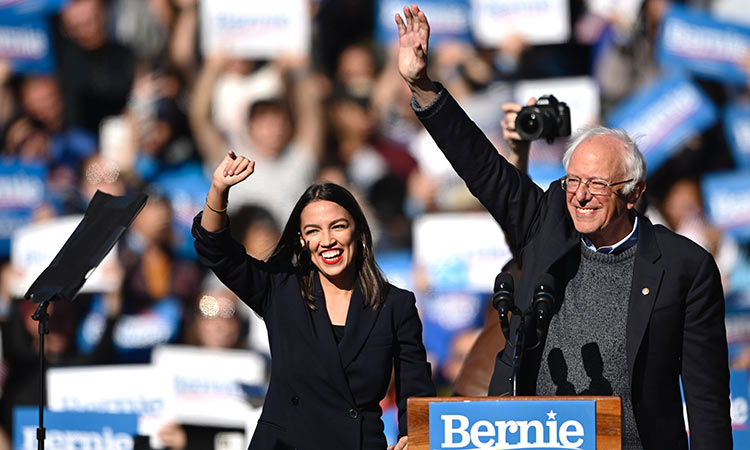 US Senator Bernie Sanders and representative Alexandria Ocasio-Cortez wave to a crowd of supporters during a campaign rally in New York City. File/Agence France-Presse


Joe Biden’s victory over Donald Trump is encouraging for people on the left. Democrats have shown that an energised and angry right can be beaten – decisively.

But the picture is more complicated. While Democrats retained their majority in the House of Representatives – though not by much – they failed to flip the senate and all hopes of doing so now hinge on two run-off elections in Georgia.

Internal battles within the Democratic Party have quickly surfaced. Congresswoman Alexandria Ocasio-Cortez, a self-described socialist, claimed almost all of her offers to help moderate Democrat candidates went unanswered. Meanwhile, establishment Democrats, including House Majority whip Jim Clyburn, suggested that slogans such as “defund the police” and an association with socialism hurt their cause. Ocasio-Cortez also pointed out, however, that every swing-seat Democrat who endorsed medicare-for-all won re-election.

After Biden’s win, progressive senator and former candidate for the 2020 Democratic nomination Elizabeth Warren – who went from criticising Biden on the debate stage to campaigning alongside him –tweeted a thinly-veiled warning: “What happens next matters. In the past, efforts to build ‘unity’ and ‘consensus’ in Washington have too often meant turning over the keys to giant corporations and their lobbyists. We can’t let that happen again.”

Across the pond in the UK, where I write this, we can see what happens when parties on the left become possessed by infighting. The Labour Party has practically made infighting its brand, and losing elections its favourite pastime. It has not won a parliamentary majority since 2005; in 2019, the party had its worst election result for nearly 100 years.

This losing streak suggests deep problems. And under new leader Keir Starmer, the internal war over the sacking of Rebecca Long-Bailey and expulsion of former leader Jeremy Corbyn proves that Labour’s divisions have not gone away.

As Democrats proved in 2016, when the scars of the primary between Bernie Sanders and Hillary Clinton were still raw during the campaign, divided parties rarely win elections. But Biden has won an election. And as a president-elect with a House majority, a slim chance at a senate majority and, most importantly, the wind of optimism behind him and a country crying out for change, he finds himself in a position not too dissimilar from Labour’s Tony Blair in 1997.

We can argue endlessly about Blair’s years as Labour leader. But as successful as he was, his rivalry with Gordon Brown and infighting between Blairites and Brownites punctuate his legacy. A distinctive after-effect of his time as prime minister is a fractured Labour Party often more preoccupied with debating the actions of its former leaders – and attempting to “right” the perceived “wrongs” of those leaders – than holding the Conservatives to account and winning power in the present day.

No one person – be it Blair, Corbyn, or any of the leaders in between – bears sole responsibility for Labour’s deep divisions. The party has paid a price for the shift from class to culture war, too often finding itself on the losing side. It has struggled to appeal to voters in both working-class and affluent urban areas, and might have lost loyal voting blocks in Scotland and the north of England forever.

Labour has also failed to find the balance between uninspiring but necessary ideas and policy proposals that most voters view as pie-in-the-sky fantasies. Now tension between grassroots organisations, such as Momentum, and Labour’s leadership continue to rise. Whataboutery is rampant and the list of senior figures who aren’t either viewed as toxic by the party’s grassroots, or disliked by its more moderate members, feels shorter than ever.

Some of this will sound familiar to Democrats, which makes Labour’s an important story for them to learn from. The battle lines are similar: progressives are accused of touting fantasy policy ideas that will bankrupt the economy, and moderates are accused of being too cosy with money and upholding the status quo. It’s a circular firing squad that never ends, even if the shooters change.

Yet one of the most striking and impressive things about Biden’s win was just how united both wings of the Democratic Party were behind him. For a moment, it seemed like the party had learned in four years what Labour has failed to grasp in decades.

But now a post-mortem fight over who really won the day for Biden –and therefore who deserves to benefit most from his presidency –has begun. Was it the moderates who wooed the Cindy McCain’s and John Kasich’s of America into lending Biden their vote? Or was it progressives like Ocasio-Cortez and Sanders galvanising their supporters into turning out for Biden in a way they didn’t for Clinton?

What is troubling is that these conversations seem to lack nuance. Reconciling what went wrong in Miami with what went right in Georgia and Arizona will take time. Progressives should not be blamed or sidelined after organising to help get Biden into the White House, but equally they should refrain from slinging mud at their moderate peers now the election is over. The Georgia senate run-off elections in January will be a key test for how Democrats will approach specific issues like medicare-for-all in the new political landscape, and figures like Stacey Abrams, who served in the Georgia House of Representatives from 2007 to 2017 and has brought opposing factions together, will be even more key in maintaining unity.

On both sides of the Atlantic, the left faces opponents who are united in their goals. Trump has been defeated, but after his “hostile takeover” (as Jared Kushner put it), the Republican Party is very much still the Trump party, bar a few notable dissenters. And in the UK, Brexiteers succeeded in turning the Tories into the party of Brexit in all but name, also bar a few dissenters. But as Trump discovered, there’s a limit to this strategy.

Republicans might have been beaten for now, but they’ll be back. And Democrats owe it to the people who elected them not to succumb to infighting. Because if they do, it could be a long road back — just look at the sorry state that the Labour Party is in. 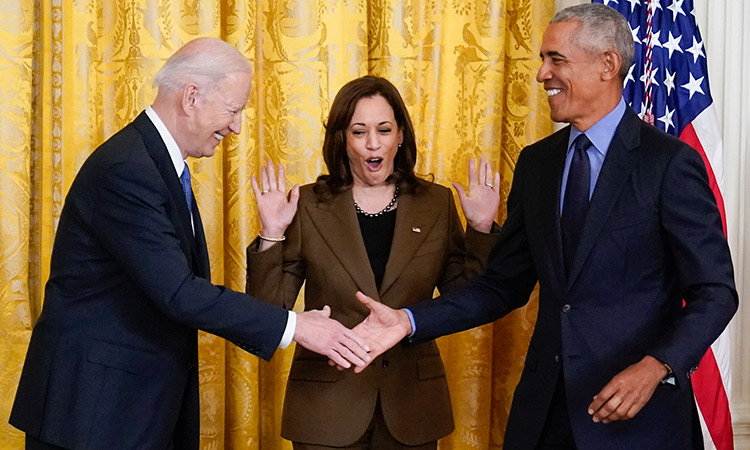