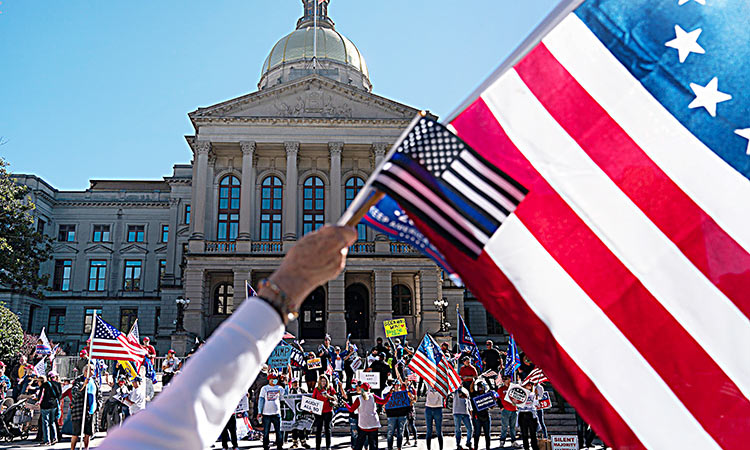 Supporters of President Trump rally against the election results outside the Georgia State Capitol in Atlanta, Georgia, on Saturday. Agence France-Presse

Considered unlucky in the West for centuries, Friday the thirteenth was devastating for Donald Trump. The Electoral College count rose to 306 for presidential Democratic rival Joe Biden, the talisman number Trump won in 2016. Furthermore, as vote counts continued in flagging states, Biden won by the highest number of popular votes, 80 million, of any presidential candidate in history — five million more than Trump.

Trump’s claims of “fraud” and “rigging” in the November 3rd election were dismissed by the Department of Homeland Security which declared it “the most secure in history” and said there was no “evidence that any voting system deleted or lost votes, changed votes or was in any way compromised.”

This statement finished off attempts by Trump’s lawyers to secure recounts in states which had backed him in 2016 but switched to Biden this year. In any case, legal challenges to results had been dismissed in all but one state, Georgia, where Biden has a narrow lead over Trump and a recount has begun at the initiative of the state authorities rather than Trump’s campaign.

Die¬hard members of Trump’s voter fraud hotline team halted operations due to the lack of fraud claims and abusive calls.

Sixteen assistant US attorneys ordered to monitor 2020 election asked Attorney General William Barr to rescind a memorandum allowing state investigators to pursue allegations of “voter tablulation irregularities” in specific cases before results are certified on December 14th as they have found no evidence of serious anomalies.

In a Wall Street Journal article multi-billionaire Charles Koch, a longstanding Republican party patron, apologised for contributing to US political division, revealed he did not contribute to the Trump campaign, and announced he would work with the incoming Biden administration. Koch’s defection is a major blow to both Trump and the party which Trump has captured.

As the daily number of coronavirus cases rose to a record 184,500, Trump emerged from self-imposed isolation in the White House to tell the press that his administration will not impose a national lockdown but he could not speak for the coming administration ¬¬— without saying whose administration this “will be.” This amounted to Trump’s indirect, weak admission that he lost.

For Trump even this was a major psychological step into his post-White House career. His niece Mary Trump, who has written a book on the dysfunctional Trump family, has said repeatedly that the patriarch Fred Trump, real estate magnate, insisted that his children must never be “losers.” During his lifetime, he ensured with financial rescue packages that Donald was never a “loser” although his business dealings were often losing propositions.

Trump was providentially provided with $427 million over a dozen years to rescue his faltering businesses by the reality television series, “The Apprentice,” in which he starred from its inception in 2014 until he entered the White House. When he leaves he will have to face $1.1 billion owed over the next two years to creditors by his businesses. He has even admitted to debts of $421 million but has dismissed this sum when comparing it to his loss-making real estate and property assets. Since, however, it is estimated that he has told 22,0000 lies since his inauguration in January 2017, his word cannot be believed.

In a bid to stave off his creditors, Trump has created a political action committee (PAC), called “Save America,” which he calls his “Official Election Defence Fund.” The immediate purposes of the PAC are to finance the legal challenges against the results of the presidential election and pay the outstanding debt of his election campaign. He also seeks long-term finance to maintain his influence in the Republican party after his exit from office. Naturally, 60 per cent of the sum he raises will be used to repay debt; 40 per cent for the party.

Trump’s refusal to accept defeat is “brand extension,” Ann Hornaday, the paper’s film critic, writes in the Washington Post, “burnishing — and monetising — his own persona was always the point.” Even he has admitted that his first presidential campaign, which he did not think he would win, was intended to bolster his “brand” in order to make more money from his properties. Once in office, he never stopped working on upgrading his “brand” — largely at the expense of the “American people,” particularly after the pandemic struck early this year.

Treating him as an actor in a film he is scripting and directing, Hornaday points out, “He grasped a truth about the American populace that we understand dimly, if at all: that, addicted to conflict and the distraction of hyped-up melodrama, we could always be counted on to watch — not for policy pronouncements or statesmanlike comportment, but simply to see what his character would do next...

“What better way to set up the next chapter than with a manufactured cliffhanger, confected not from narrative logic or credible realism, but a cockamamie plot twist?” she asks.

In her view, “..it’s all fan service, dedicated to keeping his millions of followers engaged, enraged, titillated and flattered.” Ultimately, she concludes, “Trump will have aggravated tribal hatreds, shredded democratic norms, made us less secure and poisoned our faith in government.”

The invasion of Washington on Saturday by thousands of pro-Trump supporters who clashed with smaller anti-Trump rallies shows that Trump’s long-term policy of divide and destabilise is working and could deepen the country’s Covid, economic, and political crises over the next four years.

In the view of The Gulf Today’s correspondent: That is Trump’s aim. In the short-term he intends to be in position to dictate war or peace, depending on how he is treated when he does not enjoy presidential protection from prosecution.

Before he leaves the White House both lawyers and commentators argue Trump may pardon himself for federal crimes committed while he has been in office, but he faces prosecution for fraud, misrepresentation of assets, tax evasion, and other white collar crimes in New York state and elsewhere. He clearly believes that his status as an ex-president and his very large following will protect him from state laws he has flouted.