Biden could be helped by a return to militarism - GulfToday

Biden could be helped by a return to militarism 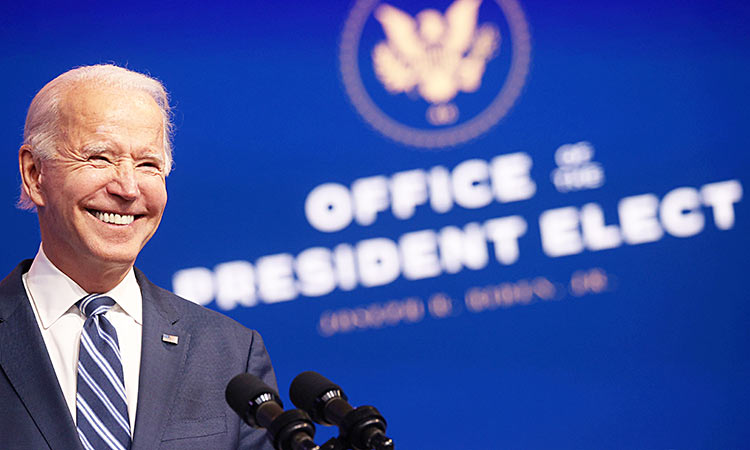 
As president-elect Joe Biden prepares for office, he and the new generation of staffers, pundits, think-tankers, speechwriters and policy wonks circling around him have a big problem.

The president can make nice, conciliatory, heart-warming speeches. But what can he actually do which is politically unifying in the country, rebuilds bridges to America’s alienated allies and doesn’t become ensnared in the likely Congressional gridlock?

The shortlist is obvious but doesn’t take him very far. He will ensure that the USA re-joins the Paris Accord on the climate crisis. Great. But he will not be able to get approval to spend money on renewables or take regulatory or tax measures which radically reduce the carbon dependency of the economy.

It was notable that Senator Mitt Romney – the former Republican presidential nominee who all but endorsed Biden this year – took straight to the airwaves on Sunday to voice opposition to any constraints on the coal and gas industries.  So much for bipartisanship.

Biden may bring the states together behind a coronavirus prevention strategy but will again lack the resources to implement it.  He then faces the loss of Obamacare health provisions for low income Americans if, as expected, the conservative-dominated Supreme Court decides to emasculate the scheme’s legal potency.  Senate Republicans still regard “healthcare for all” as anathema. The new president will use all his considerable political skills to get a desperately needed economic stimulus package through Congress.  But without the congressional luxuries Obama enjoyed after the financial crisis, it will be well short of what is needed.  And then Donald Trump supporters and the Democratic “progressive” left will likely march together in an unholy alliance, denouncing a “failure to deliver”.

There is, however, a way out which will not appeal at all to Biden’s idealistic young supporters – and perhaps go against his own instincts (and mine) – but which ticks a lot of political boxes: a big injection of dollars and political support into the armed services and what used to be called the military-industrial complex.

This is the one cause for which conservative Republicans may be willing to spend unlimited amounts of public money.  The promise to build a new fighter jet in a Senator’s state is perhaps the one thing that might persuade him also to put more into health and education.

I suspect that Senator McConnell, the “Mr No” of the legislature, has a soft spot for the armed services. Indeed, one aspect of Trumpism which disgusted many conservative Americans was the disrespect for the military and its disabled casualties, shown by a cynical draft-dodging President. That patriotic political constituency is one which is ripe for colonisation.

Such a commitment also serves an economic purpose: the revival of the American economy and countering the return of unemployment. Anyone who looks back at Roosevelt’s New Deal era without the sepia-tinted spectacles of modern progressive politics will know that a reluctant FDR had to be dragged kicking and screaming into deficit financing, which he hated.  His breakthrough to achieve full employment was largely on the back of rearmament.

Having been privileged to hear the Cambridge lectures of the legendary Joan Robinson, I recall her crisp economic analysis of the 1930s: “Hitler had already found how to cure unemployment before Keynes had finished explaining why it occurred”. In the coming four years, Keynesian economics is not going to be delivered in the US through a “Green New Deal” but it may come about with the help of defence spending.

The technological challenges of modern warfare offer the prospect of economic productivity.  Cyber and space warfare; drones; what the defence anoraks call a “reconnaissance-strike complex” all feed innovation in artificial intelligence, quantum computing and big data.  It is worth remembering that it was research programmes at the Department of Defence which laid the foundations of Silicon Valley a generation ago.

The military-industrial complex also provides a bridge to Europe. It is fanciful to imagine that the new administration in Washington is going to spend a vast amount of political capital on a trade agreement with the EU (which proved impossibly contentious even in easier times).  It is also most unlikely to throw a lifeline bilateral trade deal to the hapless and detested Johnson government in the UK. But Europeans, the British and the Americans all care about Nato and the Europeans, in particular, are worried stiff about Russia.

Britain has been preoccupied with poisons when it comes to Russia, but internationally defence experts are more concerned about the impact of Putin’s lavish defence spending. Despite his posturing, there is serious respect in Western military circles for the way Russia has rebuilt its military capability in advanced weaponry.  They are now practising the deployment of sophisticated systems in the Ukraine, the Caucasus and Syria.

So stand by for a Nato relaunch.  That means more money on all sides, though Biden will be more polite than Trump in telling his Nato allies to step up to the plate with cheques in hand. When the postponed Public Spending Review is carried out in the UK you can be sure that defence spending will have pride of place, perhaps by reclassifying a big chunk of military spending as foreign aid.

In a similar way, there appears to be a rare political consensus between conservatives, liberals and the Trump populists about the need to ‘do something’ about Xi Jinping’s China.  There is a real risk that perfectly sensible engagement with China on economic, environmental, public health and other areas of common interest (as I argued in my recent short book China: Engage) will be trumped by the word “security”.

In fact the issues surrounding China are overwhelmingly about economic, rather than military, competition but it is easy to see how the language of a new Cold War with China can be given a martial twist.  Big arms deals with Taiwan, Japan and India; more aircraft carriers and sophisticated kit deployed around the Pacific all feed a narrative, with which both Democrats and Republicans are aligned.

All my liberal instincts and my Quaker upbringing rebel against the prospect of a revival of militarism. But then I look back at the history of someone who inspired me as a student: a liberal, Irish Catholic, American president with a gift for uplifting language and inspirational optimism. J F Kennedy unified America and the West behind a confrontation with the USSR and was the first US President to commit troops to a debilitating and losing conflict “fighting Communism” in Asia.

It is easy to see how we might find ourselves repeating history in an even more dangerous world.  This weekend I joined with much of the world in celebrating Biden’s win, turning the page on a dysfunctional and at times downright dangerous presidency.

But I can also foresee a time when we may look back on the ugly Trump era – dare I say, even nostalgically – as one of military disengagement and relative peace.