Melania’s next step after the White House - GulfToday

Melania’s next step after the White House 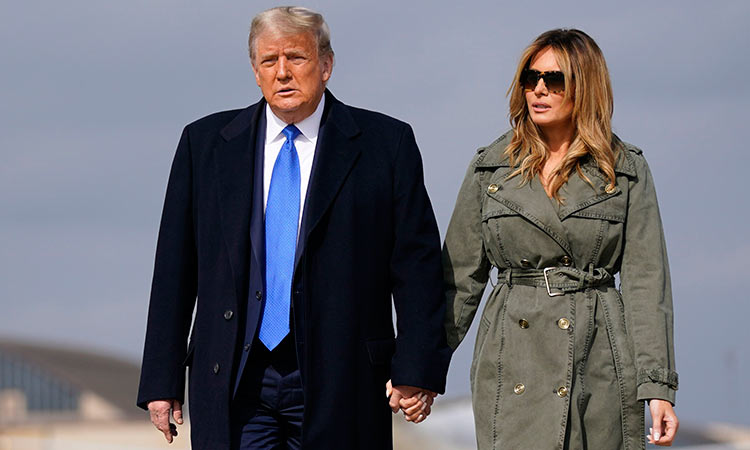 
If you were a fly on the wall of the White House, where on Saturday would you have wanted to be?

Not watching Donald Trump as he returned home from his golf game: his fury and denial was all too predictable. Not watching Jared Kushner and Ivanka Trump: their despondency and growing alarm was equally expected.

The prime spot was certainly wherever Melania Trump was, to watch how she took the news.

On the night of the 2016 election, we know how she felt. “Melania was in tears - and not of joy,” wrote Michael Wolff in his book Fire and Fury, in an account backed up by other reporters.

On Saturday she may well have felt the same – this time, however, with tears of relief. The 50-year-old Slovenian-born model has done little to dispel rumours of her reluctance to play the game of first lady.

Some went further, with former White House official Omarosa Manigault Newman claiming she planned to divorce her husband as soon as she could, post-presidency. “Melania is counting every minute until he is out of office and she can divorce,” she said.

“If Melania were to try to pull the ultimate humiliation and leave while he’s in office, he would find a way to punish her.”

Whether the former reality TV show contestant was close enough to the first lady to know how she felt was unclear. Ms Manigault Newman was fired from the White House and left after a year, going on to release an explosive memoir of her time there and air recordings she had made inside the Situation Room, in a highly unusual breach of protocol.

Furthermore, the first lady is known to be intensely private, and with few close confidantes: behind the expensive smile and the icy glamour, does anyone really know what is going on? She is so elusive that the internet has revelled in “Fake Melania” theories, speculating endlessly on whether she has a body double stand in for events she would rather not attend.

CNN on Saturday reported that Ms Trump was inside the White House, “keeping to herself”, and not engaged in any strategy sessions with other Trump family members or senior administration officials. She did tweet on Sunday her support for her husband’s argument, however.

“The American people deserve fair elections,” she said. “Every legal – not illegal – vote should be counted. We must protect our democracy with complete transparency.”

Ms Trump’s next move will be motivated by two things: the welfare of their son Barron, 14, and money. Many had sympathy for Ms Trump in the early days of the campaign and his presidency – after all, she was hardly the first glamorous woman to marry a billionaire 25 years her senior.

That soon soured when she began taking action straight out of the Donald Trump playbook, like threatening legal action against the delighted residents of her tiny Slovenian hometown who promoted her image, and claiming in court documents that highly libellous accusations about her damaged her “unique, once-in-a-lifetime opportunity” as first lady “to launch a broad-based commercial brand in multiple product categories”.

It is taken as fact that Ms Trump, like the two women who were Mr Trump’s wives before her, has a pre-nuptial agreement.

Ivana Trump, married to Mr Trump from 1977-1992, had four prenups, amended as their fortune grew, and with the final one serving as the basis for their explosive, tabloid-delight divorce. She was awarded $25m (£19m) plus the couple’s Greenwich mansion, and $650,000 annually for the raising of their three children – Donald Trump Jr, Ivanka and Eric.

The bitter and highly-public divorce battle led Mr Trump to insist on a non-disclosure agreement (NDA) written into his prenup with Marla Maples, who he was married to from 1993-1999. Their divorce came just before a four-year wedding anniversary specified in their prenup that would have increased Ms Maples’ possible settlement from its original $1m to $5m.

The first lady has now been married to Mr Trump for 15 years – as long as Ivana Trump.

She played significantly less of a role in increasing his business; Ivana Trump was a senior executive in the Trump Organisation, and highly involved in his corporate affairs, while Melania Trump has never been interested in the company.

She has, however, been vital to his brand, and her former friend Stephanie Winston Wolkoff claims that she remained in New York for the first 10 weeks of his presidency to rewrite their prenup, guaranteeing an equal share in the family fortune for Barron.

In the early days of his presidency, it’s likely she largely got what she wanted, provided she remained by his side for the duration of his time in the White House.

Ms Winston Wolkoff, one of Ms Trump’s few close friends, met her in 2003, when they were both 32, and Ms Winston Wolkoff was working at Vogue. Whenever Mr Trump’s behaviour raised eyebrows, his wife would remain sanguine: “I know who I married,” she would frequently say.

Ms Winston Wolkoff writes in Melania and Me, her savage memoir of her time assisting Ms Trump in the White House, that she was “in awe of her uncrackable composure” and says that Ms Trump “is honest, is loving, prizes her privacy above all things, and is faithful to her core values in a way Donald could never be.”

Ms Winston Wolkoff believes that Ms Trump loved her husband, in a way, but is also as calculating and manipulative as he is. The “I Don’t Care Do U” jacket, worn to visit migrant children, was one way of expressing her anger; “Operation Block Ivanka”, a bid to try and stop the “first daughter” from stealing the spotlight, was another.

Kate Bennett, CNN correspondent and author of Free Melania, writes that Ms Trump sleeps in a room on the third floor of the executive residence, where Michelle Obama’s mother lived during the Obama presidency. Mr Trump reportedly sleeps in the master bedroom on the first floor.

So what will her life look like outside the White House? She may well walk away from Mr Trump, in time, depending on the stipulations of the prenup.

Mexico’s former president, Enrique Pena Nieto, left office in December 2018: by February his telenovela actress wife had announced she was leaving him.

It’s unclear whether Mr Trump would have given leeway for such a humiliation.

It remains feasible that he lives in Mar-a-Lago, post-presidency, to avoid the hatred felt for him in his hometown of New York City. He would have more freedom and a warmer welcome; Ms Trump could then resume her life inside Trump Tower.

"Jill and I send our thoughts to President Trump and First Lady Melania Trump for a swift recovery," Biden said as America and the world digested the bombshell news overnight that Trump has contracted the coronavirus.