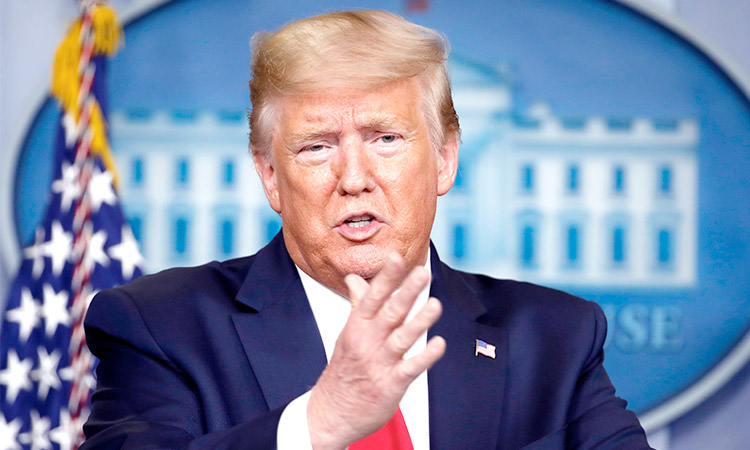 President Donald Trump talks to the media at the White House in Washington. File/Associated Press

The world will not be free of Donald Trump even though the result has been called in the US presidential election. Until he leaves the White House on January 20th next year, he will continue to claim the election was stolen and the victory of Democrat challenger Joe Biden fraudulent.

During Trump’s remaining time in office he intends to fight tooth and nail to build on his destructive legacy by reversing progressive policies, putting conservative Republicans in federal judgeships and other key positions, and firing senior civil servants. From now until inauguration day will be very dangerous period for the US itself and the world at large.

Trump has always refused to become a loser and has constructed a fantasy universe where he is always the winner. Furthermore, the Republican party and his “base” of supporters have encouraged his myth-making. Consequently, once out of office he is unlikely to concede the election and get out of our faces in news cycles and on social media. There will be little relief from omnipresent Trump, the third one-term president since Republican Herbert Hoover was defeated by Democrat Franklin D. Roosevelt in 1932.

Although Trump has lost this election, Trump is in a strong position to create trouble. He increased the number of votes he received from nearly 63 million in 2016 to 70.6 million in 2020. Although Biden won 75 million, nine million more than Hillary Clinton in the previous race, this is unlikely to impress Trump or his loyal politicians in the Republican party or his multitude of followers. Instead of being downcast by the result of the election, they are energised by it and can be expected to assert themselves in the legislature, in the streets, and on social media. His gun-toting violent admirers have been encouraged to become even more disruptive than they have been during his term in office. He has made the party subservient to his will well and truly divided the US against itself.

Although Democrat President-elect Joe Biden hopes to appeal for bipartisan support in the House of Representatives and Senate and heal the wounds inflicted on the populace by the bitterly contested election, he will find these Herculean tasks nearly impossible to perform in a country where Trumpism has triumphed, boosting nativism and intolerance and where gun ownership is prevalent and militias roam freely. A deeply flawed man who has cultivated a cult of personality, Trump has brought out the worst in fellow citizens and will continue to bank on hatred and ugliness.

On the domestic scene, he will try to use his waning weeks in office to kill the Affordable Care Act, dubbed “Obama Care,” the major achievement of the previous administration. Trump pro-claimed his intention of doing just this during his 2016 campaign but has, so far, not been able to deliver on this pledge. He has also been unable to implement promises to build a “beautiful wall” along the US-Mexican border and to make Mexico pay for it. Along the 1,000-kilometre border, he has built 24 kilometres of new wall and 563 kilometres of replacement barrier. Other sections of the wall are either under construction or under preparation for construction. He will try to ensure that the wall will go forward. He also failed to persuade Mexico to pay for the wall and was compelled to filch funds from the defence budget to finance his pet project. Biden is likely to suspend work on it as it is not a priority with him.

Biden has an urgent to-do list of policies to implement as soon as he takes office, all involving the repudiation of Trump’s destructive legacy. The first item is cancellation of the ban on travel to the US by citizens of 13 Muslim and African countries. This will be a boon to students seeking education at US universities and families split by the ban. He will restore the “dreamers” plan which will restore the right to remain for children who were brought to the US as children and threatened with deportation by Trump. Biden will set up a coronavirus task force which will draw up a plan for seriously tackling the virus – which Trump has dismissed and refused to do. On the foreign scene, having done his utmost to kill the 2015 deal providing for reduction of Iran’s nuclear programme in exchange for sanctions relief, Trump will also try to harden the punitive sanctions regime on Iran and ensure that secondary sanctions on governments, firms and individuals seeking to do business with Iran or allies of Iran like Syria will remain in place. Trump’s use of sanctions to exert “maximum pressure” on Iran to force it capitulate to a dozen demands put forward by hawkish Secretary of State, Mike Pompeo, has failed to change Tehran’s regional posture. Instead, Iran’s economy has shrunk, its currency has fallen in value, and millions of Iranians have been thrust into poverty. In Iran Covid-19 is rampant at a time when medicines needed for diabetics and heart patients are not available. Collective punishment is forbidden by international law and a crime against humanity but this does not bother Trump or his supporters.

Biden has said he will return to the deal once Iran is in compliance. He was a strong advocate of the deal while a member of the Obama administration and is eager to revert to it as a means of reintegrating Iran into the international community in the belief that Iran will moderate its policies. In this effort, Biden will have the backing of Europe, China, India and other countries which seek to normalise relations with Tehran and invest and do business in Iran and import its oil.  Having marginalised and starved the Palestinians of funds, Trump will also try to provide Israel with new gifts although he has already upended international policy on the Palestinian-Israeli conflict to serve the interests of Israel’s Prime Minister Binyamin Netanyahu. Biden has said he would revert to the “two-state solution” providing for the creation of a Palestinian state in territories occupied by Israel in 1967, resume US donations to UNRWA, the UN agency responsible for Palestinian refugees, and press for negotiations between the two sides.

On the planetary scene, Biden has also promised to return to the Paris climate accord and to promote a “green agenda.” Gulf Today’s source in the environmental lobby in Washington is celebrating his victory and expects the new administration to recognise and act on global warming in contrast to the outgoing Trump administration which remains in denial and continues to carry on with polluting policies. Biden will also return to the US to the World Health Organisation from which Trump withdrew.

Ironically, Biden will have to rely on executive orders to carry out his agenda as has Trump because the legislature remains divided and unable to adopt major legislation.