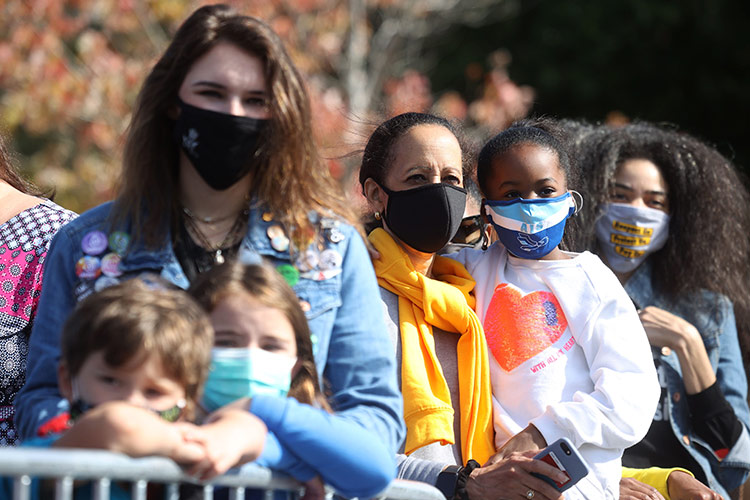 Supporters look on as Kamala Harris speaks during a drive-in campaign in Duluth, Georgia. AFP

The US completes voting on Tuesday in the most consequential election since Democrat Franklin D. Roosevelt won in 1932 in the wake of the Great Depression.

Voters who have not already cast their ballots go to the polls in all 50 states and territories. The turnout is expected to be high and lines at polling stations long despite fears of coronavirus infection. Scuffles and, perhaps, even violence could erupt if supporters of Republican incumbent Donald Trump harass voters in heavily Democratic districts. To avoid the risks of Covid and Trump thugs 91 million, more than half of the expected turnout, took advantage of early voting.

Some 250 million of the 331 million US citizens are of voting age but turnout normally hovers around 55 per cent. In the 2016 presidential election, won by Trump, only 138 million voted. Around 33 per cent of voters are identified as Democrats, 29 per cent as Republicans and 40 per cent as independents who are nearly evenly split between the main parties.

This election can be compared with that of 1932 because Roosevelt stood against Republican incumbent Herbert Hoover who totally mismanaged the US response to the catastrophic economic collapse of the 1930s. This year, Democrat Joe Biden is challenging Trump who has disastrously mishandled Covid-19, the contemporary counterpart of the Great Depression. More than nine million US citizens have caught the disease and 230,000 have died. Experts argue that 183,000 lives could have been saved if Trump, who had been warned early in January of the rise of the virus in China, had taken action after the first US case was confirmed on January 20th. Trump dismissed Covid as a “little flu” and has refused to deal with it. Hoover has been known as the worst ever US president but Trump is said by many to overtake Hoover.

Fallout of Trump victory on China,Russia

The 1932 election was not close. Roosevelt swept to victory in a massive landslide and went on to rescue the US with the New Deal which provided work for the unemployed, relief for farmers, welfare for youth and the elderly, and financial reforms to prevent another depression.

There will be no repeat of Roosevelt’s landslide this year. The US is united by Covid contagion but divided equally over how to respond to the virus. The race is tight and cannot be called. The outcome depends not on the popular vote but on pockets of voters in half a dozen “swing states” who will determine the Electoral College decision on the winner. In 2016, Democrat Hillary Clinton won 2.9 million votes more than Trump but lost the Electoral College. Trump won “swing state” Michigan by only 10,000 votes and there were close results other “swing states.” This year securing Michigan, Ohio, Pennsylvania, North Carolina, Wisconsin or Florida rather than all 50 states will dictate who wins.

The result is likely to be contested and challenged, prolonging the agony of uncertainty over who will be the occupant of the White House on January 20th next year. Whoever that is, during the final months of this term Trump is certain to enact as many detrimental, regressive conservative policies as he can manage as the legacy of his disruptive and destructive incumbency.

Donald Trump is not Herbert Hoover and Joe Biden is not Franklin D. Roosevelt.

Trump offers another four years of himself, of Covid denial, of chaos in domestic and foreign policies, of Trump constantly in the face of everyone on the planet who follows the news. He pledges four more roller-coaster years which could crash the flawed US version of democracy.

Biden promises domestic healing and an escape from melodrama. He pledges a new deal for containing Covid, relaunching the economy, combating climate change, and tax reforms which would put money into the hands of the poor and middle class.

If Trump loses he will follow Hoover, Jimmy Carter, and George H.W. Bush by becoming a one-term president. Trump will have lost due to the invisible Covid enemy.

The US and the world would have been spared Trump if Clinton had won four years ago. By contrast with Trump who filled his administration with billionaires, sycophants and party hacks, Clinton would have surrounded herself with competent people who can run a country. Instead of insanely hollowing out the US government and sowing anarchy and conflict at home and abroad. Clinton would have brought sanity and order to dysfunctional Washington, addressed the concerns of marginalised communities, and cultivated good relations with foreign governments.

If Clinton had the backing of both houses of Congress, she would have made a major effort to strengthen the Affordable Care Act, enacted during the Democratic Obama administration, but loathed by Republicans. This would have helped the US to better confront Covid. Unlike Trump, she would have tackled Covid early, consulted scientists rather than cranks, and done her utmost to contain Covid, perhaps, entitling her to a second term.