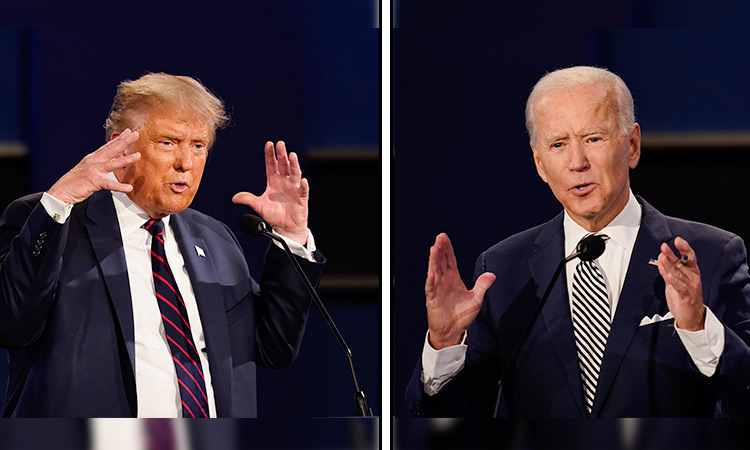 This year’s US presidential and Congressional elections are the most consequential in history for both the US and the globe. They are of major importance because they will decide whether or not the US emerges as a governable country which can again assume an influential role on the world stage.

While opinion polls give the advantage to challenger, former Vice President Joe Biden and his Democratic Party, the polls cannot be trusted to conform to the wishes of a fickle electorate made volatile by the antics of incumbent Donald Trump whose excesses are supported by subservient Republicans.

There are four possible results. Trump is re-elected and his Republican Party loses the House of Representatives but retains control of the Senate. This is the current destructive, unstable scenario which would allow Trump to carry on with his chaotic reign for another four years.

Trump secures the White House but the Republicans lose both the House of Representatives and the Senate. Trump’s autocratic, impetuous initiatives would be curbed as the Democratic opposition would control the purse. This would restore to a certain degree the checks and balances among the three arms of government — the executive, legislature and judiciary. Trump could be expected to rely on executive orders, as he has done during his first term, but these would be challenged in Congress and the courts.

Biden gains the presidency and the Democrats keep control of the House but lose the Senate. This would be a bad result as the Senate would continue to be in a position to block legislation designed to reverse some of the damage Trump has done. However, in the absence of Trump, moderate Republicans might opt for bipartisan cooperation rather than constant confrontation and obstruction with the aim of adopting legislation on essential matters such as an economic stimulus package to provide financial aid to individuals and businesses harmed by the coronavirus.

Biden is elected and the Democrats win both House and Senate. This would enable the Democrats to rescue the Obama-era health care act Republicans repudiate, reinstate environmental regulations Trump has overturned, expand the Supreme Court in order to prevent conservative and regressive Republicans from overturning progressive laws, and repair relations with allies.

There is concern that Trump could declare victory if, as polls close, he appears to be ahead. However, in previous elections the situation has changed when all the votes, including mail-in and absentee ballots, are counted. This can extend counting time by hours, days and even weeks if there are disputes over the validity of ballot papers. In this election disputes could very well happen as many Democrats have chosen not to go in person to polling stations because they do not want to stand in lines due to fear of covid infection. If counting votes takes time, the US could face days of uncertainty at a time of high tension. Uncertainty could lead to challenges over the legitimacy of the election and other problems.

Whatever the outcome, the “culture wars” raging across the US will not be stilled. In or out of office, Trump can be counted on to drive division and cultivate antagonism between his followers and detractors. He thrives in a contentious atmosphere. He is well aware that the politicians in Washington are incapable of solving problems which alienate urbanites from rural dwellers, the megacity coasts from the rural heartland, poor from rich, whites from coloureds, and women from men.

Win or lose, Trump will seek to maintain his firm grip on the docile Republican Party and his alienated, disturbed “base” of followers. Trump’s white supremacist supporters could feel empowered to commit attacks against Blacks and Browns, Democrats, independents and liberals. Trump and his loyal media outlets will incite them to act. Republican state governors and officials will do little or nothing to stop them. Trump has let the twin djinns of right-wing radicalism and violence out of the bottle.

If he loses, Trump cannot be expected to follow the example of George H. W. Bush, the most recent one-term US president, and stand down with dignity. Trump has said he plans to stay on in office whatever the result. If forced to vacate the White House after the inauguration on Jan.20, he will rail and roar over being cheated by mail-in votes and Democratic Party mischief although he has been the main mischief-maker during this campaign.

Since Trump is permitted by law to serve a second term, he could continue campaigning until the next presidential election in 2024, thereby further destabilising the country. Or, he could delegate one of his dreadful progeny to carry on his fight.

If Biden and the Democrats have a clean sweep, Trumpites in the House and Senate can be expected to try to sabotage their policies as they have done to the legacy of ex-President Barack Obama. Republican governed states could lodge legal actions against federal laws and regulations adopted by Democrat-majority votes.

Even if the Democrats are victorious in the races for the White House, the House of Representatives and Senate they will not be able to repair the damage done by Trump, the Republicans, and loyalists in the justice department and elsewhere. This will take far longer than four years and will involve a bitter struggle which could deepen the cultural divide between Trumpites and the majority. This will mean that the US will be preoccupied by domestic insecurity and will expend less energy on foreign affairs than is required.

Biden can rejoin key agreements, including the Paris accord on climate change and the Iran nuclear deal, but Trump has already inflicted such serious damage on US standing in the world that re-accession could be nearly meaningless. On the climate accord, Biden would have to make a major effort to tackle polluting emissions in the US. On the Iran deal, he would have to lift recently imposed US sanctions on Iran and its regional allies and end secondary sanctions which prevent foreign governments, banks, firms and individuals from doing business with Iran. Biden could, however, face opposition from both Democrats and Republicans in both houses of Congress in these endeavours.

Failure to rectify Trump’s destructive foreign policies will continue to undermine US global standing. This has been given impetus by the loss of confidence across the world in the people of the US who gave Trump his 2016 pyrrhic victory.