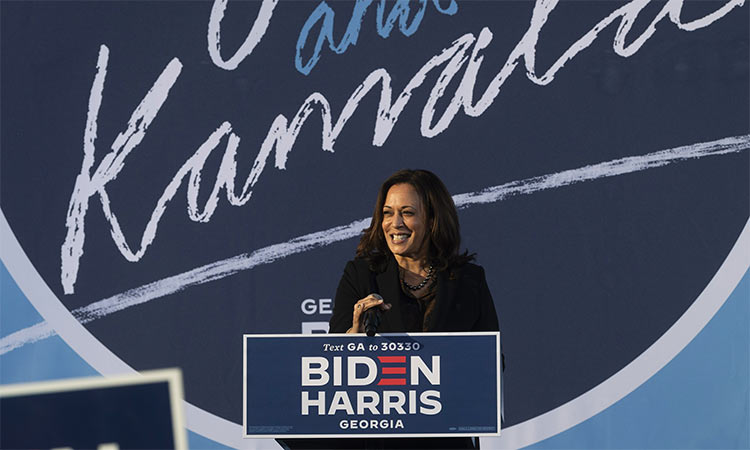 Kamala Harris addresses a gathering during an election campaign.


After months of the president accusing Joe and Hunter Biden of corrupt business dealings in China, The New York Times dropped a bombshell report on his own business dealings in China. The report cited Trump’s tax records, revealing that not only has he pursued licensing deals with Chinese-owned entities, one of Trump’s LLC’s has a bank account in China and paid $188,561 in Chinese taxes between 2013 to 2015. In 2017, after Trump won the presidency, his Chinese bank account received an unusual $17.5 million spike in revenue, $15.1 million of which Trump himself withdrew.

This is on top of the Chinese trademarks approved for Ivanka Trump after Trump became president and the multiple Chinese nationals purchasing Trump properties. We also don’t know exactly who owns the at least $1 billion in Trump debt.

Despite this context, what was one of the first things President Trump did on Friday morning? With absolutely zero self-awareness or shame, he tweeted this Breitbart headline: “WSJ Editorial Board: Joe Biden Must Answer Questions About Hunter Biden and China.” The Wall Street Journal cited the New York Post’s unsubstantiated “reporting” sourced from a flash drive provided by Rudy Giuliani, which was so dubious that social media companies limited its reach and the FBI launched a probe to see if it was part of a Russian intelligence operation.

I won’t elevate any of the specifics, but in order to highlight the mind-boggling projection more effectively, I’ll cite an excerpt. The Wall Street Journal clip President Trump shared alleged that: “The Biden family partners are often foreign governments... Some deals have even involved US taxpayer money. The cast of characters includes sketchy companies, violent convicted felons, foreign oligarchs, and other people who typically expect favors in return... The Biden family’s apparent self-enrichment depends on Joe Biden’s political influence and involves no less than five family members.” You could literally replace every mention of “Biden,” input “Trump,” and it would be 100 percent accurate.

“Lock him up! Lock him up! Lock him up!” That baseless call for the extrajudicial jailing of Biden can now be heard from maskless Trump supporters at every rally the president holds. Trump has latched onto this projection narrative and even went as far as to call Biden’s family a “crime family.” Is he sure he wants to go there?

President Trump has been impeached, Trump University settled a $25 million fraud lawsuit, the Trump Foundation was forced to shut down after criminal self-dealing, and nearly every organization Trump has ever run has been under investigation at one time or another. Ivanka Trump and Donald Trump Jr. barely escaped prosecution for allegedly defrauding customers at their Trump SoHo property, and the Eric Trump Foundation allegedly misled donors and engaged in self-dealing. The Trump Organization is currently under investigation for potential tax and bank fraud by multiple New York investigators.

If you only watch and read right-wing propaganda, you might think that America isn’t currently barreling into another huge wave of coronavirus cases and that Hunter Biden is the gravest threat facing America since the imaginary Blacktifa suburban invasions of summer 2020. But that just isn’t anywhere near approaching the truth.

Aside from attacking Dr Anthony Fauci and Governor Gretchen Whitmer, President Trump’s closing message appears to be a dubious attempt to portray Joe Biden and his family as equally corrupt and amoral as his own family. In 2016, Trump tried and unfortunately succeeded in doing this to Hillary Clinton with smears on her character and calls to lock her up. But luckily for Biden, he hasn’t been on the receiving end of decades of right-wing propaganda like Clinton. Biden also has higher favourables and doesn’t have to grapple with the misogyny Clinton faced.

What we’re witnessing right now is a final desperate attempt to recreate the environment of the 2016 election through projection and disinformation. It won’t work. The American people are smarter than President Trump thinks we are, and quite frankly, we’re tired of his nonsense. That’s why, despite it all, we will beat him on November 3rd.