Iraq and Lebanon: A tale of two nations - GulfToday

Iraq and Lebanon: A tale of two nations 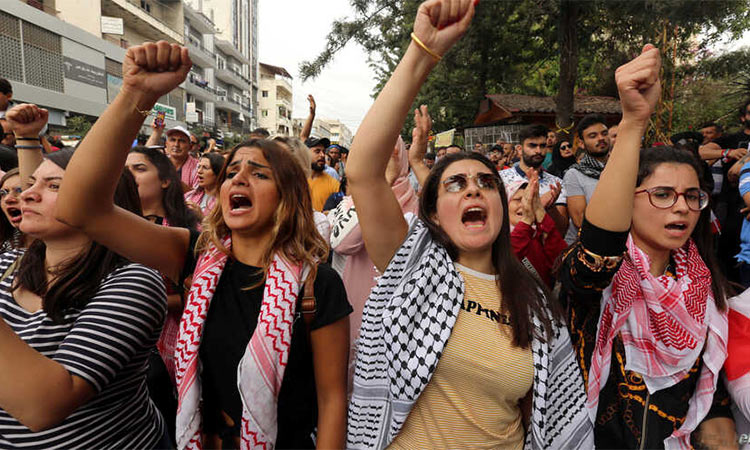 Demonstrators shout slogans during an anti-government protest in the southern city of Nabatyeh, Lebanon. File/Reuters

Last October Iraqis and Lebanese rose up against misrule, corruption, rampant unemployment and the lack of essentials like water, electricity and decent health care and education.  Demonstrations in Iraq have been led largely by youngsters, while in Lebanon all sectors of the society have taken part from the outset. Both Iraqis and Lebanese blame their corrupt, unaccountable, sectarian political systems for economic and social meltdown and seek “regime change” to a secular democratic model.

While Iraq and Lebanon are very different countries with very different histories, their “October revolutions” have, in recent months, become inextricably linked.

The two countries were tied in 2003 when Washington imposed Lebanon’s failed sectarian model of governance on Iraq following the US occupation of that country. The presidency was allocated to a Kurd, the prime ministry to a Shia, and the parliamentary speakership to a Sunni.  Other senior roles were divided among the main communities. This system reproduced the destructive patronage and clientelism that has plagued Lebanon since independence in 1943.

The US also —  irrationally — installed in power representatives of the main expatriate opposition groups although most were Shia fundamentalists closely allied to Tehran, Washington’s regional rival. Finally, the US dismissed members of the former ruling Baath party from the administration and disarmed and demobilised the Iraqi army. Once Iraq had been rendered defenceless against domestic and foreign enemies, Al Qaeda quickly infiltrated the country and built up networks of outcast soldiers, outlawed Baathists, and religious radicals to resist the US occupation. While the US, the reconstituted Iraqi army, reinforced by Sunni militias, managed to contain Al Qaeda during 2007, they could not meet the challenge  mounted by the “caliphate” stretching from Raqqa in Syria to Mosul in Iraq established by Daesh in 2014.

Shia Grand Ayatollah Ali Sistani urged members of his community to mobilise in the fight against Daesh. Once the “caliphate” was defeated, the militias supported by Iran morphed into political parties which have played the determining role in Iraqi political life. Therefore, Iraqi revolutionaries face not only Iran-linked sectarian bosses and warlords determined to hang onto power but also affiliated armed groups which have slain hundreds of protesters and kidnapped and disappeared

scores. Nevertheless, Iraq’s revolutionaries have had some success. They have encouraged Iraqis to protest against years of injustice, poverty and neglect and demanded not only reform but regime change. They brought down the government of Adil Abdel-Mahdi in May this year.  He was replaced by a somewhat more sympathetic figure, the former intelligence chief Mustafa Al Kadhimi who has attempted to maintain control over both protesters and anti-protest militias, promised early elections, and tried to maintain a balance between former US occupier and neighbouring Iran.

Kadhimi’s job has been made somewhat easier by Donald Trump’s decision to pull 3,000 of the 5,200 US troops out of Iraq and by Iranian supreme leader Ayatollah Ali Khamenei’s call on Iraqi Shia militiamen to suspend operations against US troops and facilities in Iraq. On one hand, Trump wants  to “bring the boys home” by Christmas.  On the other, Iran and its Iraqi militia allies do not want violence against US personnel and interests to give Trump a pretext to attack Iraq or to delay the US troop pullout. A US withdrawal will, ineluctably, strengthen the militias as well as Iran’s position in Iraq as well as weaken the revolutionaries.

While backing away from a possibly explosive engagement with Iran in Iraq, the Trump administration has stepped up his “maximum pressure” campaign on Tehran by intervening in Lebanon.  There the US has imposing punitive sanctions on Iran’s allies, Hizbollah and the Syrian government. These sanctions have already had serious negative impacts on both Lebanon and Syria. The aim of the latest measure, the Caesar Law, is to punish all external actors providing aid to or doing business with the Syrian government.  Hizbollah and its affiliates in Lebanon have already been targeted.

This round of sanctions effectively cuts off all formal trade between Lebanon and Syria, harming both at a time their economies are collapsing and currencies falling in value. By preventing investment in Syria’s reconstruction, the US hurts Lebanon, a former part of Syria, which retains close political, economic, and personal ties with that country.  Lebanese goods transiting Syria for Iraq and Jordan fall under the sanctions regime, depriving cash starved Beirut from earning transit dues and tariffs  Impoverishing Syria, impoverishes Lebanon.

The Caesar Act prompted Hizbollah and Amal to scupper the efforts of ex-Lebanese Prime Minister designate Mustapha Adib to form a cabinet of independent experts at the end of September.  Fearing they could be marginalised by a Western-leaning government with close ties to US ally, France, they demanded the finance portfolio which has, in recent years, been held by a Shia. They could very well take the same line with Adib’s successor, Saad Hariri, named last Thursday, if they feel their political role in Lebanon is threatened.  Hariri is already in a weak position because he did not have the initial backing of two major Maronite Christian parties: the right-wing Lebanese Forces headed by ex-war lord Samir Geagea and the Free Patriotic Movement chaired by Gebran Basil, the son-in-law of President Michel Aoun.  Basil has been put on the list of sanctioned individuals.

Like their Iraqi compatriots, Lebanon’s October revolutionaries face too many challenges. They have protested against Hariri’s return but they can do

nothing to slow or halt the economic, political and social crises in their country. Furthermore, they cannot go too far in their opposition to Hariri. Lebanon needs a prime minister who can take action. Hariri has promised to do what he and his predecessors, so far, failed to achieve by effecting reforms which could unlock $21 billion in international funding which could rescue the country from catastrophe.  If the politicians allow him to succeed, they will expect he will also preserve the sectarian system which has destroyed the country, thereby defeating the revolutionaries demanding governmental system change. 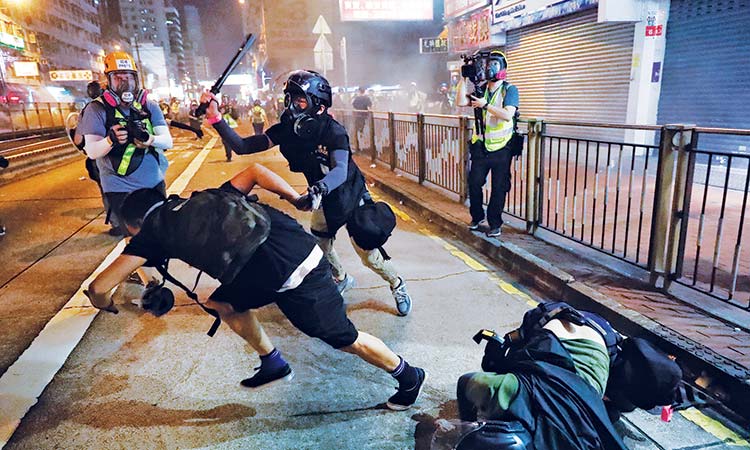 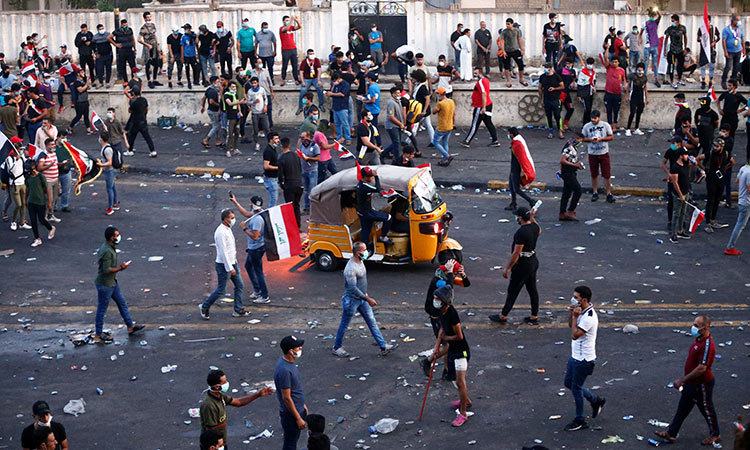 Mass demonstrations continue in Lebanon and Iraq with protesters demanding the fall of their governments, removal of and accountability for corrupt politicians, and an end to the secular systems 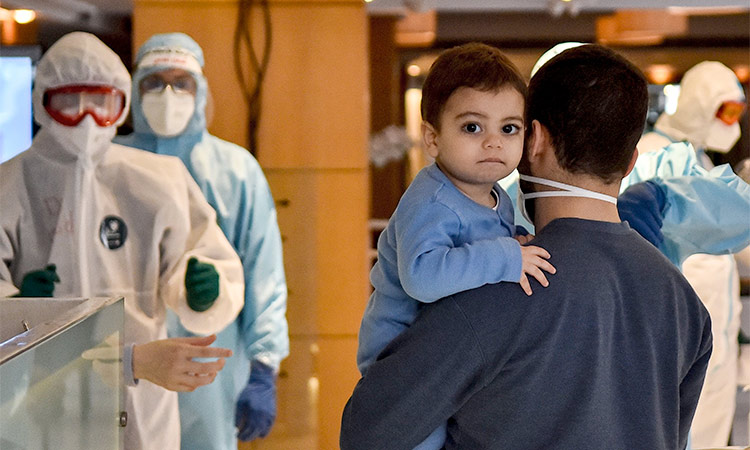 Inventive Lebanese and Iraqi revolutionaries driven from the streets and squares of their countries by coronavirus lockdowns are devising new means of sustaining their demands for thorough-going political reform.