Forecasts put the Democrats on course in US - GulfToday 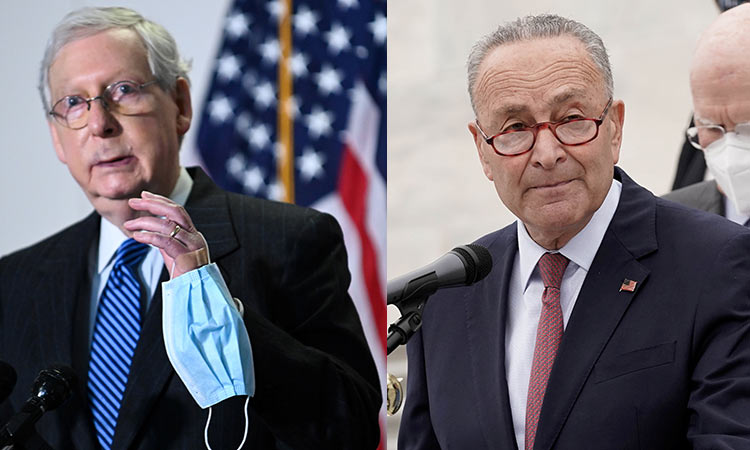 
Joe Biden winning the presidency is speeding toward a foregone conclusion if his expanding polling lead is to be believed. But if Biden has any governing objectives outside of ridding America of Donald Trump, he’ll need his party to win the Senate, too. Today that’s an outcome much more in doubt, according to the major forecasting models.

RealClearPolitics sees a razor thin margin for the Democrats — 51-49 if toss-ups are decided in favour of the current leader in polling, regardless of margin. That’s a net change of four seats from the current 53-47 margin in favor of the Republican Party. And it would hand control of the chamber from Kentucky’s Mitch McConnell to New York’s Chuck Schumer.

But other models are more bullish on the prospects of a Blue Wave. Princeton Election Consortium forecasts a 53-47 edge when the votes are counting for the Democrats. And FiveThirtyEight sees a 74% chance of Democratic control by any margin but on Saturday switched its forecast from 51 blue seats to 52.

Historically, the votes in Senate races closely track the winner of the presidential race in those states, about nine times in 10, according to Pew Research. So this is where the national margin in the race comes most into play. The bigger the national margin, the bigger the expected haul of electoral votes and thus state victories for Biden. If the former vice president translates his current polling advantage of about 11 points into actual votes, then he will likely prevail in Georgia (where two seats are in play but probably only one on election day, as it’s subject to a later run-off) and possibly even Texas.

Additionally, the overall support for the Democrats is threatening to upend once seemingly solid red Senate races in South Carolina and Alaska. Furthermore, a never-Trumper former Republican state senator in Kansas is faring shockingly well as a Democrat in an open seat, where spending records are being set.

The financial disparity in favor of the Democrats is unprecedented, more than double what the GOP has raised in the 14 top races nationwide. ActBlue, the Democratic fundraising website, raised $1.5 billion from July through September compared with $600 million from “WinRed,” the GOP’s website. South Carolina’s Lindsey Graham, unaccustomed to even a tight race never mind being severely outspent, has been forced to “beg” supporters for money on Fox News.

While money is certainly a measure of enthusiasm, the question remains whether it will translate into votes. The key is turning races that once leaned GOP into toss-ups, given that in a wave election, toss-ups tend to break for the side that wins the presidency.

“It’s very clear from what we are seeing in polling and fundraising numbers that the momentum and enthusiasm is on the Democratic side,” said GOP strategist Doug Heye. “When an incumbent (president) is unpopular, he takes people with him, and that’s the concern now.”

Republican senators not up for election this cycle agree.

“(The debate) is going to be, ‘What the heck were any of us thinking, that selling a TV-obsessed, narcissistic individual to the American people was a good idea?’ We are staring down the barrel of a blue tsunami.”

Ted Cruz of Texas, who ran against Trump and suffered through attacks from the President against his wife and father, said, “I think we could lose the White House and both houses of Congress, that it could be a bloodbath of Watergate proportions.”