The Proud Boys have at most a few thousand active backers and often march with other far-right armed factions, including neo-Nazis.

During the first US presidential campaign debate Donald Trump was asked about the “Proud Boys,” a white supremacist militia, he said he knew little about them but called on them to, “Stand down and stand by.” This suggested that if in need, he would ask them to mobilise. The heavily armed, aggressive Proud Boys promptly issued T-shirts printed with these five words and, presumably, cleaned their weapons. When his words caused alarm across the US, particularly with law enforcement, Trump, unconvincingly, tried to delete the “stand by” part of his message.

In a telling interview, Oscar winning documentary filmmaker Michael Moore made the point Trump is the first US leader such groups have had in the White House. They have been allowed to organise and arm for decades due to support from conservatives and evangelical Christians although US Homeland Security considers them the greatest threat to domestic security since they seek to overthrow the government and delete democracy.

The  Proud Boys is a far-right, anti-immigrant, keep-women-in their-place, all-male armed group which supports Trump and has repeatedly engaged in street violence against left-wing activists loosely labelled “anti-fa,” or anti-fascist. The Proud Boys have at most a few thousand active backers but they have hit the headlines by engaging in street battles with leftists in Portland, Oregon. They often march with other far-right armed factions, including neo-Nazis.

Smaller radical-right paramilitary factions, such as the “Michigan Militia,” and the “Wolverine Watchmen,” have also been encouraged to prepare for violence by Trump who called on citizens of the Covid locked-down, masked and socially-distanced state to “Liberate Michigan.” While the Wolverine Watchmen were formed before his declaration, they clearly took heart from his mindless words as they and members of the Michigan Militia occupied Michigan’s State House and demanded “liberation” from covid restrictions.

The Watchmen have gone much further in their quest for “freedom.” So far, 14 Watchmen members have been charged in a plot to kidnap Michigan Governor Gretchen Whitmer due to her strict measures to contain covid. Seven of the men have been identified as core Watchmen members while the others, including two from out of state, have been accused of being accomplices. They staked out her vacation home, trained on firearms, and manufactured and detonated a trial explosive device as they planned to use a blast to distract police while they snatched Whitmer. There is enough evidence to charge five with conspiracy and terrorism.

On Oct.11, the Detroit Free Press carried a long investigative article identifying and describing the background of each of the main suspects. They were described as a “baker’s dozen of disaffected men whose anti-government attitudes show up in everything from seat belt violations to forgery.” Aged between 21 and 44, they have “troubled pasts,” exhibit a “military mindset” and possess weapons of war.

Vocal individuals vented their anger on Facebook, where they were traced and tracked by law enforcement. Quiet members kept silent. Most live in small rural townships on unpaved roads, their homes surrounded by rusting cars, discarded tyres, and rubbish. They had little interaction with neighbours. They were not friends but cockeyed militants committed to an ill-defined cause. Their education goes no further than high school and they had trouble holding down jobs. Trump would call them “losers.”

The more sympathetic Moore, a Michigan-born resident of the state who has spent time with the Michigan Militia, disagrees. He says they simply want decent jobs that give them $60-70,000 a year. Militiamen he met some years ago told him they arm because they want to be noticed and some of their demands to be met. The Wolverine Watchmen were prepared to go to great lengths to get noticed. They entertained abducting the governors of Virginia and Wisconsin, both Democrats, as well as Wilmer. Trump had also called for the “liberation” of the other two states from covid restrictions.

Michigan hosts more than a dozen armed radical-right factions. Moore explained that a great many men lost employment when the auto industry, the manufacturing powerhouse of the state, began to decline and cede its prominent place in the economy. Restructuring of the industry also led to job losses. In 1965, auto and auto parts production accounted for 25 per cent of the state’s output. Today this is 7.2 per cent. While farming is a leading sector in Michigan’s economy, producing 21 per cent of output and employing 17 per cent of the workforce, it is significant that many radicals come from rural areas but are not engaged in farming.

Radical right-wingers can be extremely dangerous. On April 19, 1995, an ex-soldier from called Timothy McVeigh detonated a bomb-laden lorry in front of the federal building in Oklahoma City. He killed 168 people, including 11 children, and wounded 680 in the worst home grown terrorist attack in US history. His accomplice and former roommate Terry Nichols, a resident of Michigan, was also arrested. Deeply disturbed McVeigh had ties with the Michigan Militia although the relationship has not been thoroughly investigated. McVeigh was executed by lethal injection in 2001 while Nichols remains in prison, sentenced to life without parole.

Writing in the Washington Post on Oct.16, former Assistant Secretary of State for Homeland Security, Elizabeth Neumann pointed out that experts have identified as risk factors of violent extremism “social isolation, financial stress, job loss, loss of loved ones and significant changes or uncertainty in life.” She said that some, like the Wolverine Watchmen, have been motivated by safety and public health measures they consider to be restricting their freedom and violating their constitutional rights.

The Proud Boys, Michigan Militia and Wolverine Watchmen are relevant to this region and the wider Muslim world as the backgrounds and motivations of their members mirror those of the men and boys who join Daesh and al-Qaeda. Largely adrift, left behind by their societies and neglected by governments, individuals find homes and identities in radical organisations and assert themselves by carrying weapons. They are driven more by alienation and revenge than by faith. They are misogynistic, accept dictation from their leaders without question, and are taught to hate anyone who does not think the way they do. Like US radicals, they are the most potent threat today to stability in their home countries and the wellbeing of fellow citizens.

US President Donald Trump has tested negative for the novel coronavirus, the White House physician said on Saturday. 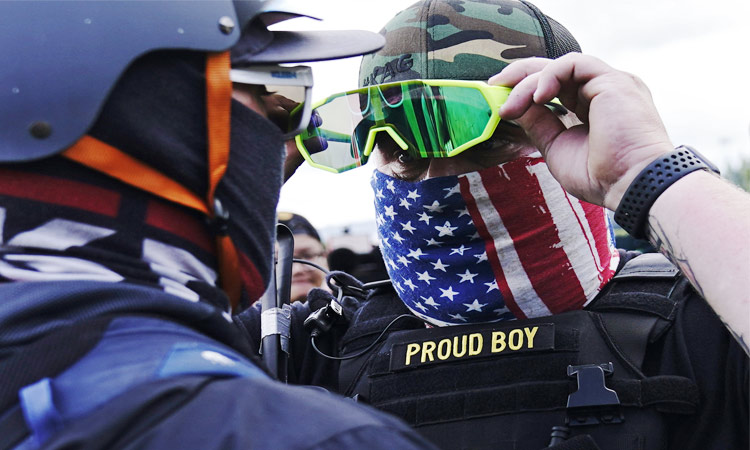 Trump says he condemns all white supremacists including ‘Proud Boys’

President Donald Trump said on Thursday he condemned all white supremacists including the “Proud Boys,” an organization identified as a hate group, further walking back comments he made this week that were viewed as emboldening the group.