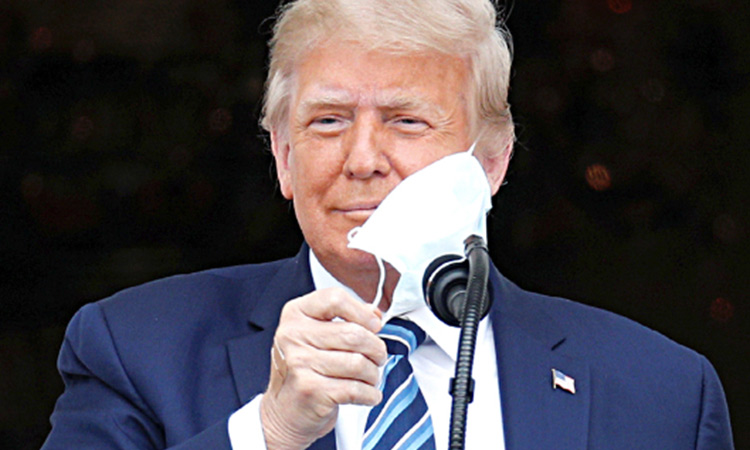 US President Donald Trump takes off his face mask as he comes out on a White House balcony. Reuters

Trump’s medical team announced he had tested negative and was no longer contagious as he jetted to Florida – the first of four battleground states he plans to visit over the next four days. Gulf Today delves deeper


Immune to Covid! Stronger than Joe Biden! Superman? Not quite, but Donald Trump wants America to know he’s back. “Here we are!” he cried with a triumphant roar — made slightly hoarse by his bout with COVID-19 — at the opening of a rally in Sanford, Florida, on Monday.

Just a week after getting out of hospital with the coronavirus, Trump strode onto the stage, tossing out face masks, like a rock star handing out autographs.

But he wasn’t wearing a mask himself. And neither was anyone else, barring a small minority, in the crowd of several thousand, who were jammed cheek by jowl to witness the Republican’s return to the campaign trail.

Which was the whole point.

Trump wanted to show he can defy the pandemic and his seemingly plummeting chances of beating Democratic candidate Biden alike.

Loud, coarse at times, diving into his well-worn jokes, and freely insulting opponents and journalists, Trump didn’t sound like a clinically obese man of 74 who only a few days ago was being administered oxygen by doctors.

“They say I’m immune,” he boasted. “I feel so powerful. I’ll walk in there, I’ll kiss everyone in that audience. I’ll kiss the guys and the beautiful women, just give you a big fat kiss.”

From ditching his mask to parking the iconic Air Force One jumbo right behind the podium, this was a rally stage-managed to push Trump’s image as freak of nature unbound by the laws governing ordinary folks.

Maybe he wasn’t wearing a Superman shirt under his suit, as The New York Times reported he considered doing on being discharged from hospital October 5, but the crowd wouldn’t have been fazed had he done so.

Man without a mask: That defiance was on show even before Trump left Washington.

Waiting for Trump’s motorcade to come snaking across the rain soaked concrete at Joint Base Andrews, staff could be seen mopping and wiping down surfaces in the press cabin of Air Force One.

Unlike on past trips — even throughout the Covid period — staff, Secret Service agents and Air Force personnel all wore masks.

There’d been real tension around the trip: the White House has become a COVID-19 hotspot in the last 10 days, becoming a living symbol of Trump’s hands-off approach to a pandemic that has killed more than 210,000 Americans.

So the White House had assured the traveling pool of journalists that every person boarding the plane would first be tested for the coronavirus and anyone interacting with reporters would wear a mask.

But when the massive motorcade finally rolled up alongside Air Force One, it was jarring to see Trump step from his black armored SUV with no mask, the sole bare face in the entire cavalcade.

With a thumbs up to the press, he quickly boarded the plane, even jogging on one of the steps — an apparently deliberate show of vitality.

The way Trump tells it, his special powers make him invincible against Biden too. Since reemerging from heavy treatment for the coronavirus he has mocked the Democrat’s travel schedule, his mask wearing and coughing.

“He’s got no strength left, he’s got no power left,” Trump told Monday’s crowd. “He may be the worst presidential candidate in history and I got him,” he scoffed.

The polls do not bear this out. They consistently show Trump far behind Biden, potentially heading toward a defeat of landslide proportions.

They show an overwhelming majority of Americans angry at Trump’s handling of the pandemic. They show women and the elderly — two key voting groups — abandoning Trump.

But Trump has spent a lifetime perfecting the art of creating a story about himself and on Monday night in Florida, at least, he was able to tell his story to an audience that hung on every word.

“These are the real polls,” he said, gazing over the thick crowd of supporters in red “Make American Great Again” baseball caps. They cheered.