Reduce the pain of children in conflict zones - GulfToday

Reduce the pain of children in conflict zones 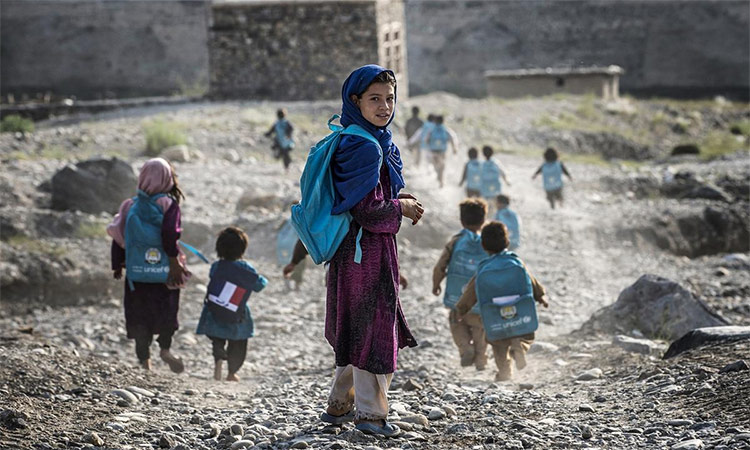 Afghan children run to school in a village on the road to Naghlu, near the French army base. AFP

The revelation by the international aid group Save the Children that 700,000 children in Syria face hunger because of the nation’s economy and coronavirus curbs is sorely distressing.

The new figures mean that in the last six months, the total number of food-insecure children across the country has risen to more than 4.6 million.

After nearly a 10-year conflict that killed some 400,000 and displaced half the country’s population, Syria’s economy has been badly hit by the war and widespread corruption, western sanctions and a severe economic and financial crisis in neighbouring Lebanon.

The utterly poor financial health of the nation has made it difficult for many Syrians to buy food.

Fruits are a luxury for many.

A recent survey reported that 65% of children “have not had an apple, an orange, or a banana for at least three months.”

In northeast Syria, an area controlled by the US-backed Syrian Democratic Forces, almost a quarter of children said they had not eaten those fruits in at least nine months.

Parents therefore have little choice but to cut out fresh food such as meat, fruit, and vegetables, relying instead on rice or grains for weeks.

One mother saved up for three weeks to buy a single apple, which she split five ways between her and her family. At least one in eight children in Syria currently suffer lifelong risks, including stunting or chronic malnutrition.

“A whole generation of children are facing the risk of malnutrition because their families simply can no longer afford to put a meal on the table,” said Save the Children’s Syria Response Director, Sonia Khush.

The spread of coronavirus in the war-torn country has worsened the situation.

Save the Children said an unprecedented number of children in Syria are now battling soaring malnutrition rates.

The Syrian government has registered more than 4,100 cases of coronavirus in areas under its control while there are scores of cases in the last rebel stronghold in the country’s northwest and eastern Syria that is controlled by US-backed Kurdish-led fighters.

The number of cases are believed to be much higher as many Syrians in rural areas don’t know that they are bearers of the virus.

Coronavirus tests at private clinics cost around $60, far too expensive for most Syrians, whose average salary is less than $100 a month. The government conducts about 300 free tests each day for people showing symptoms.

The problem is that those caught in conflict zones have little or no access to medical assistance. Amid the hail of bombs and bullets, an operational medical facility will help save lives, but it is quite a possibility that medical supplies will be short.

It’s not just health that suffers. A 2016 Unicef report says nearly one in four children growing up in conflict zones is missing out on education, with South Sudan, Niger, Sudan and Afghanistan the worst-affected countries.

An estimated 24 million children of school-going age are out of school in 22 countries affected by conflict, according to the agency’s research.

South Sudan has the largest proportion of children out of school, 51 per cent, followed by 47 per cent in Niger, 41 per cent in Sudan and 40 per cent in Afghanistan.

When children are not in school, they face an increasing danger of abuse and exploitation and could even be recruited by armed groups.

For hapless kids in conflict areas, the anti-coronavirus directives of the World Health Organisation (WHO) appear to have hardly any impact. WHO said children aged 12 and over should wear masks to help tackle the COVID-19 pandemic under the same conditions as adults, while children between six and 11 should wear them on a risk-based approach.