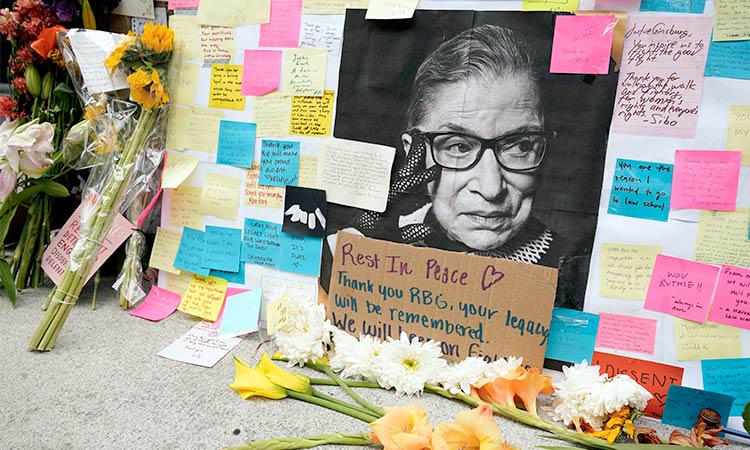 A memorial to US Supreme Court Justice Ruth Bader Ginsburg on the campus of Harvard University in Cambridge, Massachusetts. Associated Press

Republicans are likely to move ahead and fill the current Supreme Court vacancy to replace the late Justice Ruth Bader Ginsburg, even if doing so contradicts the rationalisations they offered in 2016 for squashing President Barack Obama’s nomination of Judge Merrick Garland after Justice Antonin Scalia’s death. On this point, at least, President Donald Trump is honest: “Merrick Garland is an outstanding judge,” Trump said Monday on “Fox & Friends.”

Whatever you hear from Republican senators, Trump is stating the actual principle at work: If you have the votes, you do whatever you want to do.

That’s not entirely wrong. Elections, of course, are supposed to matter, and as Democrats were fond of saying when Obama nominated Garland eight months before the 2016 election, the president is elected to a four-year term. There’s no reason to shut down the presidency after three. Senate elections matter, too, with the advise-and-consent power surely available to Republicans who want to use it to constrain the president (in 2016) or enable it (in 2020).

So what’s wrong with Trump and Senate Republicans rushing to fill Ginsburg’s seat?

For one thing, undue haste is an abdication of Senate responsibilities. Of the last 13 confirmed nominations, stretching back to Scalia in 1986, none were confirmed as quickly as a new Trump nominee would have to be in order to be sworn in before Election Day on Nov. 3. Ginsburg’s 1993 confirmation process came closest, at 42 days. The next shortest confirmation, for Chief Justice John Roberts, took 62 days in 2005. It’s safe to say that Trump’s pick will be more divisive than either of those selections (Ginsburg was confirmed 96 to 3, and Roberts won the votes of half of the Democrats in his 78-to-22 confirmation).

The Senate can move quickly if it chooses to, but only by sacrificing the vetting procedures that have been established for all modern nominees. Rushing to get it done before the election lends credibility to the accusation that Republicans will use any ploy to back up Trump’s threats to cheat his way to victory if the vote doesn’t go his way — something Trump doesn’t even bother to deny.

What’s really startling, though, is how the Supreme Court nomination wars since 2016 demonstrate how severely the normal rhythms of political representation have broken down. The Republican Party and its politicians now reject compromise and see no reason to seek the support of anyone but their strongest supporters, especially when it comes to judges.

This will be the third Trump Supreme Court nomination, and it will surely be the third very conservative and partisan Republican he has nominated. Republicans are still bitter after 30 years about the selection by President George H.W. Bush of Justice David Souter, who turned out to be a mainstay of the court’s liberal wing. That may be understandable, but it’s puzzling that conservative Republicans feel that they have regularly been betrayed by what has been an increasingly conservative court. Republican-appointed conservative Justices Sandra Day O’Connor, Anthony Kennedy and Roberts have taken turns in the court’s decisive centre, with each more conservative than the previous one.

Kennedy was nominated after the very conservative Robert Bork was defeated for a vacancy in 1987. Bork was rejected because he and the agenda he spoke for was unpopular. Bork received only 42 votes, including 40 of the 46 Republicans.

Instead of learning the lesson that relatively moderate conservatives such as O’Connor and Kennedy were acceptable while more ideological conservatives were tough sells, the lesson conservatives took from the Bork (and Souter) nominations was to keep forcing as many Borks as possible onto the court.

Trump won in 2016. He’s president. He has the authority to nominate whomever he sees fit. Senate Republicans can confirm that nominee if they have the votes, as seems likely. But with two Republicans already declaring their conviction that Ginsburg’s replacement should be chosen by the winner on Nov. 3, and at least a possibility that a third will join them, it seems likely that polls showing a that a nomination would be unpopular will hold up after the nominee is selected and Democrats mobilise in opposition. If that happens, Republican incumbents in vulnerable seats will face a very tough vote.

There’s one more thing. Trump’s blunt honesty about the power politics of the selection may seem refreshing compared to the rhetorical contortions being performed by Republicans struggling to articulate a principled rationale for approving a Trump nomination after blocking Obama’s.

It is not. It’s true that one can look at politics in a republic only in terms of winning, losing and power, but that doesn’t mean that it’s the only reasonable way to look at politics — or that it’s best if politicians throw away the veneer of principle, as Trump does. No. It’s in the nature of politics that leaders and citizens talk about choices in terms of what’s good for the nation.

One politician might claim that tax cuts for the rich will help the overall economy, while another might say that soak-the-rich policies will produce more economic growth. One politician could oppose progressive taxation because of a principle of fairness, saying that everyone should pay the same rate; another might argue that progressive taxation fulfils a different type of fairness, with those with the means to pay more asked to do so.

What’s not normal — what violates the spirit of politics in a republic — is for a politician to cease invoking national interest at all and declare that a policy should be adopted because he and his friends would benefit, full stop. Or because he won and he wants it, and there’s nothing anyone can do about it.

Demanding that politicians justify their actions makes it clear when those justifications are, well, bad jokes. That was evident with regard to what Republicans said to justify their blockade of a vacant Supreme Court seat in 2017, and it’s even more obvious now, with the same crew trying to find neutral principles that cover both situations despite clear evidence that they can’t square this circle. Indeed, some Republican senators seem to be giving up and going with the Trump justification — that they don’t need a justification.

And that tells us that something has gone deeply wrong.