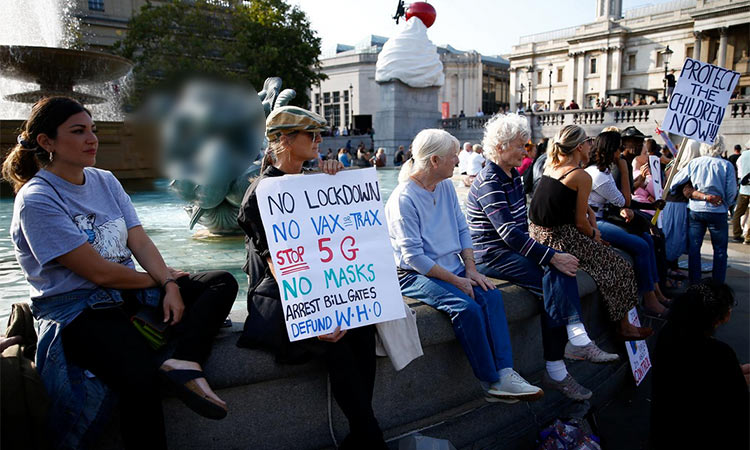 At the anti-mask “freedom” rally in Trafalgar Square on Saturday home-made placards referenced some of the most popular conspiracy theories currently circulating.

There were familiar tropes – QAnon, 5G, Covid-19 as a “hoax” – as well as more niche concerns, from Nicola Sturgeon being “a Nazi” to adherents of WWG1WGA (“Where we go one, we go all”, a line from an old Jeff Bridges film, now being misattributed to president Kennedy and his supposed fight against a global paedophile ring).

Obsessions once dismissed as eccentric are now entering the relative mainstream, with support from the likes of Donald Trump. Is this a flourishing of free thought, a public mental health crisis, or something more coordinated?

The organisation behind recent rallies is deliberately shadowy, giving the appearance of a spontaneous movement – but a little digging reveals a merry band of opportunists and right-wingers seizing the moment.

Several speakers at Saturday’s event were listed as “Doctors”, giving a gloss of scientific credibility to proceedings. One, Dr Niall McCrae, a lecturer at King’s College London, is also a Brexit campaigner associated with anti-EU think tank the Bruges Group.

“There is a video of Dr McCrae apparently verbally abusing a black Remain campaigner at a Brexit Party rally...and poking him with a Union Jack on a flagpole, while another person throws water on the Remain campaigner.”

The Students’ Union statement continues: “Dr McCrae has expressed harmful views in the past, including calling for the burqa to be banned, co-writing an article referring to LGBT+ activists as the “Gaystapo”, and co-authoring a booklet supporting the antisemitic conspiracy theory alongside Islamophobic allegations…”

Another ardent right-winger and Brexiteer who spoke at the rally is Prof Dolores Cahill. Cahill chairs the Irish Freedom Party, which grew out of a 2018 “Irexit” summit attended by Nigel Farage.

Last year, Cahill had to resign from a scientific body over her claims that lockdown and social distancing were unnecessary even for those with underlying conditions, and that those who recovered were “immune for life”.

The Dublin School of Medicine, where she works, disassociated itself from these claims, while the European Commission, a partner of the committee from which she resigned, said they could cause “significant harm” if followed.

So, neither McRae nor Cahill are practising as medical doctors, and both are politically-interested right-wingers, one of whom has been censured and the other apparently investigated by their professional institutions.

Dr Cassie Madej is an American osteopath who believes in transhumanism – and hold onto your tinfoil hats, because this isn’t the plot of an episode of Black Mirror but the serous suggestion that sinister forces want to turn humans into “genetically modified organisms” and “create a new species”, using vaccines as part of their diabolical scheme.

Madej recently released a YouTube video on this which ended with her tearfully pleading with viewers to “start flooding social media” with this absolute nonsense.

Kate Shemirani, the MC of proceedings, is a nurse currently suspended by the Nursing Council for claiming the virus is fake. Shemirani believes NO vaccine has ever worked, and says she cured her own cancer with mistletoe injections and coffee enemas.

The UK would do well to inoculate itself against the dangerous and spurious claims of this cohort, which seem on the whole to have less to do with our freedoms, than their finances.

As comical as these people and their conspiracy theories seem, they are a magnet for not just deluded but dangerous individuals, who will use any trick in the book to manipulate us for their own ends and to our own detriment. A second wave of deadly Coronavirus may not be the worst of the nightmares we are stumbling into.