This is why the presidential race is like no other - GulfToday 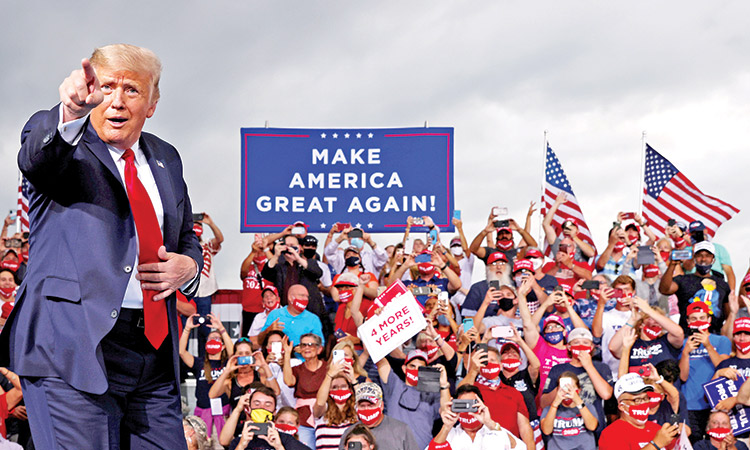 US President Donald Trump gestures during a campaign event at Smith Reynolds Regional Airport in North Carolina, US, on Tuesday. Reuters

After months of stability, the presidential campaign enters the final sprint amid the greatest upheaval the country has faced in more than a generation: a teetering economy, a pandemic and divisions over racial discrimination and policing that have made November’s contest, both sides agree, the most consequential election many voters have ever seen.

The fundamentals of the contest have not changed, though the scheduled debates loom large. Democrat Joe Biden clings to a healthy lead over President Donald Trump in national polls and a narrower advantage in most battleground states, as the two vie for an unusually small number of voters still up for grabs.

Much, however, remains unknown, including the messy mechanics of holding an election amid a widespread deadly disease, the trajectory of the country’s economic and health crises and, possibly, the result of covert interference like Russia’s meddling in the election four years ago.

Perhaps the biggest question as the contest hurtles into its post-Labour Day phase is the degree to which the election serves as a referendum on the incumbent — a perilous thing for a president who has never enjoyed majority support — and how successful Trump can be at recasting the race as a choice between himself and Biden as the alternative.

While the temptation may be to use 2016 as a guide, the political climate is vastly different.

Trump, for one, has been in office for three and a half years and has a record he must defend. Biden, though not as unpopular as Hillary Clinton, is weighted by his own baggage, not least his age — now 77, he would be the oldest president in American history (a distinction currently held by Trump, who is 74).

“I figure there are only three things in common between 2016 and 2020,” said Charlie Cook, a nonpartisan political analyst who has spent decades handicapping elections. “Both are presidential races. Donald Trump is the Republican nominee both times. And both years begin with 20.”

Trump and Russia echo each other in presidential race

As always, the contest is not a national election but a series of discrete races that will be decided by the electoral college.

The focus now narrows to a set of battleground states that are crucial to the outcome. Republicans and Democrats agree that Wisconsin, Michigan and Pennsylvania — three states Trump barely won four years ago — are pivotal.

Also crucial will be Florida, a quadrennial swing state, and Arizona, a traditional Republican stronghold that has grown highly competitive. Surveys also suggest tight races in North Carolina, Georgia, Iowa and Ohio, all of which Trump carried in 2016.

Nearly all of the campaign is being waged on territory the president won, though Republicans have taken the offense by targeting Minnesota, a historically Democratic state that Clinton narrowly carried four years ago, and New Hampshire, which the president barely lost. Nevada, which voted Democratic the last several elections, is another state both sides are watching.

For most of his presidency, Trump oversaw a robust economy and, while it has tumbled into free fall amid the pandemic, those good times arguably remain his strongest asset. He maintains an edge, albeit a narrowing one, as the candidate voters most trust to bring about an economic recovery. That, Republican strategists say, can overcome any reservations voters may have about Trump’s brash personality and provocative personal conduct.

“People may not want to put a yard sign in their front yard, but they are rooting for someone that can get the economy moving again,” said Scott Reed, senior political strategist for the right-leaning US Chamber of Commerce. “As we come out of this pandemic and the economy comes back, folks are going to be voting their pocketbook or purse. That’s why I’m thinking this will be a fight to the finish.”

Seeking to make the election a choice, rather than a straight-up referendum, Trump has leaned forcefully into a “law and order” theme, siding with police amid the continuing protests over racial inequities and spotlighting instances of property destruction during mostly peaceful rallies as the work of radicals aligned with Biden and his fellow Democrats.

Biden has fought back by redefining safety to encompass containment of the coronavirus, providing universal healthcare and cushioning the blows of a sagging economy.

Recent polls suggest he has gotten the better of the security argument, with most voters seeing the Democrat as more suited to handling protests, reducing violence and keeping Americans safe.

There is little sign that women — in particular, the key voting bloc of college-educated suburban women — have been swayed by Trump’s crime-fighting pitch. Those voters helped deliver control of the House to Democrats in the 2018 midterm election and remain soured on the president.

“He helped instigate what we’re seeing in terms of protest and uprising and says ‘I alone can fix it,’” said Margie Omero, a Democratic pollster, who has conducted extensive research among women voters. “There’s no evidence that people are seeing it that same way.”

At the same time, some polls suggest that Trump is running stronger among Black and Latino voters than he did in 2016. Those groups are crucial to Biden’s prospects in November and are especially key in the battlegrounds of Florida, Arizona and the Upper Midwest.

“They’re going to vote for Joe Biden, because he is a remedy of what ails folks right now,” Shropshire said.

Buoying Trump is his unshakable political base, constituting 40% to 45% of the electorate, which Republicans believe has room for considerable growth. They say the president has a vast number of staunch supporters who didn’t bother turning out in 2016. “The challenge for (Trump),” said Brad Todd, a GOP strategist, “is convincing them that voting matters.”

The pandemic has upended “get out the vote” efforts by both parties. Democrats, adhering to social distancing guidelines, have turned to phone calls, texts and virtual communications to rally their partisans. The Biden campaign said it had 2.6 million conversations with voters in August alone. The GOP has continued with a traditional program of door-knocking, and strategists take heart at the excitement they sense at the campaign’s ground level.

Democrats are thrilled by Biden’s strong fundraising — the campaign netted a record-crushing $364.5 million in August — which has removed any concerns about running short of cash. Biden’s campaign is so flush that Priorities USA, a Democratic political action committee, has branched out to undertake an unprecedented voting education campaign.

Apart from the debates, many Democrats say sabotage of the election is the thing that worries them most. 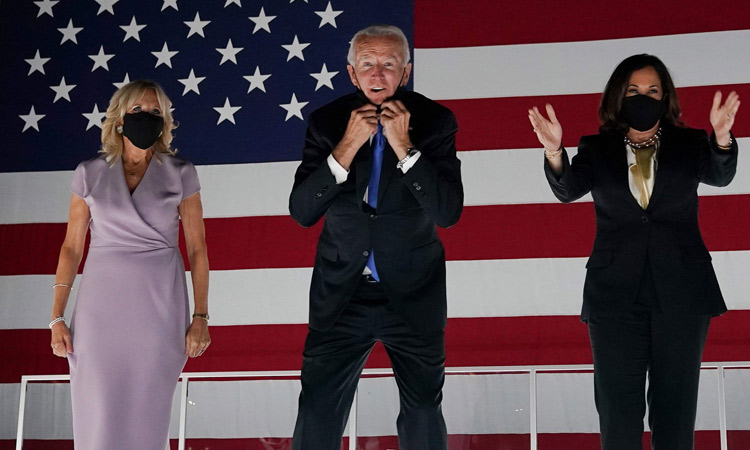