Democrats hold edge if election is too close to call - GulfToday 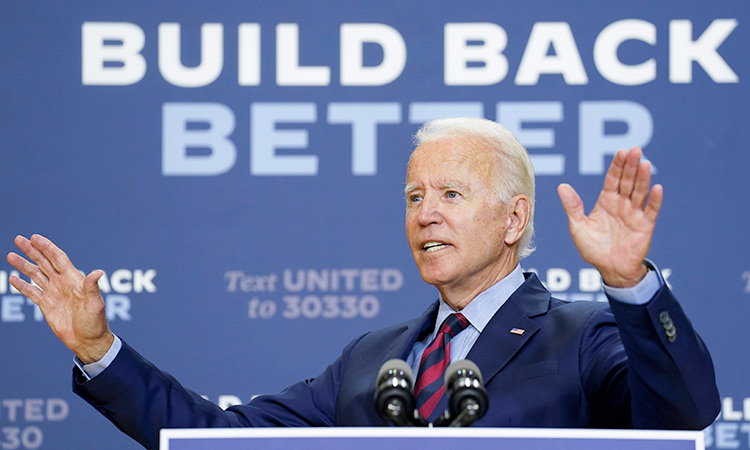 Democratic US presidential nominee Joe Biden during a speech at Wilmington, Delaware, US on Friday. Reuters

Twenty years ago, as Democrat Al Gore and Republican George W. Bush battled for weeks over which one of them had won the US presidential election, Florida’s Republican secretary of state, Katherine Harris, helped hand the White House to Bush by declaring an end to recounts that showed him clinging to the slimmest of leads.

If the outcome of this November’s election comes down to fights over counting mail-in ballots and claims of fraud by President Donald Trump, Democrat Joe Biden may have a quiet advantage: The top election officials in many of the key states that could decide the election are Democrats.

In Michigan and Pennsylvania — two Democratic-leaning states Trump won in 2016 — the top elections officials belong to Biden’s party. That’s also true in Arizona, which Trump carried but Biden is now leading in the polls, and Minnesota, which the president has targeted.

Should that happen, it will be up to the secretaries of state to preside over the counting of mail-in votes and certify the final outcomes, a process that could take days or weeks. These relatively anonymous state officials could prove a bulwark for Biden as they cope with what is expected to be an unprecedented surge in mail-in ballots because of the coronavirus pandemic.

They will also be on the front lines in countering any claims by Trump or his allies that the election is somehow rigged.

“It will be all hands on deck, but defending election results will definitely start with secretaries of state as the chief election officer,” said Alex Padilla, a Democrat who was elected to serve as California’s secretary of state. “In my mind, it’s definitely good that we have secretaries in swing states committed to strengthening and defending the voting system.”

Election officials insist that they’re nonpartisan and oversee voting according to the law. But J. Kenneth Blackwell, a former Ohio secretary of state, said it’s impossible to avoid politics when elections officials have to make tough decisions.

Blackwell was in charge of Ohio’s voting in 2004, when Democrat John Kerry delayed conceding to Bush until the morning after Election Day because of outstanding provisional ballots.

“You can’t take politics out of politics,” said Blackwell, now a member of the Trump campaign’s board of advisers. “It’s the way our system is set up. I don’t all of a sudden become a non-Republican when I have to make a judgment associated with my job in the political sphere.”

Karen Brinson Bell, the executive director of the North Carolina State Board of Elections tangled with Trump just this week. Brinson, who was appointed by a Democratic-controlled board, on Thursday warned voters that “it is illegal to vote twice in an election” after Trump encouraged people who mail in their ballots for the November election to also go to the polls on Election Day.

“These mail-in ballots are a disgrace and they know it,” Trump told supporters at a campaign rally in Pennsylvania on Thursday evening, speaking about Democrats and suggesting they could manipulate mail-in voting. “The only way they’re going to beat us is by doing that kind of stuff.”

The Democratic secretary of state in Pennsylvania, Kathy Boockvar, said in a statement that she has confidence county elections officials will count ballots as efficiently as possible to make sure “the outcome of the election is known as quickly as possible.”

While state officials influence the election with the rules governing voting, they also can play a pivotal role in ballot-counting if the race is close with rulings to break tie votes or other actions such as Harris took in 2000, said Daniel Tokaji, a former Ohio State University election law professor and now dean of the University of Wisconsin Law School. There’s also inherent tension between discharging their official duties and the incentive to help their party, he said.

“There’s just no getting around that conflict of interest,” Tokaji added. “Even well-intentioned officials trying to do the right thing, their actions can always be called into question.”

But Charles Stewart III, a professor and elections scholar at the Massachusetts Institute of Technology, said if the race does go into overtime, the courts likely would play the more decisive role. He cited changes made to ballot-counting processes after the Florida 2000 recount chaos that gave secretaries of state less discretion.

Asked whether Trump’s campaign is concerned about Democrats being in charge of overseeing post-election counting, spokeswoman Thea McDonald focused instead on efforts to expand mail-in voting. “Rather than trying to predict the future, the news media ought to draw attention to Democrats’ nonstop attempts to throw our electoral system into chaos 60 days before a general election,” she said.

Election officials say that while television networks and news wires typically declare winners on Election Night, that’s based on an unofficial vote that doesn’t become official until days or weeks later — after outstanding ballots are counted and there’s a canvass to determine final tallies with any recounts. The inability to declare an unofficial winner on Election Night is not a sign of problems, they say.

But the possibility of delayed unofficial election results this year is real, said Maria Benson, spokeswoman for the National Association of Secretaries of State, and “we ask all voters and the media to be patient.”

Current laws in states including Michigan, Pennsylvania and Wisconsin don’t allow mail-ballots to be processed until Election Day, meaning they may not all be counted by the end of the night, and other states, including Ohio, allow ballots received after the election to be counted as long as they are postmarked earlier. First-time voters and those going to the wrong polling place will lead to more provisional ballots, which are held until voter eligibility is determined after the election, pointed out Michael Morley, an assistant law professor at Florida State University who has worked on election emergencies and post-election litigation.

Washington’s Republican secretary of state, Kim Wyman, said her colleagues should be prepared to manage a legal crisis that could determine the outcome of the 2020 presidential election.

“This will have shades of 20 years ago during Bush v. Gore,” said Wyman, who is running for re-election in November. “I hope my colleagues and I will be able to present the facts to voters in our own states and the facts will prevail. That has been a challenge in 2020.”