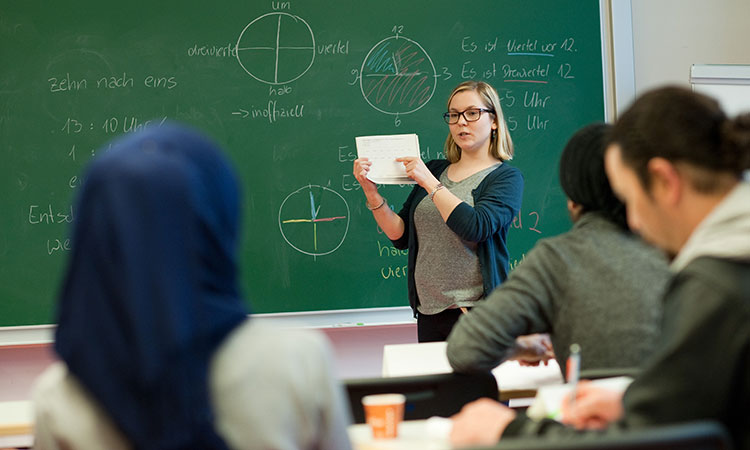 Claudia Hubatsch (centre) teaches German to a group of refugees at the University of Potsdam, Potsdam, Germany. File/Associated Press

Fifteen years ago I flew to Munich en route to Bavaria where I was invited to visit friends from Damascus who had made the torturous journey from Syria to Germany some months earlier. I had known Jamil, his mother Leila, and sisters Lora and Carla for several years. During this time I met them in the three homes they occupied in Damascus.

The first was their own pleasant flat in the Yarmouk quarter, the second a grand flat across from the Italian hospital in the centre of the “new” city where they took temporary refuge after Yarmouk fell to Daesh, and the third rooms in a bijou hotel in the Old City where displaced families were accommodated.

Leila decided they should make the journey during the summer of 2014.

As Palestinians they hoped to shed statelessness by securing German nationality.

Sitting in the pleasant sitting-dining room of their two bedroom flat in a picturesque Bavarian village, Jamil and Carla told me their story. Leila and Lora were in Holland visiting Leila’s parents who had settled there years earlier.

They hired a fixer/smuggler who drove them north to the Turkish border through Syrian army and Daesh checkpoints, through villages held by Daesh where severed heads were displayed on posts by the roadside. While Jamil fretted because he was wearing jeans condemned by Daesh, his mother and sisters were enveloped in chadors, their faces concealed by two-ply veils.

During their first attempt to cross the Turkish border they were seen off by a Turkish border guard who thrust his rifle into Jamil’s chest; but they managed on the second try, and took a bus to Istanbul. From there they toured coastal cities in search of a passage on a rubber raft bound for a nearby Greek island. After three perilous tries they reached the island where they were sheltered in an uncomfortable barrack before taking a ferry to Athens.

It took them three months to arrange their journey to Germany. They went to Italy on another ferry and travelled north to the German border where they crossed easily but were arrested by the police because they were riding in a van with Bulgarian licence plates — Bulgarians being involved in the smuggling business.

After stays in a refugee camp and a flat shared with Slav refugees and too few beds, they moved to the comfortable flat where I finally found them.

They are now settled in Berlin where Jamil earned his MA and has a job, Lora and Carla are at universities and Leila is learning German.

The reason I am telling their story is that they are examples of the success of the gamble German Chancellor Angela Merkel took when she welcomed nearly a million refugees and migrants during 2014-15. She declared, “We will manage this.”

And, Germany has managed in spite of the difficulties of absorbing a Babel of non-German speakers, providing them with homes, health care, education, and jobs. Katarina Nieweidzial, a German integration officer of Polish extraction, told The Guardian, “It’s a success story even if no one quite had the confidence to say it…”

Most arrivals were men fleeing the civil and proxy war in Syria. But, there were also Iraqis and Afghans, seeking to escape conflicts inflicted by Western intervention on their home countries as well as economic migrants claiming to be Syrians. I was in Munich railway station on the day tens of thousands, the largest number ever, exited trains from Austria and were guided across the station platform by unarmed German policemen. In a group of several hundred young men were two women, one pushing a child in a carriage. Their luggage consisted of backpacks and plastic bags. They came with nothing but expectations.

Hungary and Austria did not welcome refugees and those who stayed there did not prosper. European Union members were asked to share out the refugees according to quotas but refused. In March 2016, Europe reached a deal with Turkey to return refugees and migrants seeking to reach Greece by setting sail across the Aegean sea. This has dramatically cut the number of asylum seekers but has given Turkish President Recep Tayyip Erdogan leverage over the European Union which has made only a token effort to counter his expansionist policies in the Eastern Mediterranean, Syria, and Libya.

Today Italy and Malta are chafing under the strain of the constant flow to their shores of migrants, most from Sub-Saharan Africa, while Greece, which still hosts thousands of Syrians, is sending back to Turkey boats loaded with refugees and migrants. Turkey has weaponised refugees to promote its demands in the Levant.

The only way to solve the refugee/migrant problem is to adopt policies which encourage and enable people stay at home, particularly in this region.

Syria is the perfect example where this would make a major difference. Syrians will remain and many will even return home if the West, particularly the US, lifts sanctions on the country to permit the normal flow of trade and enable Syria to secure materials and investment for reconstruction. Turkey has to be forced to tackle Hay’at Tahrir al-Sham, its allies and Daesh in the northwester province of Idlib and to pull out of areas it occupies along the border. The Kurds in the northeast must be pressed east to reconcile with Damascus. The Western game of divide and rule in Syria has to stop if the flow of asylum seekers is to cease.

Iraq needs help to curb the influence of the pro-Iranian Shia politicians and militias which dominate the political scene and prevent displaced Sunnis from returning to their ancestral towns and villages, prompting many to flee the country. A non-sectarian system of governance needs to be installed, corruption curbed, and reconstruction of destroyed infrastructure, cities, towns and villages has to be carried out. The young who have been protesting their rulers’ mismanagement and corruption for nearly a year must have reasons to stay at home.

Tens of thousands of Lebanese could emigrate to Europe, the US, Latin America and elsewhere if that country remains in the grip of the current corrupt political class, the economic situation continues to deteriorate, and the country’s deficient electricity and water, and public services are not improved.

Reviving trade among these three countries, cut off from one another by war and sanctions, would boost their economies and provide jobs for millions of unemployed.

Halting emigration from the Levant and Iraq is not rocket science but involves adopting and implementing logical measures. Sub-Saharan Africa is a far more complex problem that requires major political transformation while Afghanistan will remain conflicted as long as the Taliban remains a power in the land. Donald Trump’s peace with the Taliban could produce a mass wave of refugees who do not want to live under coercive ultra-conservative rule.