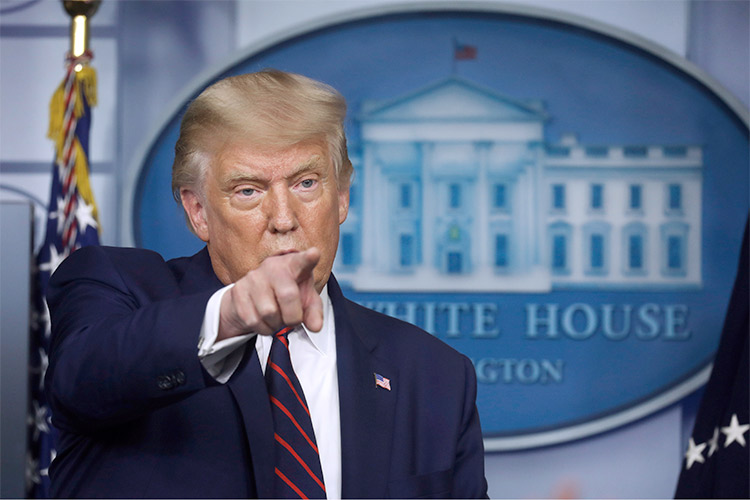 US President Donald Trump during a news conference at the White House in Washington on Friday. Reuters

Spurred on by yet more protests in the wake of yet another police shooting of a Black man — some of which have turned into riots — Trump has pushed to recast his flagging re-election campaign in the mould used by many a Republican campaign since the days of the anti-war and civil rights movements in the late 20th century. As did Richard Nixon and George Wallace before him, he has leaned heavily on the rhetorical trope of “law and order” as he’s railed against the supposed lawlessness of America’s more liberal and racially diverse cities. In doing so, he has pushed to rally the far more monochromatic masses of the suburbs, exurbs, and rural areas of the country.

It’s a frame as old as the country itself, pitting the cosmopolitan urban masses against the “silent majority” of “real America.” But Trump has taken this familiar populist refrain in a darker direction by weaponising the funding mechanisms of the federal government against other Americans.

In a presidential memorandum released Wednesday evening, Trump called on the White House budget director to present him with a report on all federal funds which flow to four cities that have become bêtes noires to him and the millions who regularly inhale an exclusive diet of conservative media: Seattle (where a group of Black Lives Matter protesters took over a few city blocks for a short time this summer); Portland (where far-right militias have clashed with self-described antifascists); Washington (where Mayor Muriel Bowser renamed a stretch of road leading to the White House “Black Lives Matter Plaza”); and New York City (where Mayor Bill de Blasio ordered “Black Lives Matter” painted in front of the President’s eponymous skyscraper).

In the same memorandum, the President also ordered Attorney General William Barr to identify so-called “anarchist jurisdictions” — a designation to be determined by whether a given city fails to endlessly increase police budgets, does not respond to Trump’s demand to allow federal law enforcement to roam freely and use force against protesters, or “any other related factors the Attorney General deems appropriate,” all with an eye towards cutting off federal funds to those city governments (or, as Trump himself might put it, defunding their police).

Using federal funds as a cudgel is nothing new for Trump. Just days into his presidency, he signed an order (which would be overturned by the courts) denying federal funds to so-called “sanctuary cities,” and he was impeached by the House of Representatives not one year ago for trying to withhold approximately $390 million in funds meant for Ukraine in order to force that country’s president to announce sham investigations into Joe Biden and his son, Hunter Biden. More recently, Trump’s anti-urbanist attitude manifested in his administration’s early non-response to the COVID-19 pandemic, particularly in mid-April when he stepped on his own guidelines to “slow the spread” by calling on his (often gun-toting) supporters to “LIBERATE” a trio of states from lockdown orders imposed by their Democratic governors.

But while Trump has always viewed the “blue” states and cities where Americans rejected him in 2016 as less than worthy of federal support, even those familiar with such populist refrains say this latest executive action — combined with his now familiar rhetorical broadsides against “Democrat-run” jurisdictions — indicates a darker turn.

Ruth Ben-Ghiat, a New York University history professor who studies authoritarian leaders, said Trump’s threat to defund American cities is partly “classic Trump,” but now with Americans — rather than illegal immigrants — as the faceless “enemy” to be feared.

“Earlier in his presidency, the targets were illegal migrants and then occasionally…terrorists… but after Lafyette Square and this kind of military occupation in DC, he’s made it clear that… American protesters… are the terrorists and domestic enemies,” she explained.

Ben-Ghiat, the author of the forthcoming book Strongmen: How They Rise, Why They Succeed, How They Fall, said Trump is undoubtedly aware that based on his previous failure to defund cities that don’t cooperate with his immigration enforcement priorities, this latest action is “unlikely to gain legal traction”.

“But that’s not the point of it,” she continued. “The point is, it’s a show for his base. It’s intimidation for everybody else. But it’s also a real expression of how he wants to dominate in a way that is completely out of the American presidential tradition. He’s not there to govern in any kind of traditional sense. He’s there to seize absolute power, silence any critics, plunder the economy, and do all of these other things that are part of the authoritarian playbook, so we are the enemy now — anyone who resists him, who criticizes him is the enemy.”

Ex-Republican Representative Joe Walsh, the Illinois Tea Party firebrand-turned-Trump critic, said the President’s focus on cities and states run by Democrats was emblematic of a re-election strategy that requires him to portray such places as necessitating the same treatment that China has recently given Hong Kong — that of a rogue province populated by enemies who must be brought to heel.

“Trump’s got only one path to victory. It’s to scare the f**k out of white people, to divide, and to get his base revved up,” he said.

Walsh recalled times when, in the heat of the Tea Party movement that sent him and many other populist-minded Republicans to Congress, he would lament how different the values of people in cities like San Francisco were from those living in places like Kansas.

“But Trump… reached into the Tea Party basket, and he grabbed the ugliest elements of it, and he demagogued them, and he personified them, almost… So now for the average (former) Tea Party (voter), that’s what they lead with now: Not only are Red and Blue America divided, but Blue America shouldn’t even be a part of America anymore and we ought to take money away from them,” he explained.

“It’s a cult now, and they will now just go along with everything and anything he does, as long as it’s hurting the people they think should be hurt. I couldn’t tell you if the average Trump supporter out there believes that they (people in cities) need to be brought to heel, but Donald says that they need to be, so they’re fully on board with it.”