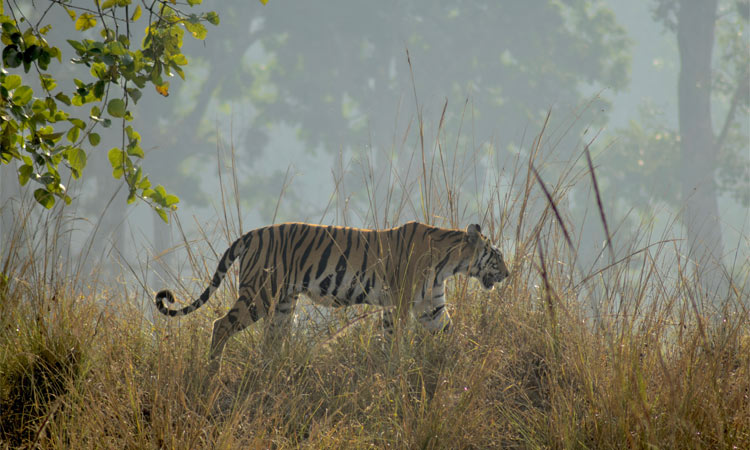 One of the world’s ten worst invasive species and a species of high concern for India, Lantana camara, a tropical American shrub, has invaded more than 40% of India’s tiger range. The Shivalik hills, Central India, and Southern Western Ghats are the worst hit.

These are the findings of a recent study by researchers from the Wildlife Institute of India published in Global Ecology and Conservation. Previous studies found multiple species and varieties of Lantana introduced during the 1800s across the tropics where it was introduced as hedge plants and were subsequently hybridized for improved stand and other ornamental properties. Researchers say this has added to the number of varieties, which were later reported to invade native forests.

Loss of biodiversity due to the presence of invasive species and fragmentation is of great concern and can lead to unhealthy ecosystems and ecosystem disservices. The study also mentions that controlling lantana in one sq.km costs Rs 1.4 million and with the current expanse it would need 10 billion dollars more than the total funds allocated to the Ministry of Environment, Forest and Climate Change in 2019!

An exotic plant with pretty flowers, Lantana now occupies 40% of India’s tiger range alone. As the study points out, multiple hybrid varieties of lantana were brought to India and over the 200 years of its introduction, the varieties have hybridized and formed a complex. The species is now able to climb up the canopy as a woody vine, entangle other plants by forming a dense thicket, and spread on the forest floor as a scrambling shrub.

The study has analyzed data from one of the most extensive known systematic surveys done for evaluating the status of invasive plants at multi-landscape scale. These surveys were part of the National Tiger Estimation Project. They were conducted both inside and outside of protected areas in India by the forest guards of respective State Forest Departments and a team of wildlife biologists.

This research shows that forests degraded due to human influence and those occurring in warm and humid regions are most affected. Also the Lantana in India is growing in climatic conditions quite different from its native climate in Central America. Madhya Pradesh, which has the highest reported forest cover in India, was found to have a substantial part of its forests invaded. Likewise, Bandipur Tiger Reserve, which was shown to be ‘greening’ by another study, was found to be substantially invaded by lantana.

The study also identified uninvaded forests to be present in northeastern India, and in parts of Odisha, Chhattisgarh, Jharkhand and Maharashtra. However, most of these forests have been earmarked for developmental projects (like dams, coal mining, etc.).

A Mongabay-India report points out that this monstrous spread is mainly by fruit-eating birds, monkeys, bears, etc. But Lantana also has a capability to grow from its root-stock and nodes (via vegetative propagation). In every Tiger Reserve, a few hectares of land is cleared of lantana each year, but the area requires intensive surveillance. Since lantana seeds are already present in soil and they are also dispersed by many birds from surrounding areas, lantana regrows rapidly. To tackle this, a follow-up removal of lantana seedlings is necessary for a minimum of two years. The report adds that this is a mammoth task and results have not yielded much.

With this large invaded range, Lantana is probably the most widely distributed invasive plant in India, as compared to other invasive plants. The study results highlight the role of forest degradation and climate change in elevating the global risk of biological invasions, and the importance of large-scale ecological monitoring for a better understanding of invasions that can potentially guide management actions.

The authors of the study warn that Lantana has invaded around 75 countries and poses a serious threat to their native biodiversity. As compared to previous global projections, the study shows that Lantana could potentially invade novel climatic regions in India, Myanmar, Thailand, Philippines, Pakistan, Northern Australia, Madagascar, Mozambique, Malawi, Ethiopia and parts of Oceania. Future invasions in other countries should be monitored too in order to arrest the invasion in its initial phase. It is also possible that Lantana has already invaded many potential areas which have not yet been sampled for occurrence. The studies models highlight such areas across the world which should be sampled on priority.