Syrian crisis: ‘A choice between bread and masks’ - GulfToday 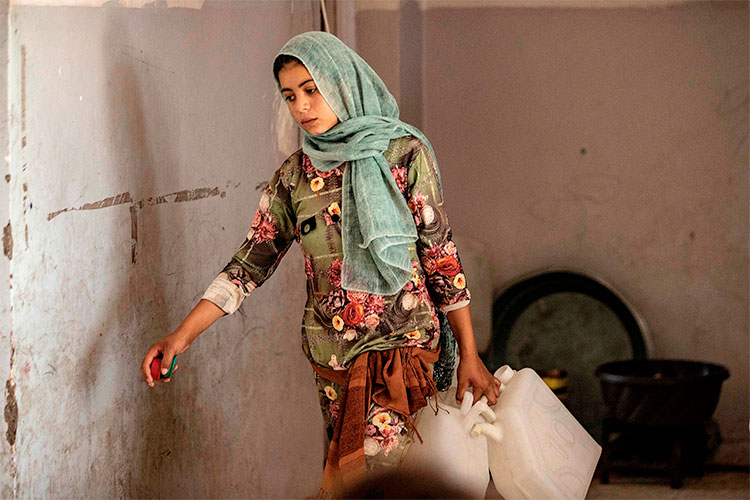 A girl carries jerry cans to fill them with water inside a school building in Hasakeh, where Syrians displaced from Ras Al-Ain, are staying. Agence France-Presse

Millions of ordinary Syrians are having to choose between buying food to eat and taking precautionary measures against coronavirus, which local witnesses say is much more widespread than the Syrian government admits.

Poverty and deprivation have worsened dramatically since the US introduced all-embracing sanctions on Syria on 17 June under the Caesar Syria Civilian Protection Act, which Donald Trump signed into law late last year. Named after the individual who documented the murder of thousands of Syrians by the Syrian government (Syrian officials deny the allegations), the legislation is supposedly intended to restrain it from carrying out further acts of repression.

In practice the Caesar Act does little to weaken President Bashar al-Assad and his regime, but it does impose a devastating economic siege on a country where civilians are already ground down by nine years of war and economic embargo. The eight in 10 Syrians who are listed by the UN as falling below the poverty line must now cope with a sudden upsurge in the coronavirus pandemic.

As with UN sanctions imposed on Saddam Hussein’s Iraq in the 1990s, the Syrian leadership will be least affected by the new American measures because it controls resources. The real victims are the poor and the powerless who suffer since the price of foodstuffs has risen by 209 per cent in the last year. The cost of a basic food basket is 23.5 times what it was before the start of the Syrian crisis in 2011 according to the World Food Programme (WFP).

Beneath a hypocritical pretence that it is helping ordinary people, the Trump administration is stoking a humanitarian catastrophe in a bid to deny a victory to Russia and Iran, the two main supporters of Assad during the conflict. Confirming this aim, the US special representative for Syria James Jeffrey says that US policy is to turn Syria into “a quagmire” for Russia, like the one the US faced in Vietnam, and to give the US a degree of control over Syria similar to what it had in Japan at the end of the Second World War.

Such aims are dangerously unrealistic as Assad, Russia and Iran have already won the war militarily, but US wishful thinking does have the potential to further devastate the lives of millions of Syrians. Detailed and reliable information has been lacking about how they are surviving, or failing to survive, as the Caesar Act is implanted and the virus spreads. Access to Syria by journalists is limited and news from Syria, however dire, has largely dropped out of the international news agenda because everybody is preoccupied with the progress of the pandemic in their own countries.

A nurse at one of the largest hospitals in Damascus has given The Independent a detailed account of how coronavirus and the Caesar Act are combining to bring fresh disasters to Syria, a country already ruined by nine years of war. Muhanad Shami (which is not his real name) is 28 years old and works in the giant al-Mouwasat University Hospital in Damascus. He speaks graphically and convincingly of the worsening crisis in the Syrian capital and in his own hospital as the virus spreads amid crippling shortages and soaring prices.

“It’s an atmosphere of fear and panic in the hospital,” says Muhanad. “Every day hundreds of sick people come here, most of them suffering from coronavirus symptoms, but the hospital is already full.” Its buildings hold more than a thousand patients, many of them sleeping on mattresses on the floor.

He says that the official numbers of infections announced by the Syrian authorities may be only about 10 per cent of the real figure: “On Friday 14 August, the ministry of health announced only 72 cases in Syria, but in my hospital alone there were about 200 people crowded into the yard nearby and all of them were sick, coughing, with a high temperature, a need for oxygen, and no feeling of taste and smell.” The hospital management only had enough equipment to test three people who all tested positive.

The swift rise in the number infected is scarcely surprising, given that, until recently, the government played down the threat from coronavirus, leading people to take few precautions to avoid catching it. Muhanad says: “Every day, I go to work in a bus or minibus which should carry eleven people, but is mostly crowded with 15 people and I am the only one who wears a mask.” He normally gets a mask and disinfectant from his hospital but, when these are not available, he walks 45 minutes from his flat to the hospital rather than risk being crammed into a bus.

“I am surprised I am not sick so far,” he says. “Maybe it is because I am walking to work most days and sweating and that makes me more immune.” Three doctors and several nurses, two of whom he knew, have died at the hospital, where there is a shortage of masks. “I just wash my hands and drink water every 10 minutes. I spend the day in a state of anxiety.”

Private hospitals are also full up and oxygen cylinders and ventilators often have to be purchased privately. Muhanad says that his “aunt has four children and the whole family are sick with coronavirus, so our relatives living in the United Arab Emirates sent her some money to buy equipment.” She spent about $450 (£345) on medicine, ventilators and oxygen cylinders, but then faced the problem that there is no continuous supply of electricity in Damascus to keep equipment like a ventilator running all the time.

The pandemic strikes at a population already weakened during nine years of war and sanctions – already stringent and economically destructive before the Caesar Act provoked a collapse in the Syrian currency this summer. Muhanad blames the government for pretending that coronavirus was less widespread than it really was, leading people to crowd together without masks in the markets. He sees the Caesar Act plunging an impoverished people deeper into misery.

The number of Syrians who are food insecure has risen in the last six months by 1.4 million to 9.3 million, more than half the population, according to the WFP. The Caesar Act and coronavirus do not appear to be weakening Assad, Russia and Iran, but there is every sign they are together plunging ordinary Syrians into a deep and lethal quagmire. 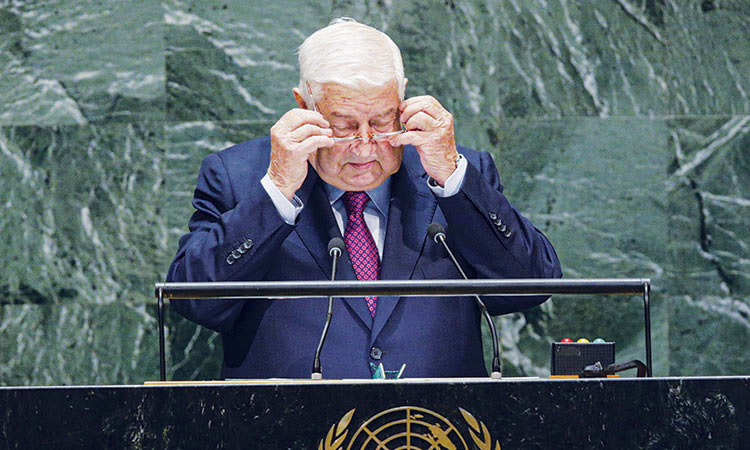