A feat that deserves celebration - GulfToday 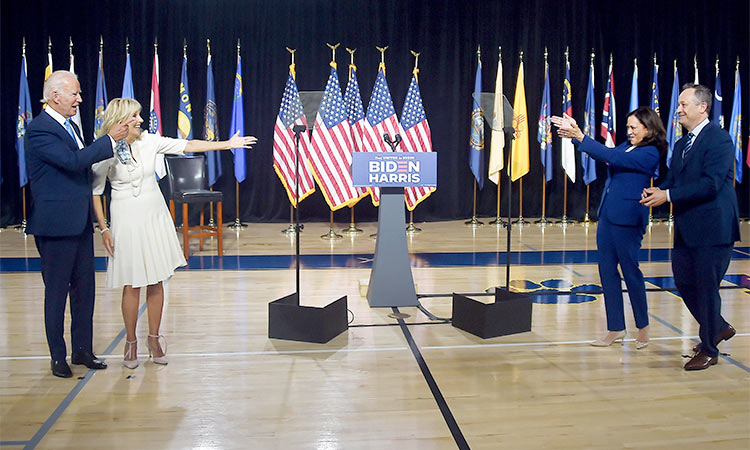 Democratic presidential nominee and former US Vice President Joe Biden and his wife Jill Biden (left) wave to his vice presidential running mate, US Senator Kamala Harris, and her husband Douglas Emhoff (right) after their first press conference together in Wilmington, Delaware, on Wednesday. Agence France-Presse

We’re always ahead of the curve, right? At least that’s what we tell ourselves. In this instance, we clearly are — a historic feat that deserves celebration by all Americans, regardless of their politics.

We shouldn’t pat ourselves on the backs too enthusiastically, however. California, by far the nation’s most populous state, still has not elected a female governor. Many other states have. Neither have we elected a governor of colour.

This is also a state of immigrants. And fittingly, Sen. Kamala Harris is the daughter of immigrant parents — a father from Jamaica, a mother from India. Harris is not only the first Black woman, but also the first Asian American person to be given a spot on a major presidential ticket.

According to the US Census Bureau, California’s population is 39% Latino, 37% white, 15% Asian, 6% Black, 3% multiracial — like Harris — and fewer than 1% Native American or Pacific Islander.

Her verbal fighting skills — in a debate, on the stump or in TV interviews — were obviously a key selling point to presumptive Democratic nominee Joe Biden. She’s very capable of drawing blood from an opponent. Biden doesn’t have to worry about Harris slacking off on the campaign trail — as some presidential candidates have had to in the past. She’s an eager brawler.

“Joe has long been impressed by how tough Kamala is,” the Biden campaign stated in announcing the selection of Harris.

It added: “Kamala doesn’t hesitate to take on powerful people and powerful interests and that’s exactly the kind of leader Joe wants by his side to rebuild this country and restore the soul of the nation.”

Well, that’s a reach — that part about taking on powerful people and interests.

Critics of Harris’ performances as California attorney general and San Francisco district attorney have cited her caution in taking on tough foes, especially if it would alienate her core constituency: law enforcement.

Harris also declined to take positions on controversial ballot measures, including two to abolish the death penalty — a practice she claimed to abhor — and another to reduce prison sentences.

As a presidential candidate, Harris wavered on the hot issue of universal health care, flip-flopping on whether private insurance should play a role. But none of that will matter this fall, except as attack fodder for Trump.

There’ll be no agonising by Harris over policy positions. Like all veep candidates — Biden included under Barack Obama — Harris’ positions will be decided by the presidential nominee.

Harris’ strength is in her prosecutorial skills, not her policy wisdom or tactical genius. And that’s what Biden is counting on.

Another huge selling point for Harris, 55, was Biden’s expected comfort level with her. That’s because of her close working relationship with Biden’s son, Beau, when both were state attorneys general.

“Back when Kamala was attorney general, she worked closely with Beau,” Biden tweeted supporters Tuesday. “I watched as they took on the big banks, lifted up working people and protected women and kids from abuse. I was proud then and I’m proud now to have her as my partner in this campaign.”

It seems Biden watched his son a lot more than Harris.

This was by far Biden’s most important campaign decision and he deserves credit for following his gut. But we need to wait and see how this turns out — and whether Harris turns off suburban Republican women in key battleground states such as Wisconsin, Michigan and Pennsylvania.

Is Harris an asset, who will energise young people and women of color to vote in droves — or did Biden violate the Hippocratic oath about first doing no harm? We won’t know until November.

Some insiders had warned Biden that Harris seemed too “ambitious” and could be disloyal. This was largely based on Harris’ attack against Biden on busing in an early debate.

But Biden made a point of showing he doesn’t hold a grudge.

She wasn’t as experienced a campaigner as Harris. She hadn’t even run a statewide campaign, let alone one nationally. Plus, she and Biden weren’t particularly close. She didn’t come across as a fighter. And she praised Cuban leader Fidel Castro when he died, which could have cost Biden any chance of carrying Florida.

But Bass, who is Black, is a classy, nonpolarising career-long fighter for civil rights. She chairs the Congressional Black Caucus and was Speaker of the California State Assembly. She’s a likable liberal who can deal with conservative Republicans.

Based on polls, the Biden-Harris ticket should win on Nov. 3. That will open up a Senate vacancy that Gov. Gavin Newsom legally can fill on his own — unfortunately — without a vote of the people.

One bit of trivia: Harris will be the first major vice presidential candidate from California since Richard Nixon in the 1950s. Hopefully that’s an irrelevant asterisk.

Harris’ selection is proof we’ve all grown a lot since then.

On the one hand, Joe Biden — who is running as the candidate who promises to make the presidency boring again — made the most obvious — that is, boring — selection for his running mate on the Democratic ticket.

California’s Kamala Harris was the logical choice all along — a nationally known senator from a big state who had run for president and acquitted herself well, even though she dropped out early. That speaks well of Biden. Logical selections are the ones that have performed well over time.

On the other hand? The fact that Harris — who is Black and South Asian — was the safe choice based on normal criteria is, let’s not forget, astonishing. She’s only the second Black woman in the Senate (after Carol Moseley Braun) and the first ever female senator of South Asian ancestry.

Yet she fits all the things that the Democratic Party in 2020 would look for in a running mate for Joe Biden. Unlike Geraldine Ferraro in 1984 and Sarah Palin in 2008, Harris is already a national figure.