A tragedy that crashed the hopes of distressed - GulfToday 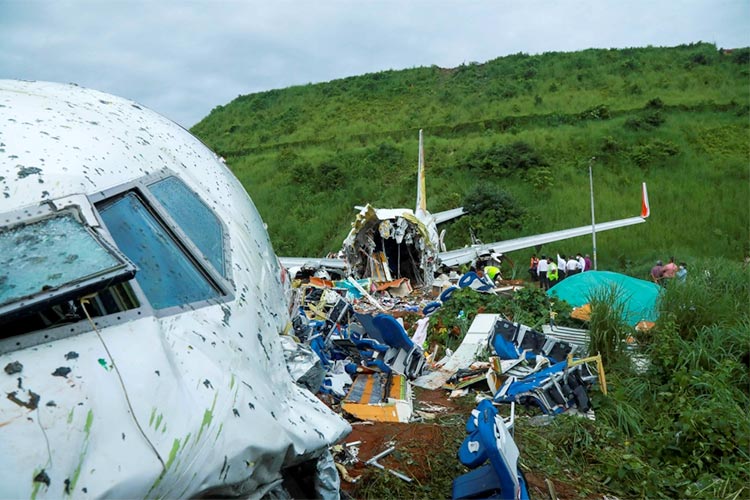 Officials inspect the damage of an Air India Express jet at Calicut International Airport in Karipur on Saturday. Agence France-Presse

The incident in which an Air India Express plane overshot the runway amid heavy rain and broke into two after landing in the southern city of Calicut claiming several lives, including two pilots, and injuring many is tragic and extremely painful.

What adds to the sorrow is that the victims were already going through a tough time because of the global pandemic situation and international travel involves much more formalities than in normal times. Millions of Indians work in the Gulf.

The Boeing-737 flight was flying home Indians stranded overseas due to the coronavirus pandemic. Among the passengers were 10 infants.

The airport, built on top of a hill with restricted space at the end of the runway, is one of Kerala’s most prominent international terminals. Kozhikode’s 2,850-meter runway is on a flat hilltop with deep gorges on either side. The tabletop runway presents pilots a huge challenge when landing.

Captain Deepak Sathe, the pilot who died in the plane crash, had also served in the IAF’s ‘Golden Arrows’ squadron which received Rafale fighters.

One consolation could come from the fact that the plane did not catch fire after skidding off the runway.

As per Civil Aviation Minister Hardeep Singh Puri, the authorities managed to rescue most of the passengers because the plane did not catch fire while descending the slope at the end of the table-top runway.   Because of the weather conditions, the pilot could not land the first time, so he did a turnaround and tried to approach it from a different direction, Hardeep Singh Puri told national broadcaster DD News.

Media reports suggested that the plane skidded off the runway, crashing nose-first into the ground. Local TV news channels also showed passengers, some of them lying motionless on stretchers, brought into a hospital surrounded by health workers wearing masks because of the COVID-19 pandemic.

Reports that Aviation regulator DGCA had issued a show-cause notice to the director of the Kozhikode airport on July 11 last year after it found “various critical safety lapses” raises questions about what remedial actions were initiated to prevent such tragedies.

The DGCA is said to have pointed to cracks on the runway, water stagnation and excessive rubber deposits among other lapses in its notice.

“Pained by the plane accident in Kozhikode” Prime Minister Narendra Modi tweeted referring to Calicut’s new name. “My thoughts are with those who lost their loved ones. May the injured recover at the earliest.”

It may be recalled that in 2010, another Air India Express flight crashed at Karnataka’s Mangaluru International Airport in similar circumstances, killing 158 people.

That flight too had overshot the runway and plunged down the cliff into a wooded valley. An investigation found that the captain had misjudged the height while landing.

India, which shut down all air travel in late March to try to contain the novel coronavirus, has restarted limited international air travel.

The plane tragedy compounded the Indian state’s distress, as earlier on Friday dozens of people were feared dead in Idukki district after monsoon-season floods triggered a landslide.

Now that the black box — or flight data recorders — of the Boeing-737 flight have been found, important details about the reason for the deadly crash may emerge.

A thorough investigation should be launched and all corrective measures should be initiated so as to avert such tragedies in future.