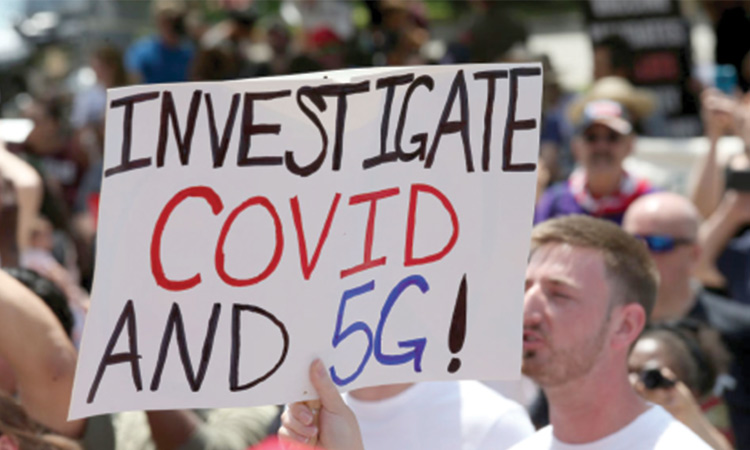 One conspiracy theory about Covid-19 widely believed in Britain is that 5G mobile technology is the cause of the disease.

Corona conspiracy theories abound the world over as people struggle to internalise the so far little understood and uncontrolled pandemic that is infecting millions of people and killing hundreds of thousands. As the leading global promoter of these theories Donald Trump seeks to divert attention from his miserable management of Covid-19 since its rise in the US six months ago.

He has seized on disproven theories on the origin of the virus. Among these are that it comes from bat soup or a leak from a Chinese laboratory either researching the disease or producing bio-weapons. Trump ordered US intelligence agencies to find proof of a Chinese leak although they had reported its appearance was “natural.” He has dubbed Covid-19 the “China virus” with the aim of blaming its emergence on Beijing in order to avoid responsibility for failing to contain it when it reached the US in February. China retorted that the virus had escaped from a Fort Detrick bio-defence lab which had been closed down by the US Centre for Disease Control and Prevention due to a lack of security.

False claims also have proliferated and when combined constitute real conspiracies which harm potential victims. For example, Trump and other deniers have argued Covid-19 is just a little flu which does not infect children and from which those infected recover quickly. This is a lie. Covid is a very intrusive disease which can linger for months and target multiple organs in the human body, causing heart attacks and strokes, mental incapacity, and create long term disabilities. Covid deniers maim and kill victims, including children.

Trump is not the only conspirator on the covid front. Iran declared that the virus had originated in Israel, Indian Muslims were accused by the government of spreading the virus, and Cameroon put forward the theory that polio vaccinations infected children with covid.

Virtually every government has been accused of understating the numbers of infections and death. A leading Swedish expert argued that communities would develop “herd immunity” if they were not subjected to lockdown and masking. Swedes believed him and suffered more than 80,000 cases and nearly 6,000 deaths, far more than Sweden’s Scandinavian neighbours. Racists have said that Black and Brown ethnicities are more susceptible than whites without mentioning that many people of colour have jobs on the front line against covid and live in extended families.

Researchers have found that there is a likely link between corona misinformation and increased infection and death. The latest dangerous video Trump has re-tweeted has been put forward by Texan doctor and preacher Cameroon-born Stella Immanuel who claims that hydroxychloroquine is a “cure for covid.” Although scientists who tested the anti-malarial drug on covid patients have proved otherwise, Trump continues to insist on its efficacy. Trump admitted, in typical fashion, he knows “nothing about her.” Maybe he should have investigated. She has also claimed that dreams of demons and witches cause human ailments and alien DNA is being used in modern medicine.

Simone Gold, a Californian doctor who appeared in the video, claims that “lockdowns will kill more people than the coronavirus.” This has been proven to be dangerously wrong by countries and US states which have eased lockdown too early and suffered unremitting covid surges. Star of stage and screen Madonna regards Immanuel as “her hero” and shared a video of the woman claiming that a vaccine for Covid-19 “has been available for months.” Instead of immunising the public, Immanuel said the people in charge “would rather let fear control the people and let the rich get richer and the poor get poorer.”

Madonna’s social media posts of Immanuel have convinced some people as far from Texas as Cyprus that this is the case. Fortunately, the government here has enforced strict lockdown for more than six weeks and has now made mask wearing mandatory indoors in public places and outdoors where distancing is not possible.

According to Katherine Schaeffer writing on the website of the authoritative Pew Research Centre, 48 per cent of US citizens with secondary school education believe the online conspiracy theory that Covid-19 was intentionally spread by powerful people and 25 per cent of US adults believe there is “at least some truth in it.”

Researchers at Kings College, London, have reported that people who rely on social media and Facebook for news are inclined to believe covid conspiracy theories. One theory widely believed in Britain is that 5G mobile technology is the cause of the disease. This has prompted attacks on 5G telecom towers across that country. Another risky theory promoted on Facebook is that the disease does not exist, leading people to refuse measures to control covid. Doctors fear that once a vaccine is available, anti-vaxers — people who oppose vaccinations — will argue on social media against immunisation.

While Facebook and other online media claim they have removed hundreds of thousands of videos propagating misinformation or outright lies about covid and put warnings on others, this has not stemmed the flow of “false news.” Newspapers and television channels also propagate covid conspiracy theories around the world.

James Murdoch, son of the Australian media mogul Rupert Murdoch, has resigned his position on the board of News Corp, due to its uncritical rightist slant, support for Trump, and denial of climate change. News Corp owns, inter alia, 150 local newspapers in Australia; nine cable television channels in Asia; 39 per cent of British Sky Broadcasting and the best-selling News of the World in the UK; the influential Wall Street Journal, the New York Post, the National Geographic channels, and Fox news, Trump’s main source for information, in the US.

Authors of conspiracy theories understand that people are confused and frightened by the virus, an unseen, ill-defined enemy which is constantly mutating. Since scientists have not concluded their investigation of this “novel” or new virus, they have not been able to provide people with a full, easily understood picture of covid. Consequently, many people cleave to outlandish and farfetched ideas to provide explanations for Covid-19’s existence and depredations.

Though there are a lot of deplorable decisions by President Trump, pulling out of WHO isn’t one of them. In fact, the allegations he makes about WHO are perfectly sound. The WHO is severely compromised and had it taken a tough stand against China and with the outbreak of the virus, the disaster could be controlled.