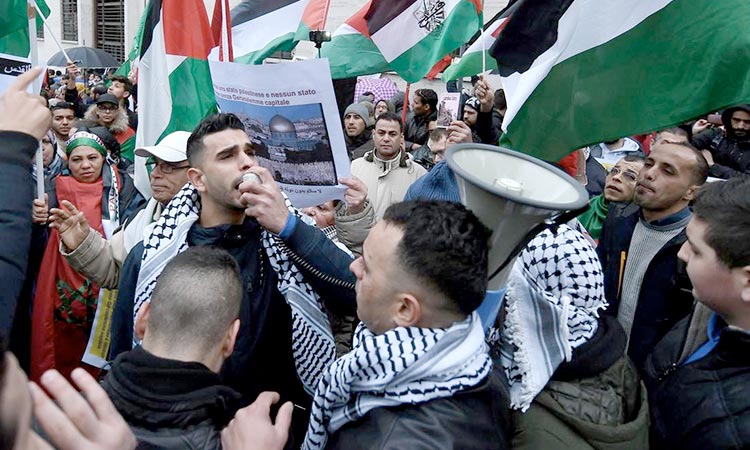 Demonstrators shout slogans and wave Palestinian flags during a demonstration in front of the US embassy in Rome. File/Agence France-Presse

Prime Minister Binyamin Netanyahu is facing the most serious crisis of his long career as the standard bearer of the Israeli nationalist and religious right. For several years middle-aged Israelis have demonstrated against his expansionist policies and corruption outside his West Jerusalem official residence. This is located on Balfour Street, named after the notorious British Foreign Secretary Arthur Balfour who pledged his government’s backing for the establishment of a “Jewish national home” in Palestine.

On Saturday, 10,000 gathered there while thousands rallied in Tel Aviv, near his personal residence at Ceasarea and at highway intersections across the country, to protest the coronavirus disaster and demanding his resignation.

In recent weeks, Israelis of all ages and all political persuasions have joined the unprecedented Jerusalem rallies and mounted demonstrations in Tel Aviv, Israel’s traditional protest capital, as well as in other towns and cities across the country. They are protesting everything that he has done and is doing.  His failure to handle Covid-19 which has infected 72,000 and killed 526 Israelis, to prevent economic meltdown, and to deliver in timely fashion essential cash hand-outs to the jobless and needy. They are furious over his indictment for influence-peddling and fraud. They are angry about the gulf between rich and poor which has deepened during his latest period in office (March 2009 until the present). They are enraged over the deterioration of Israel’s educational, welfare, and health care systems, particularly since the latter has been overcome by Covid-19.  They are infuriated over his arrogant appropriation of enhanced powers to battle the virus while continuing to enjoy a luxurious lifestyle as thousands of Israelis struggle with rising housing, food and fuel costs.

On July 25, 100,000 joined an anti-Netanyahu protest in Tel Aviv. Nahum Barnea Yediot Aharonot, columnist, called the protests “unprecedented” as they are mainly motivated by the demand for social change. Commentator Gideon Levy, known for his bitter criticism of Israel for its harsh treatment of Palestinians, said that Netanyahu has been “handed his walking papers” by the protesters.

On the 28th, hundreds gathered at the Tel Aviv home of Public Security Minister Amir Ohana after he urged senior police officers to crack down on anti-Netanyahu protesters. On the 29th, an exhibit appeared in Tel Aviv’s Rabin Square consisting of a life-sized mannequin of Netanyahu sitting at a heavily laden table after eating a sumptuous meal, a fat cigar waiting to be smoked.

When, last week right-wing thugs attacked peaceful protesters with bottles, chairs, and mace, sending five to hospital in Tel Aviv, Netanyahu declared this to be unacceptable. Opposition leader Yair Lapid responded, “The violence and blood spilled... in Tel Aviv is on the hands of Netanyahu and his  messengers. One who sows incitement will receive blood in return. Calling protesters spreaders of disease and inciting against civilians who protest is leading Israel into a civil war.”

Netanyahu and his camp retorted by tweeting that “leftists” and anarchists” have been calling for his death. As proof his camp reposted threatening videos which,  allegedly, appeared on the internet. Among them a woman says, “We will bury you and your wife and children.” And, a man states, “We know why you need security guards. Believe me, we know. One day you will be without security guards.” Others curse him and picture his head and neck in a noose. Many Israelis consider this to be news faked by his minions.

Anti-Netanyahu protests have not been confined to Israel. Last Friday a demonstration was mounted on the Golden Gate Bridge in San Francisco. Participants brandished Israeli and black flags and warned that he poses a danger to Israeli democracy. Protests took place yesterday in Boston, Seattle and New York as well as London and Berlin.  Activists accuse Netanyahu of dividing Israelis, following the example of Donald Trump in the US. The accusations made against protesters by Netanyahu also echo those hurled by Trumpites at protesters in US cities.

The current rolling demonstrations are notably different from earlier protests. The focus of Israeli rallies in 2011 was the high cost of living, inequality and social injustice. In 1995, Israelis took to central Tel Aviv to back then Prime Minister Yitzak Rabin’s commitment to the Oslo peace process which should have led to the emergence of a Palestinian state. He was killed at the end of the rally by right-wing extremist Yigal Amir, who had been incited by nationalists and Likud leaders, including Netanyahu, who opposed and still oppose Israeli withdrawal from the territories occupied by Israel in 1967.

Thousands of Israelis repeatedly protested Israel’s 1982 invasion of Lebanon. At the largest demonstration in September, some 350-400,000 gathered in Tel Aviv to call for the resignation of Prime Minister Menachem Begin and Defence Minister Ariel Sharon following the massacre by Israel’s Lebanese Christian allies of 3,500 Palestinians at the Sabra and Chatila refugee camps south of Beirut. Both Sharon and Begin were compelled to step down in 1983 following a commission which blamed them for the massacre. Begin left politics and died while Sharon continued his destructive career.

The current and past mass outbursts have re-energised leftist and liberal Israelis who had, and have, “internally exiled,” withdrawn from a political system which has shifted steadily to the right. This has taken place since 1977 when the neo-capitalist Likud came to power and was reinforced during the 1990s when 740,000 largely rightist Jews immigrated from the former Soviet Union to Israel. During this time the socialist ideology espoused by the leftist founders of the state has been expunged and the welfare system they built has crumbled. Only war, peace, high prices and Covid have brought into the streets the internal exiles, deeply disillusioned with Israel’s state of affairs. So far, they have not dramatically changed the course set for Israel by the right. It remains to be seen if the ongoing demonstrations will have a serious impact.  Even if, by some miracle, Netanyahu is forced to step down, there are other politicians of his ilk waiting to take over. 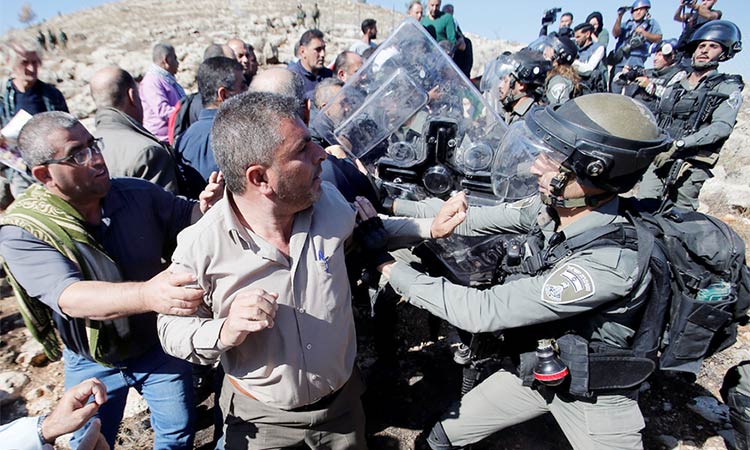 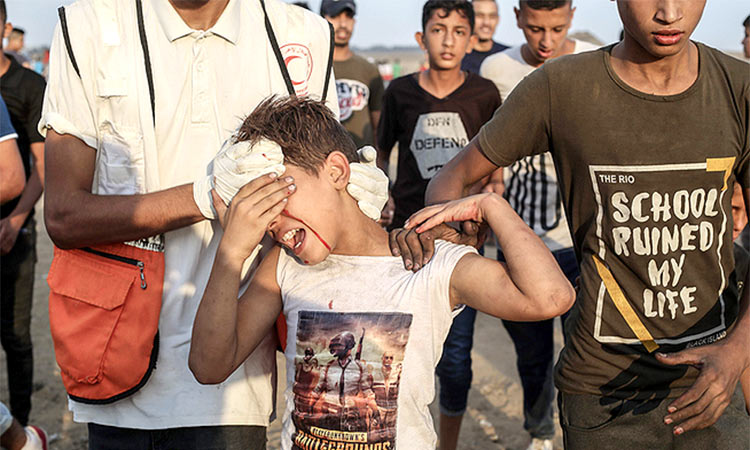 Five major European countries said an Israeli annexation of parts of the West Bank would “constitute a serious breach of international law.”