Biden steps up attack as Trump falters and Covid rages 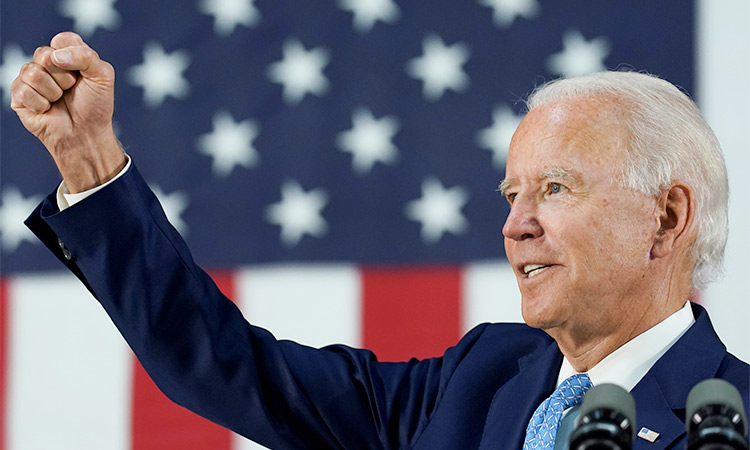 Democratic US presidential candidate Joe Biden thrusts his fist while answering questions from reporters during a campaign event in Wilmington, Delaware, US. File/Reuters

As a resurgent coronavirus rips through America, tearing especially into states that voted for Donald Trump in 2016, rival Joe Biden is stepping up attacks on his handling of the crisis as polls show the president’s already weak support waning.

“Month after month, as other leaders in other countries took the necessary steps to get the virus under control, Donald Trump failed us,” Biden said in a speech Tuesday afternoon near his home in Wilmington, Delaware. “Just look at the record.”

The remarks came as Dr. Anthony Fauci painted a grim picture for Congress about the pathogen’s spread and the nation’s failure to curb it. “Clearly we are not in total control right now,” said Fauci, director of the National Institute for Allergy and Infectious Diseases, in testimony that could further erode the nation’s confidence in Trump’s stewardship. “We’re going in the wrong direction. The numbers speak for themselves.”

Fauci said the nation is adding more than 40,000 cases of the novel coronavirus each day, and added, “I would not be surprised if we go up to 100,000 a day if this does not turn around.”

The failure to turn the trend in a positive direction, as other nations have been able to do, is a point Democrats are seizing on in their bid to cement the lead that presumptive Democratic nominee Biden has built in recent weeks, as voter dissatisfaction with the White House response to the pandemic soars.

Unlike the initial wave of illness and death, the current surge is hitting particularly hard in several major red states. No longer can Trump cast the public health crisis as the fault of mismanagement by Democratic governors and mayors, or depict it to his followers as a problem confined to blue coastal cities.

Amid the rise of COVID-19 cases in states such as Texas and Florida, Biden laid out a case against the president that appears to be gaining traction even with some Trump loyalists.

He presented a damning timeline of Trump’s response, arguing there were several points along the way where a more serious effort could have contained the infection, but Trump instead sidelined federal scientists and charted his own uninformed course.

Instead of demanding transparency from China when the outbreak emerged there, Biden said, Trump spoke fondly of its efforts. Rather than quickly use the Defense Production Act to accelerate production of protective gear for health care workers, Trump accused those workers of stealing masks. Instead of organizing national plans for contact tracing and cautiously reopening the economy, Biden said, Trump suggested Americans inject themselves with disinfectant.

“We’re facing a serious threat, and we must meet it as one country. But this president gives us no direction. He pits us against one another,” Biden said. “We can’t continue,” he added, “half with a plan and half just hoping for the best.”

The themes of Trump’s incompetency and divisiveness are not new to Biden, but the attacks are becoming considerably more potent as rates of sickness soar across the South and West and governors are forced to roll back businesses’ re-openings.

“The statewide lockdowns that so many Americans lived under for months were intended to buy us the time to get our act together,” Biden said. “But instead of using that time to prepare ourselves, Donald Trump squandered it. Now here we are, more than three months later, and we’re hardly better prepared than we were in March.”

Polls track the increasing voter dissatisfaction with Trump’s handling of the pandemic. Only 37% of Americans approve, according to a recent Reuters/Ipsos poll, the lowest percentage since the survey launched in early March.

Trump’s overall job approval also has dropped significantly since March, a decline apparently partly tied to the spread of the coronavirus into more Republican-leaning territory, according to a survey released Tuesday by the Pew Research Center.

The poll, which sampled the same group of people in March and now, found that Trump’s standing had worsened from 52% disapproving and 45% approving in March to 59%-39% now. Almost one-fifth of people who had approved of Trump moved to disapproval. Those who switched were more likely to be younger, less well off economically and more likely to live in places hardest hit by the illness, the survey found.

Separate state polls confirm that Trump is struggling in places that he won handily in 2016. Two recent polls in Texas, one from Quinnipiac University and the other from Fox News, found the presidential race in that long-red state to be a toss-up. Trump is also in trouble in Georgia, a state he won by more than 5 percentage points. And he is behind in most of the swing states, including Pennsylvania, Michigan, Wisconsin, Arizona and Florida, all of which he won in 2016.

As Trump stubbornly stays the course, refusing to wear a mask in public and deflecting responsibility for the increased caseload, other Republicans are no longer echoing his talking points. High-profile politicians, including Vice President Mike Pence, have begun urging the public to wear masks, warning even voters following Trump’s example that they are putting their communities at risk.

Just before Biden’s address, the Trump campaign accused him of politicising the coronavirus and repeated Trump’s claim that Biden fell short when the Obama administration was confronted with the H1N1 flu outbreak.

Campaign officials challenged the validity of multiple independent polls showing Trump trailing badly in the race. And they accused Biden of hiding in his home basement broadcast studio in Delaware, holding virtual campaign events and providing few opportunities for the press to ask questions.

“Joe Biden is hoping to ride out the next four months without having to answer any of these questions. He is not undergoing a thorough vetting,” said Tim Murtaugh, the communications director for the Trump campaign. “He is not undergoing serious scrutiny because his advisers know he is not up to it.”

On Tuesday, Biden did, in fact, answer reporters’ questions for an extended period, including several about reports that Trump had been briefed about a plot by the Kremlin to pay Afghans to kill American soldiers. Biden called it a “dereliction of duty” that Trump didn’t act.