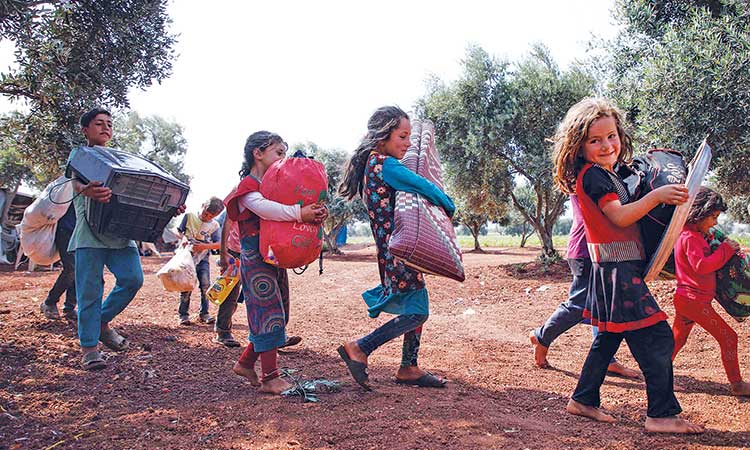 The scale of suffering in the country remains shocking, as pointed out by UN Secretary-General António Guterres.

Hundreds of thousands of people have been killed; half the pre-war population, or over 12 million Syrians, are displaced, including 5.6 million who fled the country; millions are going hungry or are malnourished; and 90 per cent of the population lives in poverty.

Currently as many as over 11 million Syrians need emergency assistance just to survive, many of whom rely solely on the UN and its humanitarian partners.

UN Emergency Relief Coordinator Mark Lowcock has noted that the Syrian crisis is approaching the length of the combination of the two World Wars, as it wreaks havoc and acute economic strain across the region.

The prices of essential food, medicines and fuel have been soaring and the Syrian pound fell to a record low against the US dollar this month.

The deadly COVID-19 pandemic has compounded the woes of the Syrian people. Children are among the worst affected.

One of the most tragic consequences of the horror story of the last decade has been the robbing of millions of children of their right to a decent education, as Lowcock points out.

The UAE’s commitment to supporting the Syrian people in times of crisis, particularly as they face the threat of the COVID-19 pandemic, has been total.

Represented by Reem Bint Ibrahim Al Hashemy, Minister of State for International Cooperation, the UAE participated in the Brussels IV virtual pledging conference on “Supporting the Future of Syria and the Region,” organised by the European Commission’s Humanitarian Aid Office, ECHO, and the United Nations with representatives of states and national and international organisations this week.

Reem Al Hashemy correctly acknowledged the efforts of medical staff devoted to performing their duties despite a shortage of equipment and resources that places them at grave professional risk.

This shortage, as she mentioned, requires us all to extend a helping hand to compensate for this lack of equipment and medical supplies.

The UAE has been a longstanding supporter of the Syrian people, having provided over $1 billion of emergency humanitarian and development aid since 2012 to Syrian refugees in Jordan, Lebanon, Iraq, and Greece, in addition to those internally displaced within Syria.

The UAE aid has included the provision of healthcare and the construction of field hospitals and refugee camps such as Mrajeeb Al Fhood, a joint Jordanian-UAE camp providing assistance, protection, and social services which currently runs at $30 million.

The UAE, along with its partners the US and Germany, contributes to the Syria Recovery Trust Fund, SRTF.

The previous three Brussels conferences included many stakeholders in the international community and aimed to revive dialogue and back UN efforts to reach a political solution to the Syrian crisis in accordance with Security Council Resolution 2254.

In addition, previous conferences offered donors the opportunity to announce pledges in support of the Syrian people. Last year, the Brussels pledging conference mobilised a record 6.2 billion Euros in pledges for 2019, in addition to 2.1 billion Euros for 2020 and beyond.

A political solution is the only best way to end the Syrian crisis and all parties should extend support to UN efforts in this regard, just like the UAE does.

Coronavirus has only served to heighten conflict, UAE tells UN

A core element of the UAE’s domestic and foreign policy is prevention and future preparedness, and we believe that constant horizon scanning is critical to understanding contemporary drivers of conflict and insecurity.