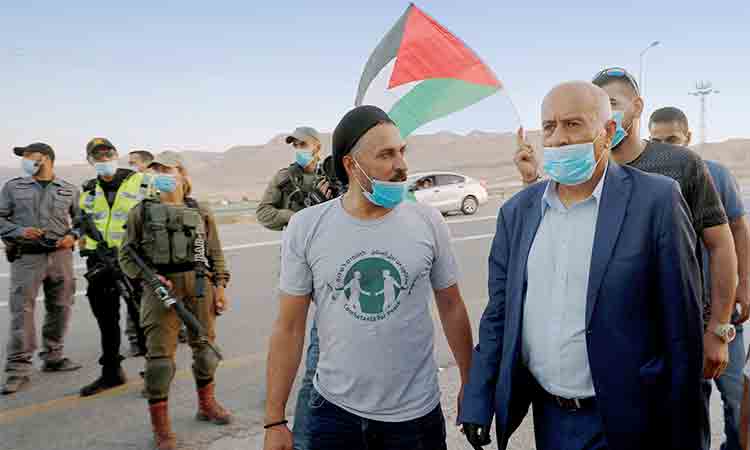 Jibril Rajoub (right), a senior Fatah official and head of the Palestinian Football Association, participates in a protest against Israel’s plan to annex parts of the Israeli-occupied West Bank, in Jericho. Reuters

British statesman Winston Churchill once said people should not be praised for not doing something they should not have done in the first place. This certainly fits the election campaign pledge by Israeli Prime Minister Binyamin to annex the Jordan Valley and Israeli colonies in the West Bank with the process to begin on Wednesday.

The world called on him to cease-and-desist: annexation is illegal under international law.  Annexation will deal a mortal blow to the moribund regional “peace process.” Annexation will finish off the “two-state solution” providing for a Palestinian state alongside Israel.

Annexation will extend Israel’s colonising enterprise to 30 per cent of the West Bank and bolster illegal Israeli colonies and impose an apartheid system on Palestinians. Annexation will demonstrate, once again, that, as far as Israel is concerned, “Palestinian Lives Don’t Matter,” at a time former Black and Brown colonial subjects the world over chant, “Black Lives Matter” in revolt against discrimination and persecution.

The line-up of naysayers is impressive: UN chief Antonio Guterres, British Prime Minister Boris Johnson, the European Union (EU), the Arab League and separately, the UAE and Jordan’s King Abdullah, Democratic Party members in the US Congress, and eight US Jewish organisations. Jewish colonists argue Israel should annex all not just parts of the West Bank while Defence Minister Benny Gantz and Foreign Minister Gaby Ashkenazi of The Blue and White component of Likud’s Netanyahu-led coalition have said they do not back annexation if it compromises Israel’s relations with its neighbours, notably Jordan.

Although the Trump administration’s team on Palestinian-Israeli peace did not reach a decision on the annexation issue during last week’s meetings, hyper-Zionist Jared Kushner, Donald Trump’s influential son-in-law, reportedly told Netanyahu to go ahead with implementation of his plan.

Since the Palestinian Authority is boycotting Israel due to the annexation threat, Netanyahu passed a message via Jordan that the Jordan Valley is not on the menu but suggested that annexation would apply to two or three colony blocs. Specifically mentioned were the Etzion Bloc along the Green Line demarcating the division between Israel and the West Bank, Ma’ale Adumin, seven kilometres east of Jerusalem, and Ariel, 20 kilometres east of the Green Line.

A group of colonies just south of Jerusalem and Bethlehem, the Etzion Bloc is a symbol for Israelis of their determination to conquer and colonise Palestinian territory.

The bloc was founded between 1940-47 and destroyed by Jordan’s Arab Legion on May 14th, 1948, the day before Israel’s war of establishment was launched. The bloc was restored and expanded after Israel occupied the West Bank in June 1967.

Established in 1975 as an outpost on expropriated  Jahalin bedouin land, Ma’ale Adumim was conceived as both a sizeable city and a strategic asset.  The site was chosen and colonised in order to flank occupied East Jerusalem, bisect the West Bank at its narrow waist between north and south, and make it difficult if not impossible for Palestinians to establish a state with territorial contiguity. To extend the colony and provide work for Ma’ale Adumim residents, Israel built an industrial park with 220 businesses on requisitioned land on the road to the Dead Sea.

Founded in 1978 in the central West Bank, the hilltop site of Ariel was chosen, allegedly, to halt potential Jordanian offensive targeting Tel Aviv.  However, as it is located deep in the West Bank , Ariel — like Ma’ali Adumim — laid claim to land well beyond the Green Line. Ariel has grown into an urban centre for nearby colonies.

During the influx of Soviet Jews in the 1990s, 6,000 settled in Ariel, doubling its population and ensuring its support for the colonising Likud.

UN Commission on Human Rights expert John Dugard of South Africa reported in 2005 that Gush Etzion, Ma’ale Adumim and Ariel will divide the West Bank into cantons or Bantustans. This is precisely the point and purpose of planting these colonies where they are.

Last week, UN Rapporteur on Human Rights in Palestine Michael Lynk echoed this assessment when he said, “What would be left of the West Bank would be a moth-eaten Bantustan, which would be the end not the beginning of a genuine Palestinian state. This would be a modern form of apartheid, a political anomaly in the 21st century.” He urged the international community, particularly the EU, to punish Israel for breaching international law by means of annexations. Since Israel has never been held accountable for such violations, the EU should insist that Israel abide by international law and define consequences if it does not. As Israel’s largest trading partner, the EU does have leverage if it makes use of it. Unfortunately, EU governments are divided on this issue although 1,000 European lawmakers have issued a letter warning Israel against annexation.

Returning to Churchill’s dictum, it has long been Israel’s strategy to announce sweeping land seizures and harsh anti-Palestinian policies and, when confronted with broad international opposition, back down partially by making measured moves and earning praise for adopting moderation. This could be what is happening now.

This approach has enabled Israel, hilltop by hilltop, kilometre by kilometre to appropriate and colonise Palestinian territory, annex all Jerusalem, build an apartheid wall and colonist-only roads in the West Bank, isolate Gaza, and maximise its exploitation of territory acquired by force, in breach of international law and the UN Charter, violations for which Israel has never had to account.  It is about time.  We are now at the dawning of the era of “Palestinian Lives Matter.”