The rise and rise of progressive star Ocasio-Cortez - GulfToday

The rise and rise of progressive star Ocasio-Cortez 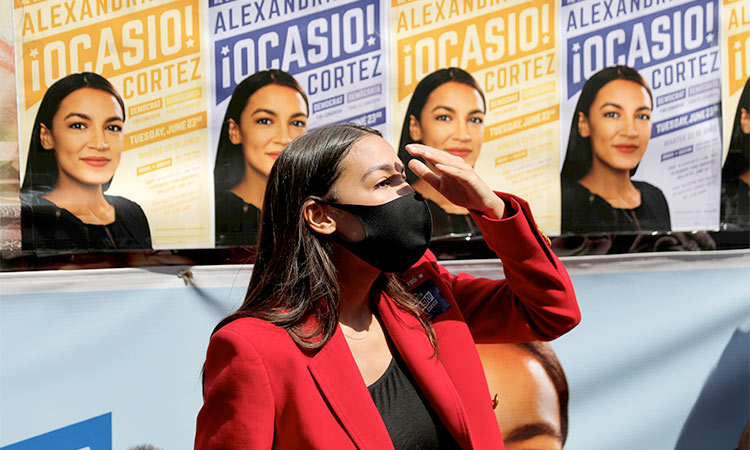 The 30-year-old progressive defeated a number of centrist primary challengers from her own party, paving the way for re-election in New York’s 14th district, a safe Democratic seat that covers the Bronx and Queens.

An increase in postal ballots due to the coronavirus means that many thousands of votes will not be counted until next week. But with early results showing Ms Ocasio-Cortez with a more than 50 per cent lead, the Associated Press called the race on Tuesday evening.

“To win with that kind of mandate is transformative,” Ms Ocasio-Cortez said in a video message to supporters as the results came in.

“It tells us that our policy positions are not an accident, it’s exactly what our community has been waiting for. And it’s the kind of leadership that our states and our country have been waiting for,” she added.

Ms Ocasio-Cortez’s easy transition from insurgent to establishment comes at a time of heightened speculation about her future. In the last two years, she has put her name to hundreds of pieces of legislation — including co-sponsoring a major climate change bill — and built a formidable political operation that puts her among the top fundraisers in Washington.

Greeting voters on the campaign trail near a school in Astoria, Queens, on Tuesday afternoon, she was tight-lipped about her plans beyond 2020. “I’m just focused on getting re-elected today,” she laughed, when asked by The Independent.

“I’m really looking forward to taking the experience from my first term and starting to apply that on the inside game — being more sophisticated in how we roll out legislation. Just like any job, you get better and better as time goes on,” she added.

But speculation is unlikely to die down anytime soon — not least because many see her, and the brand of politics she represents, as the future of the Democratic Party. There is already talk of a run for Senate and, down the road, perhaps a shot at the White House.

Her own primary victory in 2018 against 10-term incumbent Joe Cowley, then the fourth-ranking Democrat in the House, was one few saw coming. Ms Ocasio-Cortez, a graduate of Boston University, was working behind the bar in a restaurant in New York’s Union Square when she launched her run. She took office at 29 years old, making her the youngest woman to ever serve in congress.

She did not go alone. The Bronx native was part of a wave progressive Democrats who unseated long-term, centrist incumbents. The arrival in Washington of AOC and “the Squad” — Reps Ocasio-Cortez, Ilhan Omar, Ayanna Pressley and Rashida Tlaib — marked a leftward shift in Democratic party politics. Each of them advocated for more radical solutions to America’s ills and the excesses of Donald Trump’s presidency.

The question waiting to be answered by many of the primary races in New York on Tuesday was whether AOC’s arrival on the national stage was a harbinger of things to come, or an anomaly. And whether progressives could continue to pull the Democratic Party to the left at a time of national crisis and in a presidential election year that saw the archetypal establishment politician, former vice president Joe Biden, easily win the nomination.

This year, several races in New York have set up long-shot challenges to long-term incumbents that mirror AOC’s breakthrough campaign. One, in particular, could serve as a measure of progressive Democrats’ strength.

Jamaal Bowman, a former Bronx middle school principal who has been described as “the next AOC,” poses a serious threat to 73-year-old Eliot Engel, a 16-term congressman who was first elected in 1988. Democratic Party elders firmly closed ranks around Engel — Hillary Clinton, House Speaker Nancy Pelosi and New York governor Andrew Cuomo all endorsed him.

Bowman, however, secured the nod from AOC: “Not only is Jamaal a profound community leader, but I believe he’d make a fantastic colleague in the United States House of Representatives,” she said.

Due to the high number of absentee ballots being cast in the New York primaries — a result of the coronavirus pandemic — results from close races may not be known for another week. But early results showed Bowman far ahead of Engel. A win for him would suggest that the progressive wave is by no means over.

Political pulling power aside, AOC has already proven herself to be a formidable political operator and a fundraising behemoth. She raised more than $10.5 million over the last 18 months, according to data compiled by the Federal Election Commission.

Her most serious primary challenger in this election was a former TV anchor and former Republican Michelle Caruso-Cabrera, who has received substantial backing from large-dollar donors.

AOC, by contrast, raised most of her money from grassroots campaigns — small donations from supporters across the country. Small-dollar donations are responsible for nearly 80 per cent of the money the congresswoman has raised this cycle, per her candidate profile on Open Secrets.

She has also started using her national profile to boost progressive candidates by starting a political action committee to help win a progressive majority in the House.

Back in Queens, she has played a balancing act between the national stage and local issues. The district that AOC represents is one of the most diverse in the state of New York. Of its 650,000 residents, 50 percent are Hispanic, 17 percent Asian and 23 percent white, according to 2016 census figures. It also has the fifth-highest percentage of service-sector workers in all congressional districts.

Cierra Johnson, 34, happened to be passing by when AOC stopped in Astoria on Tuesday. She had spent the morning volunteering for the campaign, handing out flyers. Her husband is Bolivian and recently lost the opportunity to obtain a Green Card due to a ban by the Trump administration. She said she was drawn to AOC because “she was willing to stand up and fight.”

“In situations like this, people wait until there is a crowd, but she’s been speaking up before it was popular and that takes a lot. You have to reconcile a lot with yourself to be brave enough to do that,” she added.

Rumours abound that AOC may seek to repeat her giant-toppling debut with a primary run against Chuck Schumer, the Senate minority leader. She even received backing from an unlikely source in Trump, who has sought to cast AOC and the other handful of democratic socialists in Congress as the mainstream of the Democratic party as a means of convincing independent voters that the party is too radical.

“Actually, that would be a big improvement - and she would win!” Trump tweeted in response to a Washington Times article suggesting she would challenge Mr Schumer. 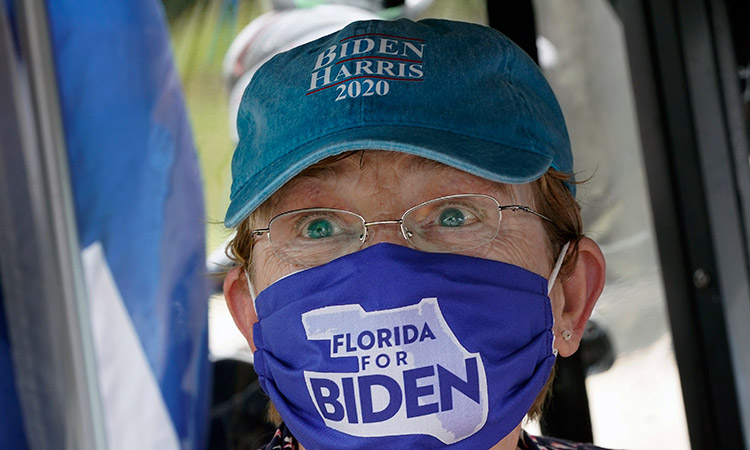