US bid to destroy Syria is a recipe for disaster - GulfToday

US bid to destroy Syria is a recipe for disaster 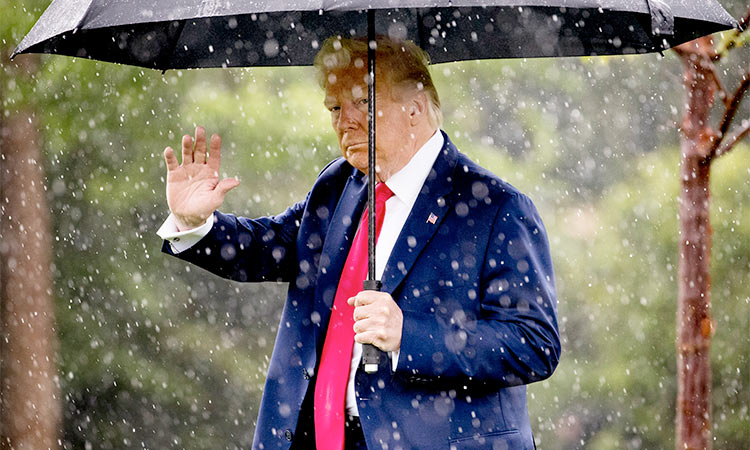 President Donald Trump waves to members of the media as he walks across the South Lawn of the White House in Washington. File/Associated Press

Decision-makers in Washington design policies for the Eastern Arab World on a country-by-country basis and all too clearly do not take into consideration the consequences for neighbours and the wider region of destructive unilateral interventions. The latest example of is the coming into force on the 17th of the so-called “Caesar Act” which targets with sanctions any government, agency or person outside Syria who does business with Syria.

Violators of the Act could suffer travel bans, refused access to capital, and risk prosecution. The US has been warned about the impact of this law on Lebanon’s devastated economy as well as Syria’s economic crisis but cares nothing about loss of livelihood and hunger among Lebanese and Syrians due to the rapid plunge in the value of their currencies.

While the legislation is said to focus on Iran and Hizbollah, US envoy James Jeffrey revealed its much larger objective, “The Syrian pound’s collapse proves that Russia and Iran are no longer able to float the Assad regime while the regime itself is no longer able to manage an effective economic policy, or launder money in Lebanese banks.”

The Caesar law is, therefore, a new tool in the US policy of undermining the regional reach of Iran and Russia and ousting the Syrian government by economic means since the US and its allies have failed to accomplish this aim by military means.

The US has learned nothing from its disastrous 2003 invasion and occupation of Iraq which has hollowed out the heart of the Eastern Arab World, installed a pro-Iranian Shia sectarian regime in Baghdad, destroyed the country, forced the Iraqi professional and middle class to flee, and created never-ending problems for Iraq’s neighbours. Syria and Jordan were swamped with more than two million Iraqi refugees. Trade in the Arab hinterland was disrupted. US destabilisation of Iraq led to the rise of al-Qaeda’s demon twins, Jabhat al-Nusra (now Hay’at Tahrir al-Sham) and Daesh.

The US conquest of Iraq was a goal set by influential neo-conservative members of a lobby group called the Project for the New American Century. They persuaded a biddable George W. Bush to wage a “war on terror” following the 2001 al-Qaeda attacks on New York and Washington and to invade and occupy Iraq, which was innocent of involvement, as well as Afghanistan, al-Qaeda’s host country. Iraq’s secular Arab nationalist government had to be taken down because of its opposition to Israel, although Iraq had been seriously weakened by the 1991 US-led war on that country.

While the neo-conservatives do not enjoy as much influence in Washington as they did before and during the Iraq war, their ideas linger and are promoted by multiple think tanks, including the Washington Institute for Near East Policy, the research arm of the American Israel Pubic Affairs Committee with which Jeffrey has been associated as a research fellow. US Secretary of State Mike Pompeo, Vice President Mike Pence, Donald Trump’s son-in-law Jared Kushner and other members of the administration are all deeply committed to Israel no matter what it does.

Syria is in double jeopardy because of its longstanding anti-Israel stand and its four decade-old alliance with Iran. Having deleted Iraq as a regional power, the US is keen in following through by seeking to do the same to Syria.

This would be a greater catastrophe than the Iraq debacle. Even though France, the post-World War I colonial power, divided Greater Syria into modern Syria and Lebanon the political, economic, social, and familial ties between the two countries are very strong.  Lebanon and Syria cannot live or prosper without the other. The nine-year war in Syria has contributed greatly to Lebanon’s economic decline and stirred its political troubles while Lebanon’s economic meltdown over the past year has led to the economic and financial collapse of Syria.  If Syria’s government falls and is not replaced by a strong central authority, that country will dissolve into provincial and local warlordism, destabilising not only Lebanon but also Jordan and deepening existing instability in Iraq.

As Trump administration regional policy makers are closely tied with Israel they, wittingly or ignorantly, follow a long-term Israeli effort to undermine and fracture neighbouring Arab states into ethnic and sectarian statelets. Israel’s first prime minister David Ben Gurion argued in favour of such a campaign as Israel, a sectarian Jewish entity, would not be an outlier in a region dominated by secular, pluralist, nationalist states. As a result of the 1991 and 2003 US wars on Iraq, that country has already been divided into ethnic Kurdish and ethnic Arab regions. Further division may not be off Washington’s agenda if former Vice President Joe Biden moves into the White House next January as he formerly favoured partitioning Iraq into ethnic and sectarian statelets. One can only ask: why do US and other Western politicians think they can determine the very existence of countries in this region and elsewhere even though their borders were delineated by colonial powers decades ago?  Division always means death, dislocation, and disaster for the peoples who live in targeted countries. And, when desperate refugees flock to US and European shores these days, they are rebuffed.

Why now the Caesar law? At the end of last August, it seemed Syria was on the road to recovery. The Syrian army had recaptured a wedge of territory in al-Qaeda controlled Hama and Idlib provinces and appeared ready to advance against al-Qaeda affiliates based there. The Damascus International Fair had attracted the participation of businessmen from the United Arab Emirates and Oman as well as a host of other countries seeking to invest in Syrian revival and reconstruction.

The Caesar law is designed to prevent Syria from regaining lost territory and at least partially repair the harm inflicted by years of war and devastation.  Today the government controls 70 per cent of Syria, the US-backed Kurds about 25 per cent in the north and east, and Turkey — via Syrian surrogates and al-Qaeda — about five per cent consisting of Idlib and tracts of territory along the Turkish border. This is hardly a recipe for the stability and economic wellbeing of the countries of the Levant and the Eastern Arab World as a whole.