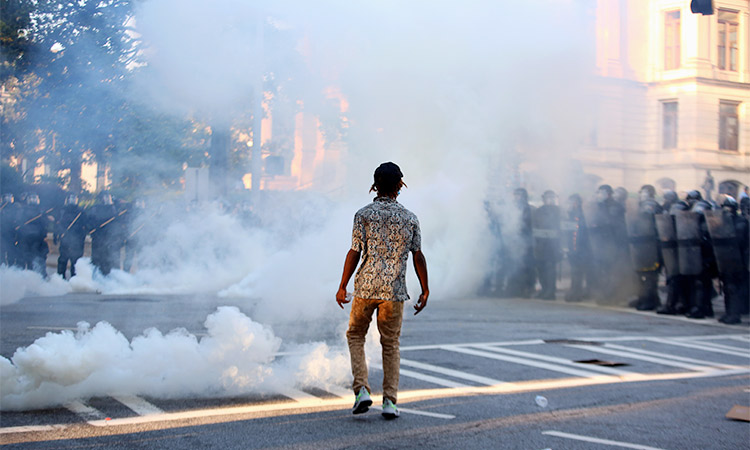 A protester stands amidst tear gas during a protest against the death of African-American man George Floyd, in Atlanta, Georgia on Monday. Reuters

Bill Torpy, Tribune News Service
It was Friday evening when Mawuli Davis, a lawyer who often handles civil rights cases, posted a photo on Facebook from atop a parking garage. It was looking down on an Atlanta police squad car burning outside the CNN Center as a throng of people massed nearby in the street.

“We have left the CNN Center,” he wrote. “Please discourage our young people from going to the CNN area. It is a very dangerous situation right now.”

I called him Saturday, figuring he had been at CNN to be interviewed and stumbled upon the mayhem. He was set to head a gathering Sunday at the Decatur city square in response to several racially charged incidents connected to high school students there.

Was he in downtown Atlanta on Friday night taping a segment for CNN? I asked.

Earlier Friday evening, Davis was at his Decatur home and flicked on the TV and saw something that frightened him: Images of cops in riot gear and angry people massing in the streets in front of CNN Center.

Soon, he saw an Atlanta police car burning and the protest degenerating into a riot.

The protest started hours earlier. Demonstrators were to march to the state Capitol and back to decry the death of George Floyd, a black man killed by three Minneapolis cops, one who kneeled for nearly 9 minutes on Floyd’s neck as onlookers pleaded for him to stop.

The video was most disturbing because the cop kneeling on Floyd’s neck was doing so casually, confidently and almost comfortably, like it was just another Monday at the office. Meanwhile, by standers had to do just that — stand by. If any of them had jumped in to stop it, they would have faced a beating and probably a felony charge.

The cop, Derek Chauvin, has since been charged with third-degree murder. But the cruelty and helplessness displayed in the video delivered a double-whammy that’s unleashed a tsunami of public outrage and anguish.

As Davis watched the crowd on television, he sensed that pent-up fury and danger.

“Once I saw the police car on fire, my wife and I got in the car and she drove me down as close as she could,” he said. Davis then hopped on a bike he’d put in the trunk and ended up on the parking lot overlooking the commotion. He then committed to speed-dialling his younger son, Khari.

“These people were enraged,” Davis said. “They felt America had it coming; they’re in a different place. I’m enraged, too. But I can’t let my son get hurt.”

He’s an activist. But first, he’s a dad.

“I called him (on the phone) and said, ‘C’mon, man, I know this is what you have to do, but a statement has been made.’ I found him and said it was time to go.”

Khari Davis, a 20-year-old rising junior at Howard University, said it wasn’t as simple as his dad making a couple of calls. “I knew he was calling,” he said. “I was just ignoring him. He was blowing up my phone. But I wanted to witness this. It seemed like an important moment.”

“There was a lot of anger,” Khari Davis said. “You keep punching someone in the face, something will happen.”

He said the march had finished and people started milling in the streets. Some started throwing bottles and rocks, and then vandalizing CNN. He said officers went over to protect the building.

“When the cop cars were unattended, people noticed and took advantage of that,” Khari Davis said. “Next thing you know, it’s happening all over. The police were overwhelmed. They kind of let it happen. It was a surreal moment.”

In fact, when dad was photographing the burning car from up high, son Khari was doing the same in the street. The older son, Kobie, arrived later.

It’s unclear who started what. There’s been discussion about “outside agitators” firing it off. This may be our civic defensiveness that likes to protect the notion of the Atlanta Way, the sensible route that helped Georgia’s capital city evade the worst violence of the civil rights era.

Or maybe there’s something to it. Mayor Keisha Lance Bottoms said there were “anarchists” involved Friday.

On Saturday, Atlanta police said they had arrested 71 people, but an accounting of who and where they were from was not released. Injuries seemed to be few, as those bent on destruction kept it focused on property — a far cry from the Rodney King riots here in 1992, during which beatings were common.

“When I heard there were rumours about violent protests in Atlanta, I did what a mother would do. I called my son, and I said, ‘Where are you?’ I said, ‘I cannot protect you. A black boy shouldn’t be out today,’” she said.

“This is not a protest,” the mayor added, surrounded by music stars Killer Mike and T.I., as well as activist Joe Beasley. “This is not in the spirit of Martin Luther King Jr. This is chaos. A protest has purpose.”

Marcus Coleman, one of the protest’s organizers, posted a video tearing into the mayor and criticizing Killer Mike, T.I. and Beasley. “Some folks don’t mind an uprising because it’s a direct action to getting killed, murdered and (messed) over in court,” he said.

I called Beasley, who said he had “some anxiety over what’s going to happen” the next couple of days. “I think the pent-up anxiety brings out violent behaviour,” he said. As to Coleman’s statements? “Marcus is a friend,” the elder activist said. “Sometimes we have to stretch our friend’s imaginations.”

Mawuli Davis cancelled his Sunday rally in Decatur for safety’s sake, saying, “It’s not responsible for me to have it.”

When I spoke with him Saturday, he was meeting with other black men to go out over the weekend and appeal to boys and young men to stay home. “We don’t want them hurt or getting arrested,” he said. “Tonight, I’m trying to get other sons out safely.”

He said they need to focus on organized protesting, on getting people to vote, on engaging in public policy and educating others on vital issues.

Those might not be as cathartic as pitching a rock through a window. But they will mean more in the long run. 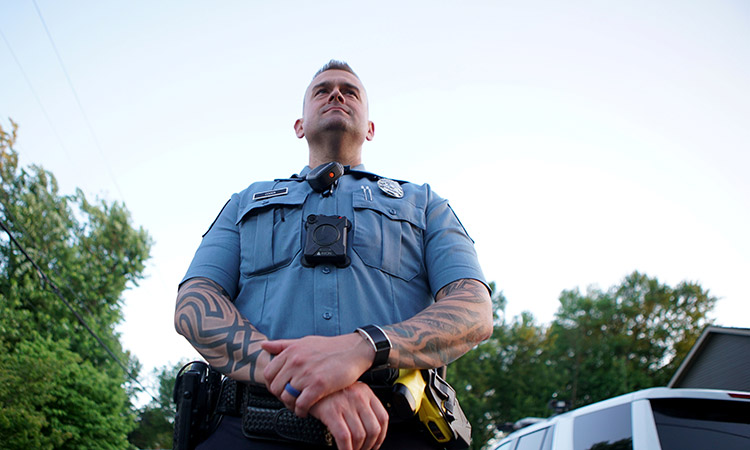 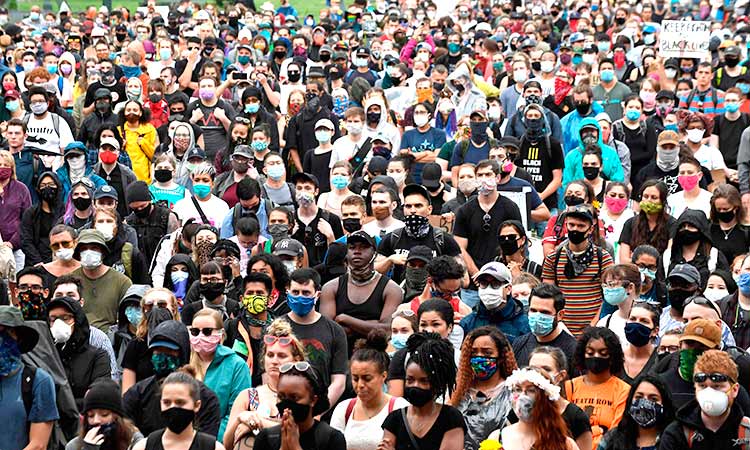