The EU-UK dialogues in desperate need of a new script 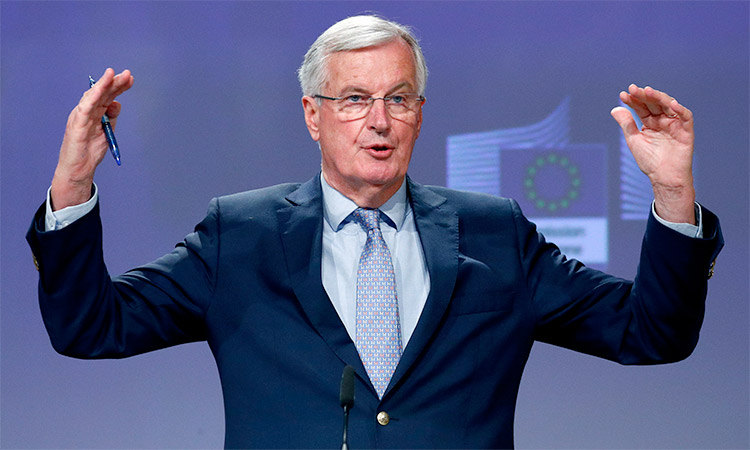 European Union’s chief Brexit negotiator Michel Barnier speaks following the Brexit talks between the EU and Britain at Brussels on May 15, 2020.

The Brexit negotiations taking place between Michel Barnier and David Frost have the surreal quality of one of Alice in Wonderland’s tea parties. They cheerfully debate a version of reality which no longer exists and may never come back.

Frost, the dormouse, is exercised about something called “sovereignty” and Barnier, the Mad Hatter, is obsessed by “level playing fields”. But the guest of honour – one Mr Corona Virus – has no idea what either of them mean. He doesn’t stop obediently at national frontiers and knows that not every country moves in step.

Once upon a time, before the tea party, we had something called “freedom of movement” across Europe, which many people in the UK decided that they wanted less of. First David Cameron, and then later Theresa May, weren’t able to deliver that, and so we had governments committed to stopping it even if it meant giving up a lot of other things we liked and benefited from. That was roughly where we stood BC (Before Corona).

Now, in an era known as AC, we are finally discovering what no freedom of movement looks like. All movement is frowned upon and certainly any shift across frontiers. Large numbers of people are stranded and, even when allowed to travel, will not want to be quarantined on their return. Except for little pockets, such as the three Baltic states, Europe is divided by a patchwork of restrictions which are reinforced by fear and will continue in some form for a long time.

It isn’t just Europe that is rediscovering frontiers. Indian states are putting up border posts to keep out unwelcome immigrants from other states. Even in our own country, we are having to work out what is meant by our shared “sovereignty” when English people invade Welsh villages where different lockdown rules apply.

Another casualty of the pandemic is the single market and those “level playing fields” loved in Brussels. The state aid rules, which were called in to challenge any industrial interventions I wanted to make as a minister, have been suspended. Countries such as Germany, which will claim that they have spent years mending the roof while the sun shone, are now spending vast sums supporting their domestic companies. When, or if, the pandemic ends, those German companies will enjoy a competitive advantage over those in the rest of the EU.

The rest of the EU – and presumably Britain, “enjoying” its new sovereignty outside the union – will want to catch up, leading to a ruinously expensive subsidy competition.

Then there is the lack of solidarity. Italy was badly affected at the outset and could reasonably have expected help from its friends, not least as a vulnerable economy with an elderly population. European financial help did eventually arrive, and without the conditionality which caused resentment during the financial crisis, but the fact that the money comes as a loan rather than a grant adds to Italy’s barely sustainable public debt. Anti-EU feeling is running high in Italy and is also growing in Spain.

The other vulnerable southern European economy is Greece. The Greek authorities have managed the pandemic far better than their richer European friends and are something of a role model. But Greece will be brutally exposed again economically when its tourist industry is devastated over the next few months. Another crisis is brewing. Solidarity funding will have to be expanded, including a major input from the European Investment Bank (which Britain is, idiotically and unnecessarily, walking away from).

Most crucial of all is the strain which the pandemic is putting on the eurozone. The eurozone survived the financial crisis against the confident predictions of many, including British Eurosceptics, that it was bound to fail. And the European Central Bank got off to a good start at the beginning of the pandemic, continuing Mario Draghi’s promise to “do what it takes” to preserve the eurozone. It made a commitment, as part of its monetary policies, to buy disproportionate amounts of Italian government bonds, helping to stop any escalation in their yields which would add to the cost of servicing Italian debt.

But a major new threat has emerged in the form of a legal ruling by the German constitutional court, that their government should challenge the ECB for acting beyond its remit. The ECB’s decision to shore up Italian debt, the court said, encroached on the role of national parliaments. If the ruling is taken to its logical conclusion, it could permanently stop the ECB from doing its job properly.

In a debate on Europe in which I participated last week at the (virtual) Cambridge Union, the Italian participant, the impressive Nathalie Tocci, made the point that the German court may actually be helpful in forcing greater honesty. Instead of the ECB carrying out what amounts to fiscal policy (spending), eurozone governments like Germany will be forced to do what they should have been doing from the outset: making transparent fiscal transfers from their economy to weaker ones. Otherwise the whole eurozone structure could collapse.

To that end, Angela Merkel and Emmanuel Macron have now jointly proposed that the EU borrows on the financial markets, with the aim of distributing €500bn (£448bn) through grants to economies around Europe hit hardest by the current coronavirus crisis.

The rather juvenile finger-pointing after the recent round of UK-EU negotiations obscures the fact that neither the EU nor the UK are in great shape – and both could suffer grievously from mishandling both the pandemic and the post Brexit agreements.

There is also an opportunity. The British need to recognise that the EU has been extraordinarily good at reinventing itself at times of crisis. And the Europeans need to recognise that this is a bigger crisis than the ones they have managed their way out of before. Both sides should tear up the script and approach the negotiations in a different way.

On one side of the Channel, the EU should understand that it is unlikely to survive in its present form, with all the old dogmas which Barnier represents. It must adapt or die. On the other side, the UK is also heading for a very different and more hostile world from the shiny new trade agreements Brexiteers promised. What may emerge is the long-discussed Europe of different tiers with a tightly integrated core, Germany and France at its heart, and a looser group closer to the British ideal and which Britain could join without being seen to tear up its Brexit mandate.

My pro-European friends are clamouring for delay to the Brexit endgame, by means of an extension to the transition period. In truth, there is little merit in such an extension if it just means returning to the same arguments and the same script in a few months.

But delay would be justified if the objectives are clear, positive and ambitious: not just about Britain taking its ball home but a true reform of how the game is played.

There are thoughtful members of the government, including Michael Gove and Rishi Sunak, who may recognise that opportunity. Meanwhile, Boris Johnson, for all his shaky grasp of detail, is comfortable painting big pictures with the help of his European WhatsApp friend, President Macron.

If they both understand that Europe has to be bold, the union could emerge from Brexit, and from coronavirus, strengthened for the coming decades.