US void forces Australia to stand up against China - GulfToday 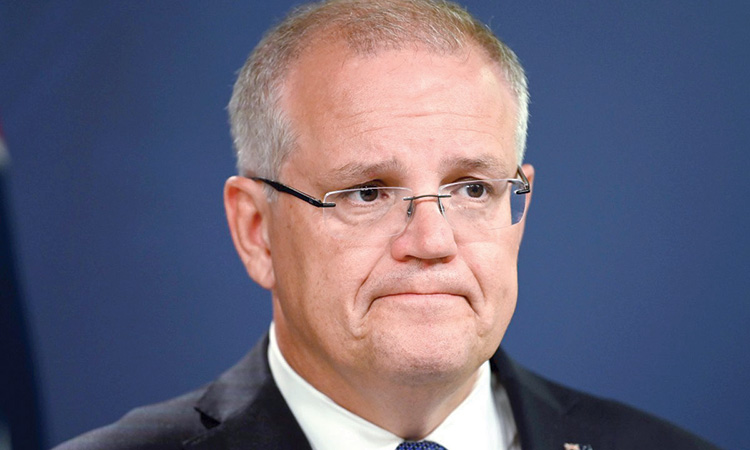 Australian governments have long sought to benefit from both a strong alliance with the US and a deep trading relationship with China.

As Washington and Beijing edge from competition toward outright hostility, Australia looks to be setting out on a new path — as a vocal member of middle-power nations willing to stand up to an increasingly assertive China.

While that change of tack may appear to be full-square behind President Donald Trump’s China bashing, it’s more likely to be a consequence of US absence than proximity. Trump’s inward-focused “America First” agenda has left a void in the Indo-Pacific region that forces Australia to take a stand, even at the risk of retaliation.

“Australia’s interests will be best served by a multipolar region than one that’s dominated absolutely by China,” said Richard Maude, a former senior adviser on foreign policy and national security issues in the Office of the Prime Minister who is now an executive director of policy at the Asia Society. “China likes to condition countries to defer automatically to its interests for fear of retaliation, and that’s not a position that Australia can allow itself to be put into.”

While Australia’s tensions with China have been simmering for years, the potential for economic damage is now becoming more real. After Prime Minister Scott Morrison’s government last month initiated calls for an independent probe into the origins of the coronavirus pandemic, Beijing responded by claiming Australia was doing Trump’s bidding, and its embassy in Canberra warned that Chinese consumers could choose to boycott the nation’s exports.

In the past week, China indicated that an anti-dumping probe into barley exports could see it implement 80% tariffs on the grain, while meat imports from four Australian processing plants have been suspended for “technical” reasons. While China says the issues are unrelated, Australia’s government has called the boycott threats “economic coercion.”

Despite concerns in Canberra that the US has grown more unreliable under Trump, Morrison won’t be abandoning the nation’s alliance with its Five Eyes intelligence partner. Australia has stood with American forces in every major conflict in the past 100 years, and the US presence Down Under is marked by a joint defense station used for global surveillance in central Australia and some 2,500 Marines in the northern port of Darwin on Asia’s doorstep.

The allies have been closely tracking each other on their China policies for years, with bans on Huawei Technologies Co. equipment in 5G networks on national security grounds and concerns Beijing operatives may be hacking their governments and stealing secrets. Australian leaders have often touted “shared values” with the US.

But with Trump showing tendencies to disregard traditional alliances, Australia is aware that it may be exposed — especially as its status as one of the most China-dependent countries in the world means it has a lot to lose from damaged trade ties with Beijing.

Its exports to China were worth almost $120 billion last year, more than 2 times the volume of sales to its No. 2 trading partner, Japan, and almost 20 times those to the US. Australia is one of a few nations to run a substantial trade surplus with Beijing — at some $61 billion, it’s almost double the value of its total trade with the US.

That level of economic dependency has spurred calls to diversify. Yet while Australia has been in talks with nations including the US, India and Japan on restructuring China-reliant supply chains in a post COVID-19 world, it’s the nation’s calls for an investigation into the virus that have particularly irked China, especially as Germany, France and the UK have since joined that push after lobbying from Morrison.

Even after China’s Foreign Ministry spokesman Zhao Lijian said on Tuesday that the trade issues involving beef and barley aren’t related to the proposed probe, his answer — to an Australian reporter’s question — segued into a criticism of the nation’s support for such action.

“Political maneuvers under the context of the pandemic will only disrupt international anti-virus cooperation and won’t gain any support,” Zhao said, adding that he hoped other nations would “join China in promoting international cooperation and mutual trust, rather than say something nice while doing the opposite.”

The chief executive of the Australian Meat Industry Council, Patrick Hutchinson, is urging caution from the government, even while stressing that he believes the halt to Chinese imports from the four meatworks isn’t due to political tensions.

Tensions between the nations increased on April 19 when Australian Foreign Minister Marise Payne appeared to go out on a limb by calling for a global inquiry into the pandemic’s origins, which quickly raised the ire of China. On May 5, the European Union announced it was on board, saying it will put forward a proposal to the World Health Organization’s governing body on May 18 urging an independent probe.

Still, Australia has balked at supporting US Secretary of State Michael Pompeo’s claims there was “enormous evidence” that the coronavirus outbreak sprung from a high-security virology lab in Wuhan. Morrison has repeatedly said the scientific evidence points to the pandemic originating in a Chinese wildlife market, a practice his government wants banned.

The Australian prime minister may feel he has a groundswell of domestic support to call for the probe. A poll by the Sydney-based Lowy Institute on Thursday found that just 31% believe China handled the outbreak well, with 68% less favorable toward Beijing’s system of government as it applied to the pandemic.

“This coronavirus crisis is a huge blow to China’s prestige, not necessarily among elites, but among the general public — ordinary people feel very strongly about this,” Alexander Downer, a former Australian foreign minister who now chairs the U.K. think tank Policy Exchange, said in a video conference last month. He called for a “proper international investigation,” saying there’s a need to “ram that message home” to China.

Australia and China have clashed before. Allegations of Beijing’s meddling into Australia’s government, universities and media led to the passage of anti-foreign interference laws in 2018.

While warning against “unprecedented Sinophobia sentiment in Australia,” Zhu Feng, the dean of the Institute of International Relations at Nanjing University, said that mutual dependency is still a big part of bilateral relations. China is aware that its steel producers have few other options than buying from Australian-based iron ore producers — a business worth around $40 billion a year.

“We shouldn’t exaggerate the conflicts with Australia or incite nationalism or reinforce victim mentality at home,” Zhu said. “China shouldn’t take the path of populism.”

While Australians are becoming more wary of China, they’re also concerned about the direction of the US under Trump. Only one in 10 respondents to the Lowy Institute survey said they believe America has handled the pandemic crisis well, 53% said it will make its ally less powerful — and 73% want Joe Biden as the next president.