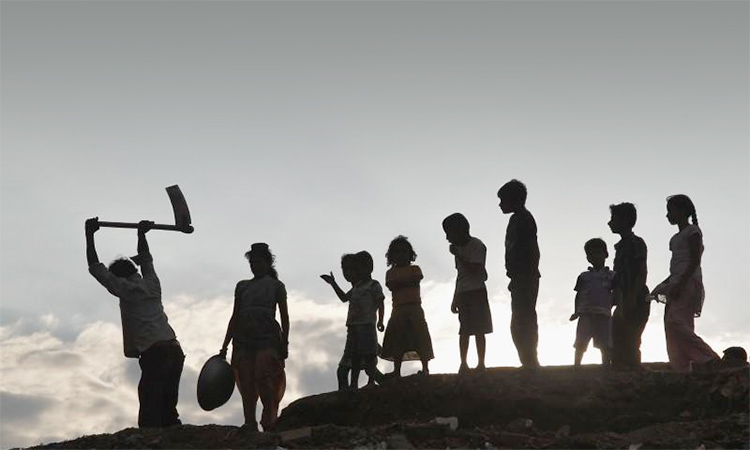 The workers, rendered jobless by closure of factories, were trekking along the rail track to their homes in Madhya Pradesh. A survivor of the gruesome incident said they had been walking day and night without food.

Mahatma Gandhi had often said India lived in its villages. It certainly was true in his time.

When the 1951 census, the first after Independence, was taken 82.7 per cent of Indians still lived in the villages. With the growth of urban centres and large-scale migration from villages in search of jobs, the rural population came down to 61.8 per cent by 2011.

A clear picture of the current rural-urban distribution will be known only when the next census is taken. Work on it, due to begin last month, has been put off due to unfavourable ground conditions.

About 450 million out of India’s 1.3 billion people make a living as casual or contract labourers. Many of them work at places far away from their homes.

The railroad tragedy prompted a cartoonist to make this sardonic comment: “India lives in its villages, works in its cities and dies somewhere in between.”

The World Health Organisation had lavished praise on Prime Minister Narendra Modi for declaring an early lockdown. With air, rail and road services cancelled following the lockdown, millions were stranded away from home.

The government’s assessment is that the lockdown prevented rapid spread of the pandemic. True as it may be, the claim needs to be weighed against what it cost the nation. A bit of planning would have reduced the cost as well as the pain.

When Indians stranded abroad and within the country clamoured to return home, the government asked them to stay where they were. Neither the Centre nor the state governments provided adequate relief to the stranded people, who included those rendered jobless by the lockdown.

In the absence of transport to go home, many started walking stoically towards their distant homes. It was the beginning of the biggest mass movement of people in the subcontinent since the Partition.  When some foreign countries asked India to take back its nationals to reduce the pressure on their health services, the government played for time, ignoring its responsibility to bring them home.

Callousness is the word that comes to mind when one thinks of the authorities’ apathy to the plight of the stranded people, many of them belonging to vulnerable sections. A few state governments provided them some relief. Some sent buses to bring back their people.

As the Centre eased the lockdown restrictions, it became possible for those stranded in India and abroad to return home. But, unlike on similar occasions in the past, most of them had to bear the cost of their repatriation.

Even the Indian Navy, which is not a commercial operator, reportedly collected fare from people it ferried from neighbouring countries. The Railways ran special trains to carry migrant labour and there were arguments over which government should foot the bill.

The Karnataka government asked the railways to cancel the special trains at the instance of business interests who wanted the workers to be held back to help resume operations.

Protests by the workers, and the support extended to them by human rights groups, forced it to revise its stand and let the workers go home. In their anxiety to help industries to resume operations and revive the stalled economy, several state governments diluted the labour laws.

Modi had recently asked the states to try and attract the foreign firms pulling out of China after the coronavirus experience.

The changes the states made are on the lines contemplated by the Modi administration, which is known to have been keen to repeal laws that protected labour interests with a view to placating foreign and domestic corporates.

The amended laws permit factories to operate 12-hour shifts with no financial compensation for the additional four hours of work. The Central and state leaderships appear to think they can save the economy by creating conditions which will appeal to rapacious foreign capital.

The Rashtriya Swayamsevak Sangh, the ideological parent of Modi’s Bharatiya Janata Party, has an affiliate, Swadeshi Jagaran Munch, which is critical of foreign direct investment. It also has a national labour organisation named Bharatiya Mazdoor Sangh. Neither body has reacted to the abrogation of labour rights.

Modi can secure the acquiescence of RSS affiliates. But he is making a serious miscalculation if he thinks public opinion will reconcile itself to jettisoning of labour laws under cover of the pandemic.