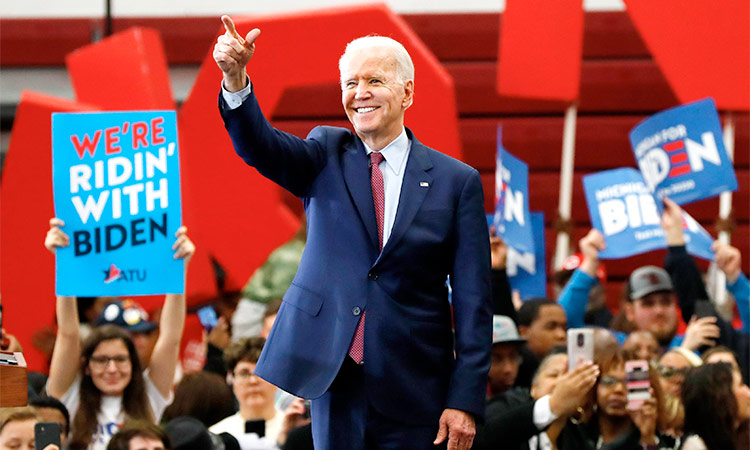 But even as Hispanics are expected to comprise the largest nonwhite voting bloc in the 2020 election, leaders of the community concede that Latina women enter the veepstakes process as less likely prospects, rather than top-tier hopefuls — the result of a still-maturing power base that’s yet to be fully realized.

Elected officials, interest groups and Hispanic operatives are planning to present a case for a handful of Latina prospects to the Biden campaign. But at the same time, they are emphasising that some type of ethnic diversity is the most important ingredient for a Democratic ticket that will all but certainly be helmed by a 77-year-old white man.

“The Latino community has the potential to be kingmakers and queenmakers. We actually have larger numbers than African Americans, but I think we have a little work to do in flexing our muscle,” said Maria Cardona, one of the top Latina Democratic strategists in the country, noting that the turnout rate for Latinos remained below 50% in 2016. “We’re leaving so much power on the table.”

Latinas will almost certainly appear on Biden’s vetting list, which he said on “The View” on Tuesday would be narrowed to “about 11” in the coming weeks and will include only women. Catherine Cortez Masto of Nevada, the first Latina elected to the US Senate, is the first name cited almost universally by Hispanic leaders as a credible contender. A former state attorney general and gubernatorial chief of staff, and the current chair of the Democratic Senatorial Campaign Committee, Cortez Masto boasts an impressive resume. Yet the 55-year-old first-term Mexican American senator is largely an unknown figure outside of Nevada and Washington’s small coterie of national Hispanic interest groups.

Democrats are also floating names such as New Mexico’s Michelle Lujan Grisham, who’s the first Democratic Latina governor and a former congresswoman, and Reps. Veronica Escobar and Sylvia Garcia, the first two Latinas elected to Congress from Texas in 2018.

Cardenas said he’s determined to see Latinas included in the mix, but believes Biden’s selection is not a prerequisite to motivate Hispanics to the polls this fall.

“Hispanics are going to be coming out in record numbers in November,” he said. “Because the choice is Biden-Trump.”

The Latino Victory Project, a political action committee created to increase Hispanic political power, has also privately lobbied the Biden campaign on the need for a Latina to appear on the VP shortlist. But Mayra Macias, the PAC’s executive director, said she understood the rationale behind the inclination toward selecting an African American woman.

“Black women have been critical to Democratic Party wins and a critical part of the vice president’s coalition,” Macias said. “We still have work to do on our end ... to solidifying Latino power.”

She said that meant converting more eligible Latinos into registered voters and then turning them out at a higher rate — a task that would become easier, according to Macias, just by placing someone like Cortez Masto in the running mate conversation. Whereas the Latino turnout rate was 48% in 2016, black turnout registered 12 points higher, at 60 per cent.

“Until we solidify that message that Latinas are a critical backbone of the Democratic Party, I think we’ll continue to be seen as an afterthought,” she said. “There’s a lot of room to grow.”

In 2016, African Americans and Hispanics each made up about 10% of the total electorate, according to the Pew Research Center. But in 2020, Hispanics are expected to edge ahead of African Americans in total vote share, with more than 32 million eligible voters.

The expected rise in the percentage of the Latino vote is already reshaping the electoral map. Arizona is becoming a battleground state where some Democrats already speak of Biden as a slight favourite over President Donald Trump. And in Texas, Trump still holds an advantage, but has seen his average polling lead slide to just under 3 percentage points.

“What you saw coming out of 2018 is a remarkable increase in Latino turnout. Upwards of 100% plus increases in heavy Latino districts, throughout the Southwest. We should plan, as we saw in early vote numbers, record turnout in places like Florida and Arizona,” said Cristobal Alex, a senior adviser to the Biden campaign. “They will be difference makers in several battleground states.”

While Biden’s shoe-string campaign was outworked by Bernie Sanders’ well-oiled operation for the Latino vote in earlier contests in Nevada and California, the former vice president improved his showing among the constituency in later primary states like Florida and Arizona once he was the front-runner.

Placing a Latina on the ticket would signal a slightly different electoral path for Biden that bets on the Southwest, whereas an African American running mate would demonstrate a more conventional play toward boosting black turnout in urban Pennsylvania, Michigan and Wisconsin, as well as North Carolina and even Georgia.

Given that a drop-off in black turnout was a determining factor in Hillary Clinton’s 2016 loss, Biden faces enormous pressure not to repeat a mistake of taking that vote for granted, regardless of his strong African American support during the primaries.

“After declining black turnout in 2016, you might not want to test fate on that. I sure don’t want to test fate. I’ll take either,” said Gary Segura, the co-founder of the polling and research firm Latino Decisions.

Which is to say, most Hispanic activists indicated in interviews they would be more than happy if Biden ultimately settles on an African American woman, as long as a Latina is a serious part of the conversation.

It’s the choice of a white woman that would likely set off anger in some parts of minority communities.

“The bigger issue isn’t black vs. brown. A woman of colour as VP would get most women of colour motivated,” said Aimee Allison, the founder and president of She the People, a national network empowering women of color.

“My biggest concern is Joe Biden is considering a white moderate running mate like Amy Klobuchar. That would be repeating Hillary Clinton’s mistakes of 2016, the safe route,” Allison said of the Minnesota senator who ran for president this year. “She’d be a huge, horrific strategic error on the part of the Biden campaign.”