Despite virus, no change in Israel’s stand on Palestinians - GulfToday

Despite virus, no change in Israel’s stand on Palestinians 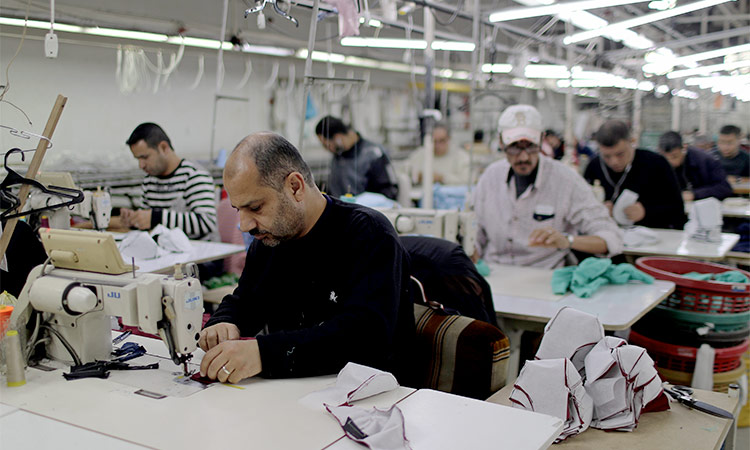 Palestinian workers make protective face masks, to be exported and sold in the local market, in a Gaza City factory. Reuters

Michael Jansen, Political Correspondent
Coronavirus has given Zionism a victory over democracy in the battle for Israel’s identity. The election of opposition Blue and White party leader Benny Gantz as interim speaker of parliament has led to cabinet formation negotiations with arch Zionist Binyamin Netanyahu.

Gantz ran on a promise of removing Netanyahu, who has been in the top job for 11 years, has been indicted for corruption, and is set to face trial. A former armed forces chief-of-staff, Gantz expects to be appointed foreign or defence minister in a new government and replace Netanyahu as prime minister in 18 months.

While Gantz deeply mistrusts Netanyahu, he justifies his capitulation by saying he seeks to do “what’s right for this country” since it is engaged in a desperate fight against the coronavirus. This decision split Blue and White. His two coalition partners accused Gantz of stealing their votes and “crawling” into a government of “extremists and extortionists.” Voters who had backed his party felt betrayed.

During the past year, Israel has had three elections. The first two were inconclusive with neither Gantz’s Blue and White nor Netanyahu’s Likud gaining the necessary majority in the Knesset to form a government. While the Lkiud won 36 seats and Blue and White 33, in the third election in March, Gantz was asked to form a government because he could muster the support of 61 of the 120 legislators.

Now fractured Blue and White comprised three disparate factions and attained its slender majority by joining with the rightist party of “never Netanyahu” Avigdor Lieberman and the Joint Arab List which represents Palestinian citizens of Israel. The list agreed to support Blue and White with the expectation that Palestinian citizens would, for the first time, have a role in government. If this had happened, this could have given Israel a limited measure of democracy.

Blue and White was always a risky vehicle to choose to deliver democracy.

While claiming to represent Israelis of all faiths, Blue and White’s pledge to continue “the establishment of “the State of Israel as a Jewish and democratic state” was conditioned by this taking place within the “light of the Zionist vision.”

If Israel is to abide by the “Zionist vision,” it cannot be democratic. Twenty per cent of  Israeli citizens are not Jewish. More if Russian Christians claiming to be Jews are considered.

Furthermore, Gantz is not the man to promote democracy in Israel. Having been military chief during Israel’s attacks on Gaza in 2012 and 2014, he is a hardliner.

He personally recommitted to the “Zionist vision” by promising to strengthen “settlement blocs” and Israel’s grip on the Golan Heights “from which we will never retreat,” and pledging that Jerusalem would remain Israel’s capital and the Jordan Valley Israel’s eastern border.  He said Palestinians living beyond Israel’s apartheid wall would not be allowed to “endanger our security and our identity as a Jewish state” although Palestinians are already the majority in the land between the Mediterranean and the Jordan river.

Gantz capitulated to Netanyuhu as Israel’s number of coronavirus cases soared to 3,460 with 12 fatalities. (Now the number is 3,619)…  Israelis were told to remain at home for seven days unless faced with emergencies.

Schools, shops, and airports were shut.  While criticised for failing to act quickly and decisively against the virus, Netanyahu’s interim government has adopted a two-track policy toward Palestinians: cooperating, on one hand, and continuing repression, on the other…

The Israeli Health Ministry has been cooperating and coordinating in a joint operations room with the Palestinian Authority with the aim of containing the spread of the virus.  When initial cases appeared in Bethlehem, the Palestinian Health Ministry asked Israel to test for infection in people exposed to the virus. The Authority imposed tight restrictions on the area and sealed it off with checkpoints manned by Palestinian police. This is the first time this has happened since the occupation.

Israel and the Authority also agreed that 40,000 West Bankers with jobs in Israel would continue working for the next two months if they lived in Israel.

This deal quickly turned sour. As employers put them in crowded, squalid sleeping accommodations, some workers fell ill and were dumped at checkpoints. At least one man collapsed and lay untended until an ambulance could reach him. He had ordinary flue rather than the virus and recovered.

When the Authority called on the workers to return home due to abuse, not all were quarantined and infected families and contacts when they reached home. In the village of Biddo, one died, and 23 cases were confirmed. The number of cases in the West Bank rose from 50-60 to 97, partly due to the return of the workers. This is a far lower figure than that in Israel. Test kits are in short supply although the World Health Organisation (WHO) has provided 3,000 kits and 50,000 masks. No ventilators have been delivered. There are more than 2.7 million Palestinians in the West Bank.

One thousand test kits, disinfectants and equipment from WHO were transferred by Israel to Gaza where two million live.  Israel holds onto all its supplies although, as occupying power, it rather than the WHO is responsible for the health of Palestinians it controls.

Israel has not halted its harsh treatment of West Bankers and has stepped up its colonisation enterprise while the world is preoccupied with the virus. Last week the Israeli army seized tents and  equipment for construction of a field clinic for testing and treating the virus at the village of Ibziq in the northern Jordan valley.

Israel seeks to annex this region which constitutes one-third of the West Bank.

Elsewhere in the valley water pumps, solar panels for electricity and spraying equipment were confiscated after the Israeli army claimed the area is a closed military zone. Israel demolished three homes in the Jericho area because they lacked building permits and seeks to seal off the Shuafat refugee camp on the edge of East Jerusalem although 70 per cent of the 100,000 residents have Jerusalem identity cards.

Israel has released 500 prisoners to house arrest but none among the 5,000 Palestinians Israel detains, including 180 children and 43 women and the 430 held without trial. Four Palestinian prisoners have tested positive.

In the time of the deadly coronavirus, the occupation rolls on as usual.

President Mahmud Abbas renewed a coronavirus lockdown in Palestinian-ruled areas of the West Bank for a further month late Monday, though some measures will be eased.