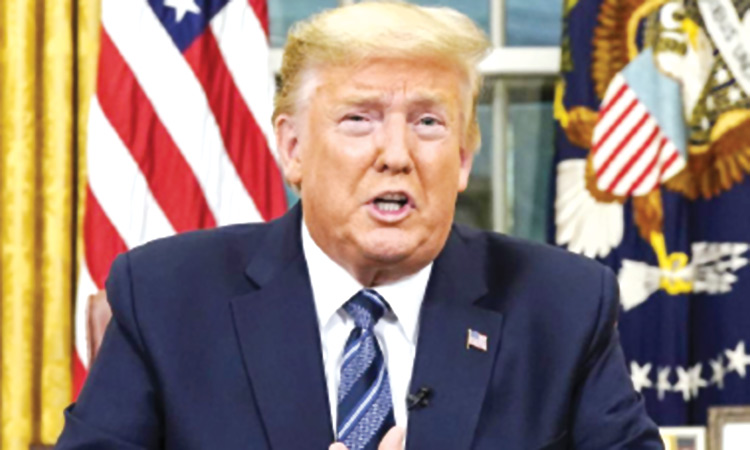 Trump’s efforts to counter the coronavirus is likely to affect views of him and his country.

The spectacular failure of the Trump administration to assert positive US leadership in the global fight against the coronavirus has followed years of US decline in international affairs.

Due to its involvement in World War II, the US emerged as the predominant power on the world stage where it was in competition with the Soviet Union and, later, China. While struggling to rebuild and recover from the devastation of the war, Western democracies were prepared to follow the US lead in trying to create a moral system based on law rather than might. The US made its commitment to a new world order in 1945 by not only promoting the creation of the United Nations, but also celebrating the signing of its charter in San Francisco and headquartering the organisation in New York City. Under the leadership of then-President Harry Truman and Secretary of State George Marshall, the US invested in the reconstruction of Europe. This outreach policy contrasted sharply with US behaviour after World War I. Although US troops, belatedly, fought and died during that conflict, its leadership reverted to isolationism and shunned the League of Nations, the body set up to promote peace among nations following that terrible conflict.

Unfortunately, after World War II the US lost moral authority and undermined the rule of law by repeatedly violating the UN Charter, which prohibits member states from interfering in others’ affairs and invading each other. Washington mounted coups in Syria in 1949 and in Iran in 1953, backed Israel’s wars of aggression from 1948-2014, waged war in Vietnam between 1955-75, used Cuban dissidents to invade Cuba in 1961, made war on Iraq in 1991 and 2003, intervened in Libya and Syria in 2011 and constantly interfered in the countries of Central and South America. Abuse of power went to the heads of Washington’s self-interested politicians who thought they had a mandate to do whatever they wished.

Reversing the downward slide to a tiny degree, the Obama administration made positive commitments when it signed onto the international accord to curb climate change and the six-member agreement limiting Iran’s nuclear programme in exchange for easing economic sanctions.

Enter Donald Trump with his complete ignorance of foreign affairs, lack of respect for international alliances, bloated ego and “America First” agenda. Since taking office in January 2017, he has finished off whatever moral authority and respect the US had enjoyed. He reneged on US commitments to cut emissions causing climate change, withdrew from the Iran nuclear deal, offended North Atlantic Treaty Organization (NATO) allies by bad-mouthing the alliance and courted the authoritarian rulers of Russia, Turkey and North Korea. Instead of negotiating with trading partners Canada and Mexico, he bullied them into capitulating to terms which he claimed benefitted the US and then touted victory over these US neighbours to his base of supporters.

He has increased the threat and use of sanctions to bully Iran and Russia and other countries and imposed tariffs to bully China. To please Israel and its US supporters, he has withheld funding for the UN Educational, Scientific and Cultural Organization after it accorded membership to Palestine and to the UN Relief and Works Agency caring for Palestinian Refugees. He has approved Britain’s destructive exit from the European Union, weakening the bloc at a time Russia and China have been asserting global influence.

While anti-US popular sentiments around the globe have waxed and waned over the decades, they have peaked since Trump took office. According to an opinion poll conducted in January, only 29 per cent of world citizens have confidence in Trump while 64 per cent do not. It is significant that his personal approval rating fell as soon as he took office, and one year later his US rating had dropped to 30 per cent, a new low. Israel, India and Nigeria are among the countries which gave him a positive rating.

Trump’s efforts to counter the coronavirus is likely to affect views of him and the world rating of the US because every person in every country has been forced to deal with the infection. The US under Trump will be judged on its ability to test for the virus and provide the public with face masks, medical staff with protective gear and ventilators for acute cases who are slowly suffocating from fluid in their lungs.

The US rate of infection and death toll will be critical in forming international opinion. Although Trump continues to fail to meet his obligations as head of state and government, he boasts about his administration’s “tremendous” efforts and achievements. His daily press briefings may have convinced around half of US citizens (a deluded 40-55 per cent in the latest polls) that he is doing a good job, but will not reassure people elsewhere.

As the US is scrambling to acquire tests, protective clothing and equipment to tackle the virus, its global rivals China and Russia are providing aid to Europe, this region and elsewhere. Cuba has sent a team of 50 doctors to plague-ridden Italy. While it cannot deliver, the US has offered help to longstanding antagonists North Korea, which has not admitted infection, and Iran, which rejected the US proposal as Washington clamped down fresh sanctions that prevent Tehran from acquiring the medical tools to rout the infection.

Instead of taking charge of US efforts to secure what is needed from foreign firms, the Trump administration has urged state governors to do this job, making them compete against one another. To make matters worse, Trump insulted Beijing by dubbing the infection a “Chinese virus.” Although he was correct in saying that it originated in and spread from China, the US depends on China for 80-85 per cent of its medications and raw materials to make medications.

People expect the US to contain and, ultimately, defeat the contagion, thereby preventing it from continuing to spread outside its borders. The US is, after all, the world’s richest country with the largest economy and a high if not the highest per capita income. The US touts itself as the “greatest” and is widely seen as the world’s most powerful country, but it cannot deliver in the current crisis. If Trump fails to suppress the infection and it runs riot across the country, the US will become the major failed state in a world of failing states.

"The two leaders discussed the need to eliminate foreign interference and maintain the ceasefire in Libya. The leaders agreed that the violence being carried out in Idlib, Syria must stop," White House spokesman Judd Deere said in a tweet.