‘Virus diplomacy’ by US, Iran can help save Iranian lives - GulfToday

‘Virus diplomacy’ by US, Iran can help save Iranian lives 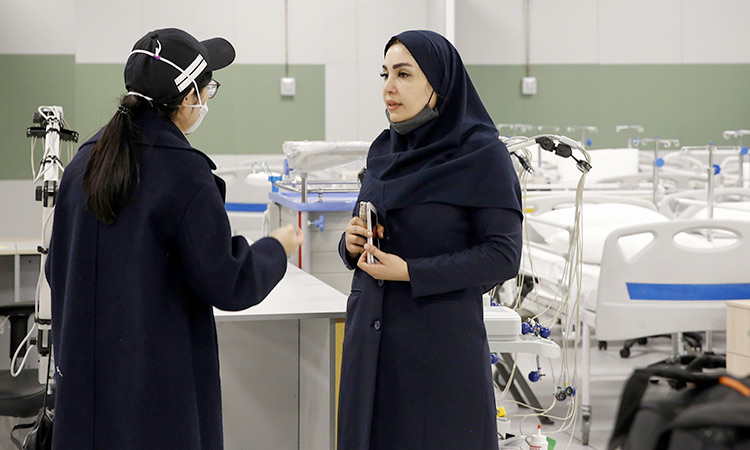 An Iranian health inspector checks a makeshift hospital set up inside the Iran Mall, northwest of Tehran, amid the coronavirus outbreak. Agence France-Presse

The United Arab Emirates, Kuwait and Qatar have wisely sent aid to Iran, this region’s coronavirus hub.  ‘Wisely’ is the operative word because urgent action is essential for the health of these countries and the globe. Although the virus has already spread from Iran to neighbours and, even, further afield, if it is not contained and ultimately eliminated in Iran, it could continually export contagion, preventing recovery across the region and further afield.

The UAE’s provision of gloves, surgical masks, and protective equipment will save lives and, hopefully, help Iran deal with the crisis. Kuwait has donated $10 million while Qatar has also sent masks and hygiene products.

Arab generosity toward a rival contrasts sharply with the cruel “America First” line adopted by the Trump administration which all too clearly seeks to exploit the deadly virus to exert political leverage on Iran. Hardline Secretary of State Mike Pompeo told the WHO the US is prepared to deliver assistance but appeared to link this to the release by Iran of US prisoners.

A desperate Iran responded with a positive gesture. It freed on medical furlough ex-Navy officer Michael White without giving him permission to leave the country. Three other dual US-Iranian citizens remain in prison and one is missing in Iran. White is in the custody of Tehran’s Swiss embassy, which looks after US affairs in Iran. As he has exhibited symptoms of the virus, he is under observation.

The temporary release of White followed the ramping up by the Trump administration of sanctions which, by depriving Iran of modest earnings from the sale of petrochemical products, can only impede Iran’s struggle against the virus. Five of the firms targeted this time round are based in the UAE. They have been blacklisted for buying “hundreds of thousands of metric tons of… products from the  Iranian National Oil Company,” the US Treasury stated, alleging that earnings were used to  fund Iran’s regional policies. In contradictory mode, Treasury Secretary Steven Mnuchin falsely claimed that the administration “remains committed to facilitating humanitarian grade and assistance in support of the Iranian people.”

Donald Trump has resisted calls from Britain, France and other allies to relent on sanctions. US experts and former diplomats have urged the US and Tehran to engage in “virus diplomacy” which could alleviate the destructive impacts of sanctions and save Iranian lives. He has refused to follow the examples of his predecessors George W. Bush in 2003 and Barack Obama in 2012 who eased sanctions to expedite delivery of humanitarian aid after Iran was struck by devastating earthquakes which killed thousands.

Sanctions were re-imposed and tightened after Trump withdrew the US from the agreement for dismantling Iran’s nuclear programme in exchange for lifting sanctions. The sanctions regime is not, in theory, supposed to prevent Iran from purchasing and importing humanitarian supplies. Indeed, such action is prohibited as it would be a crime against humanity and (economic) war crime.

In practice, the US blocks Iranian access to all goods and services by blacklisting and imposing financial punishment on governments, companies, and individuals doing business with Iran. Human Rights Watch has said the result “has been to deny Iranians access to essential medicines and to impair their right to health.”

The latest round of US sanctions was announced shortly after Iran’s foreign minister Mohammed Javad Zarif sent a letter to UN Secretary General Antonio Guterres, asking for the lifting of US sanctions on the ground that Iran cannot import the medical supplies and equipment needed to deal with the virus.  Iran’s Central Bank has applied for the first time in 60 years for an International Monetary Fund (IMF) loan of $5 billion to secure essentials. Since the US is on the IMF’s board, the Trump administration is likely to deny the request.

Trump is determined to keep on punishing the Iranian people in order to weaken their government and, ultimately, topple it. His so far failed maximum pressure” campaign has been designed to accomplish this goal. He sees the ravages of the coronavirus as a new tool in his kit, perhaps even the winning tool.

He cares little or nothing about Iran’s more than 80 million people.

Furthermore, he is determined to strike at Iran for attacks on Iraqi military bases hosting US troops. He and his aides blame these strikes on pro-Iranian militias whether they are involved or not. Pompeo and National Security Adviser Robert O’Brien have urged military action while the Pentagon has called for restraint, so far. Military attacks while Iran is fighting the virus would be foolhardy.

On the US domestic front, Trump seeks to exploit residual anti-Iran feeling caused by the 1979-81 crisis over the holding by Iranian students of US diplomats and staff at the embassy in Tehran. He is in an election year and wants to show his base of supporters that he means business when he speaks of taming Iran by forcing Tehran to accept his demands.

Trump also seeks to court the hardline US pro-Israel lobby and wealthy and powerful individuals who contribute to his and Republican party election campaigns.

Although sanctions have degraded Iran’s health care system, local authorities and the government are to blame for the virus surge. Tehran does not want to hold Beijing responsible for introducing the infection in Qom, Tehran and Isfahan where Chinese engineers and workmen are employed on major infrastructure projects. China has bucked US sanctions to ally itself with Iran.

Once cases were found in the Shia holy city of Qom, pilgrims visiting its shrine should have been scanned and quarantined if they showed symptoms.

Local administrators should have sealed off the city. Instead the faithful, told by clerics they would be safe, continued to visit and the virus spread. Like Washington, Tehran initially denied there was an epidemic. Valuable time has been lost.  When mass infection was finally addressed, President Hassan Rouhani and the Revolutionary Guards vied for management, undermining the response.  Consequently, the prospects for containment are poor. This is why Iran’s wise neighbours and sensible powers outside the region must give Iran all the help it needs to conquer the virus. It menaces us all.