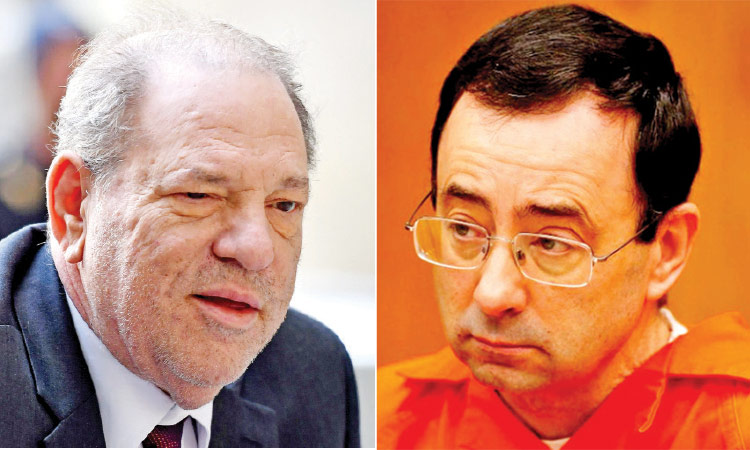 Weinstein, the disgraced movie mogul and leering face of everything #MeToo set out to dismantle, was sentenced to 23 years in prison. He was convicted of two felony sex crimes last month and faced a minimum sentence of five years and a maximum of 29 years.

Weinstein is 67. Twenty-three years in prison would put him at 92. I don’t find joy in the prospect of him suffering through his final days in captivity, but I do think a more than two-decade sentence sends a message that serial sexual predation will not be taken lightly, even when the predator has fame and fortune on his side.

“Every argument that could’ve been made on his behalf was made,” Manhattan Assistant District Attorney Joan Illuzzi said in court. “And the system worked.”

She gave credit to Weinstein accusers, two of whom delivered victim impact statements before the judge sentenced Weinstein.

“The defendant would never have been stopped from hurting and destroying more lives,” Illuzzi said. “Every one of these women represents the strength and fortitude of every moral person who stands up and says, ‘Enough.’”

Enough from Weinstein. Enough turning a blind eye to the sort of harassment and abuse and dehumanizing that felt, for far too long, in far too many industries, routine. Par for the course.

If not for the Weinstein story opening the #MeToo floodgates, we may never have learned about rape allegations against Matt Lauer. R. Kelly’s multiple accusers may have continued to toil in obscurity. Larry Nasser’s victims may still be waiting for a grown-up to take them seriously.

Weinstein offered his own take.

“We may have different truths,” he told his accusers in court. “But I have remorse for all of you and for all the men going through this crisis.”

Before the sentence was announced, he told the court, “I am totally confused.”

“I think men are confused about all of this,” he said, “this feeling of thousands of men and women who are losing due process. I’m worried about this country. This is not the right atmosphere in the United States of America.”

Due process affords you the right to a fair trial. It doesn’t guarantee you’ll be happy about the outcome.

But Weinstein is still trying to paint himself as the poster boy for political correctness run amok. Life as he knew it is over. But maybe, he supposes, life as a martyr is just beginning.

It’s not going to fly.

“The Weinstein sentence reminds us of the importance of those sources and of leaders at news organizations who refused to kill the story — including the editors at the New Yorker who published the first allegations of rape and assault about Weinstein,” journalist Ronan Farrow tweeted last Wednesday. “In a letter to the judge this week, Weinstein’s attorneys said that reporting ‘destroyed’ his life. In fact, it fairly parsed a mountain of evidence suggesting Weinstein’s actions accomplished that.”