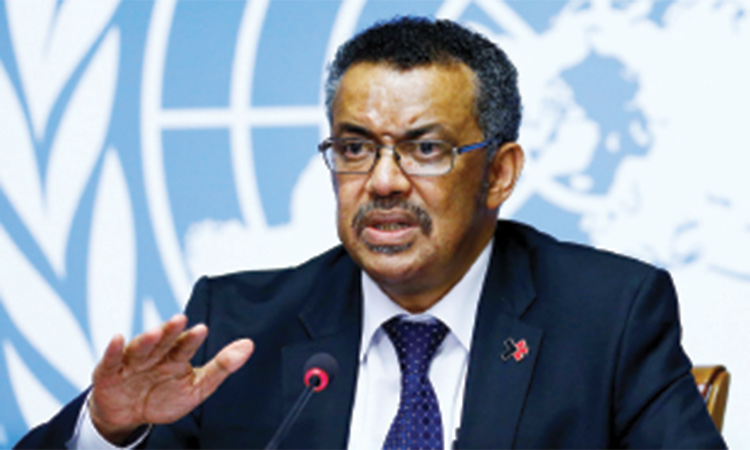 WHO Director Dr Tedros Adhanom has steered clear of the “pandemic” label to reassure millions of frightened people.

World Health Organisation Director Dr Tedros Adhanom is the focus of attention as the 2019 novel coronavirus advances across the globe. He has been criticised by some health professionals for hesitating to call the rapidly spreading disease a “pandemic,” the most serious term for such a process, because many countries have few cases.

Criticism is not his only problem. He also has to deal with governments practicing denial and deceit as well as blame games, conspiracy theories and alarmist and false reports in the media. Finally, he has to reassure millions of frightened people. This may be why he has steered clear of the “pandemic” label.

THE VIRUS. Dubbed COVID-19, the virus is “novel” because it is new and unknown. It resembles the common cold and the winter flu virus. It can infect a victim without displaying symptoms or emerge with fever and a dry cough, proceed to the lungs, and, in a minority of cases, cause organ failure and death. The virus is unpredictable: it can be infectious in two days or 14 and is known to recur in patients thought to be cured. The virus may exist in two strains, one mild, the other virulent. The death rate is lower than that from two other coronaviruses, SARS, which originated in China, and MERS, which appeared in Saudi Arabia. These viruses jump from animals to humans, spread from human to human and infect communities large and small. So far, about half of those infected by COVID-19 have recovered and the majority are on their way to recovery.

The first person to be infected in early or mid-December is said to have been a customer at a market in the Chinese city of Wuhan where live and dead animals were on sale alongside fish. The original host is believed to have been bats that may have infected chickens or wild animals found at the market.

DENIAL. The first reaction of the Chinese authorities to the virus was to stifle a whistleblower. Li Wenliang, a doctor working at Wuhan Central Hospital, warned colleagues about the virus which had appeared in early December, but he was accused by the police of “making false statements.” Time was lost before the virus was identified and tackled. He was infected and died in early February.

On Dec.31, China finally alerted the World Health Organisation (WHO) that an unknown virus had appeared. The virus was identified a week later and on Jan.13 WHO reported a case in Thailand in a woman who had travelled from Wuhan. Japan announced the second case of international spread. Confirmed cases appeared across the globe, Italy became a hub for the spread of infection in Europe and Iran in this region. The WHO declared a global health emergency.

Italy took drastic measures, quarantining entire northern cities, provinces and, this week, the entire country, but could not prevent visitors from carrying the virus abroad. Iran’s denial enabled the virus to spread rapidly throughout the country and into neighbouring countries. Japanese Prime Minister Shinzo Abe has been criticised for failing to tackle an outbreak on a cruise ship which enabled the virus to spread. Belatedly, he imposed a 14-day quarantine on visitors from infected China and South Korea.

The US initially adopted a policy of denial as the current occupant of the White House Donald Trump feared an epidemic would harm his changes of being re-elected in November. While medical professionals have repeatedly pressed the government to act in order to contain the outbreak, Trump has refused to accept the severity of the outbreak and tried to blame the failure of the US health authorities to address the virus on his predecessor Barack Obama. Trump’s reaction was typical of a man who denies manmade climate change. He became the main source of disinformation in the country. Trump’s prevarication and inaction delayed the US campaign to tackle the virus by two months.

His administration did not promote the rapid production of kits to test for the virus. US-made kits were found to be defective. Until the end of February virus testing was restricted to small numbers of people arriving in the US from China or who had come in contact with a known case. Only a few hundred people have been tested so far as compared with tens of thousands elsewhere. Nevertheless, Trump has said, “Anybody who wants a test will get a test, that’s the bottom line” and claimed the US testing kits are nearly “perfect.” Ironically, he refuses to be tested although he has come into direct contact with at least three people who may have the virus.

Trump initially wanted to allocate $1.2 billion (Dhs4.4b) to fight the virus, but was compelled by Congress to agree to $8.3b (Dhs30.5b). The delay in funding federal, state and local agencies has denied researchers funds to conduct tests and develop treatments and vaccines. To make matters worse there are shortages of surgical masks, protective suiting for doctors and nurses treating patients, respirators needed for serious cases and other sterile material and equipment.

Seeking to shift blame while struggling to contain the virus, governments are resorting to blaming others. Saudi Arabia, for example, has blamed regional rival Iran, while an Iranian official suggested that the epidemic has been caused by US biological weapons. Various conspiracy theories circulate on the worldwide web while irresponsible media cook up horror stories to mislead or frighten the public.

The WHO chief Dr Tedros says it is “not a time for excuses... This epidemic can be pushed back, but only with a collective, coordinated and comprehensive approach that engaged the entire machinery of government.” WHO director since July 2017, he served as head of the Global Fund to Fight AIDS, Tuberculosis and Malaria, and as minister of health in his own country, Ethiopia, where he successfully reduced infection of these three diseases. As the first African to head the WHO, he has a wealth of experience in dealing with health emergencies, including highly contagious Ebola in the Democratic Republic of Congo.

Born in 1965 in Asmara, Eritrea, he received a Bachelor of Science degree from the University of Asmara, a Master of Science degree in immunology of infectious diseases from the London Schools of Hygiene and Tropical Medicine and a PhD in Community Health from the University of Nottingham. He argues, “All roads should lead to universal health coverage,” and has pledged to work towards that goal as head of the WHO.