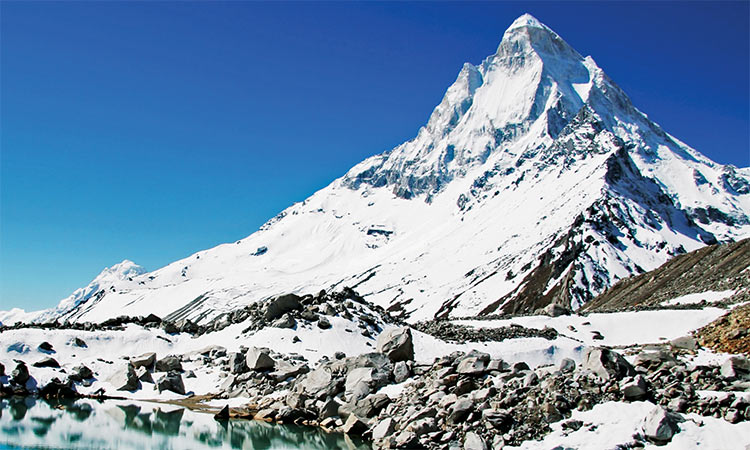 According to an Indian Ministry of Science & Technology notification, the already receding Gangotri glacier is in danger.  Black carbon concentration in the region increases by 400 times during summer, according to a study. The study suggests agricultural burning and forest fires as the reason behind this seasonal increase. This can trigger glacial melt because of the light-absorbing nature of black carbon.

Scientists from Wadia Institute of Himalayan Geology conducted research at the Chirbasa station near the glacier for 2016 and found that black carbon (BC) concentration in this region has changed drastically during summer. The research was published in the scientific journal ‘Atmospheric Environment’.

It was revealed by investigating the occasional high values of black carbon extricated, that the seasonal cycle of increase was significantly influenced by the emissions resulting from agriculture burning (in western part of the country), forest fires (along the Himalayan slopes) in summer, and to some extent by the contribution from long-range transport of pollutants in winter, depending the prevailing meteorological conditions. According to the study, both these activities undergo a spike during summer – the former due to farmers’ practice of burning crop residue to prepare their field for seeding the next season, and the latter because forests get littered with dry components that ignite by the slightest of sparks.

Located in the Uttarkashi District of Uttarakhand, this glacier is not only among the largest in the Himalayas, but also one of the primary sources of water for river Ganga. Moreover, it is a pilgrimage site and also popular with trekkers. The glacier has faced constant threat of excessive melting, as global warming continues unabated.

The equivalent black carbon aerosols contribute significantly towards global warming due to its light-absorbing nature. Their presence in the eco-sensitive zone, such as the Himalayan glacier valleys, is a matter of serious concern and needs to be meticulously monitored. However, baseline data on BC is rarely available from most of the glaciated Himalayan region. For the first time, these scientists carried out measurements and found that the monthly mean concentration of EBC was found to be minimum in August and maximum in the month of May.

A commentary by the Weather Channel adds that the melting of Gangotri could lead to enormous short- as well as long-term consequences for the entire country. The immediate effect of the melting is likely to be in the form of floods, as glacial melt will lead to the accumulation of excess water in glacial lakes. Flooding of such lakes, along with rivers and other reservoirs, could wreak havoc in multiple north Indian states. Such intense inundation will not only damage the environment, but also force the regional residents to migrate southward.

It points out that droughts will also set in due to the disappearance of the water source, which could further pose severe challenges to water and food security in the region. Ganga’s stream would possibly narrow down, and the river may very well become a seasonal one. Its basins could also undergo desertification due to the lack of water year-round, causing great harm to flora, fauna and human settlements that dwell around the river.

Studies show that melting of glaciers has steadily become a common trend around the globe, with more and more cases being reported as climate change continues. The commentary highlights that just last year, in July 2019 (the hottest July on record so far), the Arctic sea ice reached a historic low, with that month’s average falling 19.8% below the long-term average. Climate change and abnormal weather patterns also caused unprecedented melting in Greenland last year, as the island’s ice sheet melted six times faster than it did back in the 1980s.

As for this year, nine days of abnormally high temperatures in early February resulted in extremely rapid ice melting Antarctica, with one of its islands losing as much as 20% of ice. On February 6, 2020, Antarctica also experienced its hottest temperature on record.

Closer to home, the Hindu-Kush Himalayan glaciers, which are the biggest source of river water for over 1.3 billion people in India and seven other countries, are also projected to decline by up to 90% through the 21st century. Now, with Gangotri also on the verge of facing a major melt threat in the approaching summer months, record melt figures and temperatures in the region may not be too far-fetched a possibility.