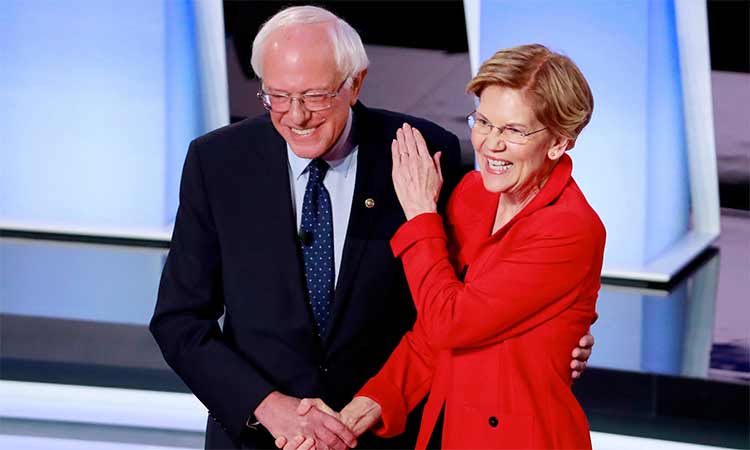 “Don’t tell me this isn’t about sexism,” is what at least one feminist writer has said about Elizabeth Warren’s failure to win the Democratic nomination.

Apologies in advance for mansplaining, but it isn’t about sexism. Warren didn’t lose; she ran a good race, much better than many other men and women in the field. She lasted longer, and was much more successful in setting the terms of the debate.

But ultimately she couldn’t out-Sanders Sanders.

Not that she was trying, exactly. She offered herself as the more responsible, detail-oriented revolutionary. That sounds neat to a policy wonk, but revolutionaries aren’t really looking for road maps. They want to hear clarion calls. Long is the list of people with the lengthiest plans on their websites who never come close to winning the nomination.

And while many college-educated voters admired the fluent way Warren could explain her novel wealth tax and her plans for breaking up big tech and restructuring American corporations, it’s rare that American politics rewards true policy creativity, whether it comes from a man or a woman. (Trump’s campaign calls for a Muslim ban and a border wall are rare and depressing counterexamples.)

If Warren wasn’t the radical, she wasn’t trying to be the steady, incrementalist moderate, either, which left her stuck in the middle of the left, claiming she was the only one who could unify disparate strands of the party. Which was kind of also Pete Buttigieg’s message, and he also didn’t make it that far.

I was personally impressed by Warren’s debating skills and by her winning demeanour on the stump. She’s amazingly smart, a very good communicator. She is sharp on the attack (not only against Mike Bloomberg) and has a John McCain-like way of disagreeing without seeming profoundly disagreeable. She seems to love the fight and be rooted firmly in real people’s struggles. The detail she offered on her policy plans is admirable.

But every politician who has strengths also has weaknesses, and those weaknesses are usually funhouse-mirror versions of their strengths. Warren got all tied up around the details she offered or failed to offer on “Medicare for All.” First, there was no price tag. Then, there was a price tag. Then, there was a transition plan that seemed to validate the arguments of many who criticize single-payer itself. What came through was a muddle on the policy centerpiece of her campaign.

To the extent electability is the thing understandably on everyone’s minds these days: Every candidate in the Democratic field has advantages and vulnerabilities in a head-to-head matchup with Donald Trump. If we’re going to ascribe Warren’s failure to win the nomination to sexism, we’d be calling lots of Democratic women in early voting states sexist. Warren finished third among women in Iowa, and fourth among women in New Hampshire. She didn’t win her home state of Massachusetts or her original home state of Oklahoma.

Only a fool would claim sexism has no role in influencing how the electorate looks at female candidates. Of course it does, especially in runs for president: Some share of the population is uncomfortable with a woman as our commander in chief. Plenty of critiques of women would never be levelled at men.

But only another type of fool blames sexism every time a talented but flawed female candidate doesn’t make it across the finish line with the trophy in her hand.