He built a life in the US. In death, he chose Mexico - GulfToday

He built a life in the US. In death, he chose Mexico 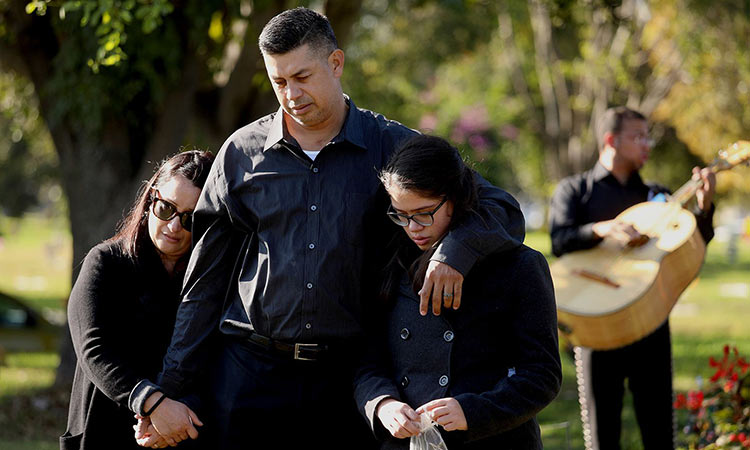 Jesus Tovar Sanchez was 27 when he and a cousin left Mexico for the United States, soon followed by his wife. Over the next 40 years, Tovar rose from dishwasher to owner of a radiator company, bought a house in the San Gabriel Valley, raised five sons and a daughter, and became a US citizen.

But as immersed as he was in his new country, it was not where he wanted to be in the end. “When God takes me, he should take me to Guadalajara,” he said in April. “That’s my wish.”

He was 74, suffering from advanced kidney disease and thinking about whether his children would honour that desire. “I’m not sure what will happen because my family is here,” he said. “If God calls me, I don’t know if they will take me there or if I will stay here.”

In a world in which international borders are often crossed as people flee war or poverty in search of peace or opportunity, the question of where is home has become increasingly muddled. Perhaps the best answer is the ultimate one: Home is the ground 6 feet above us.

Each year roughly 175,000 Mexicans move to the United States, according to the Pew Research Centre. And each year thousands of bodies and cremated remains are shipped back to Mexico

It wasn’t until Tovar and his wife, Rosario, had been in California for about two decades that they decided to settle there for good. In a sign of their commitment, they purchased a two-person mausoleum at a Los Angeles cemetery.

“We said if we’re going to stay here, we’ll need the basic needs — that’s having a house and a final resting place,” she said. But after his mother died in 2002, Tovar realized he wanted to be buried next to her — in Mexico.

Josefina Sanchez Pelayo had raised him and his six siblings in poverty after their father’s death, and though Tovar was her only child to settle outside Mexico, the two remained close. He and Rosario would load the family into the car each December, tie a grill to the roof and drive to Mexico to visit.

As Tovar’s own health took a precipitous decline last year, his children began to prepare for the end. They raised $3,000 to help cover the eventual cost of shipping his body to Mexico and other expenses.

On a trip last spring to Guadalajara, Tovar handed an envelope full of cash to a niece, who assured him that there would be space next to his mother. “I relaxed a bit,” Tovar said after returning from the trip. “I didn’t feel sad. Instead, it gave me courage.”

The dream to return to one’s roots — even in death — comes from deep in Mexican culture and is embodied in the popular song “Mexico Lindo y Querido.” Mexico beautiful and beloved, if I die far from you, let them say that I am asleep and let them bring me here.

“There’s a lot of love for the motherland,” said Angel Priante, general manager of Recinto de la Esperanza, the funeral home in Guadalajara that had agreed to handle Tovar’s body when the time came.

“They go to the United States for the economy, to discover a new place,” he said. “But in the end, the love for the motherland, for their family — because they left by themselves — makes them return.”

The more than 11 million Mexican immigrants in the United States have maintained deep ties to their homeland. They send back tens of billions of dollars a year to support relatives, join “hometown clubs” and often plan retirements in Mexico.

For those who don’t make it back in life, there’s always death.

The Mexican government does not publish comprehensive data on remains sent from abroad. But the consulate that authorizes all such shipments from Los Angeles County provided statistics showing that over the last five years it approved transport for 6,740 bodies or sets of cremains.

Adrian Felix, a professor of ethnic studies at UC Riverside, said the desire to be buried back home can reflect the extent to which migrants feel seen as outsiders. “If migrants don’t feel like they’re welcome, if they don’t feel like they fully belong, they will retain their connection to the community of origin,” he said.

The Mexican government offers up to $1,550 in financial aid for its citizens to be returned to Mexico for burial. Still, many families take out loans or sell off possessions to cover the full cost, said Felipe Carrera, an official at the Mexican Consulate in Los Angeles.

“It’s very hard for a family not to grant that last wish, so they make a series of sacrifices,” he said.

The question of where to spend eternity can be fraught for families. Zacarias Gomez spent his life as a farmworker moving between California and the central Mexican state of Zacatecas, where he owned a cattle ranch and the cemetery plot he hoped to occupy one day.

Hospitalized with prostate cancer in Orange County, he would point to the television every time an airplane appeared on the screen and tell his son Lupe that he wanted to go home. “He wanted to just get up from the bed,” Lupe recalled. “He would say, ‘Let’s go to Zacatecas, my son.’ He was on medicine, but his love for his native land was until the end of his life.”

Lupe later bought spaces at the same cemetery for himself, his wife and their five children.

Some find more creative arrangements. After the balladeer superstar Jose Jose died in September at age 71, half his ashes remained in Miami, his adopted hometown. The other half were shipped to Mexico City for a tribute at the Palace of Fine Arts and then paraded through his old neighborhood before being buried next to his mother.

He wanted “the half that remained in Mexico to represent where he was born, where he grew up, where Mexico saw him flourish,” his daughter, Sara Sosa, told Univision shortly after his death. “The other half in Miami, the city that accepted him, that helped him be reborn, to escape his addictions, (where) he met my mother.”

Last Dec. 2, Tovar was propped up in a hospital bed in West Covina. He knew the end was near. He died at 9:37 p.m. the next day, less than five months shy of his 75th birthday.

More than 100 people filed past his open casket at a wake five days later at Guerra & Gutierrez Mortuary in East Los Angeles. Maria Pena de Jimenez, a close friend from Tovar’s tiny hometown of Mascota, sat on a bench and video-chatted with his brother Hugo in Mexico.

“We see a sense of peace on his face,” she assured him. For the next 12 days, his body remained at the funeral home while his family searched for flights and gathered paperwork for the journey to Mexico.

His children began arriving in Guadalajara a couple of days before his casket was scheduled to get there. It seemed so ironic to 38-year-old Kenia: Her father had to sneak across the border to reach the United States all those years ago, and now his family was struggling to get him out.