The 2020 race could become the coronavirus election - GulfToday

The 2020 race could become the coronavirus election 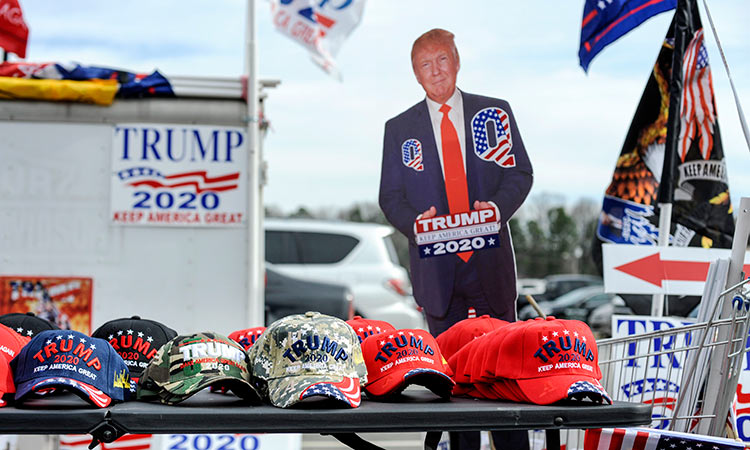 It’s hard to run an election during a pandemic, let alone stay healthy.

In 1918, as Spanish influenza wreaked havoc in one of the greatest health disasters in US history, politicians were sidelined as bans on public gatherings made it impossible to hold campaign rallies.

There was no vaccine for that virus, which killed hundreds of thousands of Americans, and the best officials could do was keep people away from each other to limit the microbe’s spread. Voters in that year’s midterm election headed to the polling booths in masks for fear that a simple act of civic participation could be deadly.

And for good reason: In Wayne, Neb., officials lifted a public-gathering ban five days before the election, allowing a flurry of last-minute campaigning — which also coincided with a rise in deadly infections.

Now, for the first time in a century, a US election faces the unusual threat of being upended by a potential pandemic as a new coronavirus has shocked the global economy, tested President Donald Trump’s administration and fuelled Democratic attacks on both his leadership and the private health care system’s ability to protect all Americans.

Should the virus spread, experts are also raising concerns over Americans’ ability to participate in the political process should the nation undertake the kind of isolation measures that could make it more difficult to hold campaign rallies, nominating conventions and in-person balloting.

Business leaders are already cancelling large conferences as a preventative matter, and American health officials are warning that disruption to daily life could be “severe,” raising questions about a pandemic’s potential impact on the nation’s democracy.

“If we’re unfortunate enough that the virus becomes prevalent in the United States, it could affect both campaigns and the election itself potentially, and affect how campaigns are run, affect who turns out to vote, and potentially affect even the outcome of the election,” said Richard Hasen, a professor specializing in election law at the University of California, Irvine School of Law.

In the best-case scenario, the one still hoped for by American health officials, the virus’ march can be stopped, or at least slowed long enough for the development of an effective vaccine, which would likely take more than a year.

That would allow Americans to carry on with their lives and limit the damage to the domestic economy from the drastic isolation measures taken by China and other nations. It would prevent deaths and, as a political bonus to Trump, boost his argument for reelection.

“Because of all we’ve done, the risk to the American people remains very low,” Trump said at a news conference with medical experts at the White House, who nonetheless warned that the virus’ trajectory in the US was “uncertain” and that they were bracing for more cases.

But as evidence emerges that the virus may have gained a toehold inside the US in addition to other countries, Democratic candidates have slammed Trump’s sunny outlook on containment, while also arguing that the patchwork, costly nature of the nation’s private health care system poses a threat to the country’s ability to manage a deadly pandemic.

“We need a president who does not play politics with our health and national security,” Democratic front-runner Sen. Bernie Sanders of Vermont said in a statement Thursday. He urged support for his “Medicare for All” plan to create a national health care system “so everyone can see a doctor or get a vaccine for free.”

As stories circulate of some coronavirus tests costing as much as $1,400, Pete Buttigieg, the former mayor of South Bend said that insurance costs and coverage barriers could “get in the way of the opportunity to delay the spread of infection.”

Sen. Elizabeth Warren of Massachusetts has attacked the administration’s “outrageous” refusal to promise a coronavirus vaccine would be affordable for all Americans.

In a USA Today op-ed, former Vice President Joe Biden slammed Trump’s attempted budget cuts to national health and disease-prevention agencies, which Congress has ignored by instead boosting financing for the National Institutes of Health and the Centers for Disease Control and Prevention.

A pandemic poses a unique threat to the political process. Unlike an earthquake or a terrorist attack, a pandemic is not an unforeseeable event, potentially giving officials weeks or even months to prepare. A World Health Organization official on Friday declined to call the coronavirus outbreak a pandemic, but scientists have previously said it could reach that level.

Political conventions could pose a particular risk for the spread of a virus; it’s happened before. In 2016, California Republicans had to be quarantined in their hotel rooms in Ohio after suffering from an outbreak of norovirus. Health and party officials are already monitoring the potential impact to this summer’s Democratic National Convention in Milwaukee; Wisconsin has seen one confirmed case of coronavirus.

“Our No. 1 concern is to ensure all eligible voters are able to make their voices heard without jeopardizing anyone’s health and safety,” said Maya Hixson, spokeswoman for the Democratic National Committee. “We will continue to closely monitor as the situation develops.”

The Wisconsin Department of Health Services is uncertain about the virus’s potential trend in the state by July, but it said it will take the advice of the Centers for Disease Control and Prevention “to keep Wisconsinites and our visitors safe and health,” said spokeswoman Jennifer Miller.

Unlike other potential election emergencies, a pandemic could affect the entire country, throwing the nation’s system of locally managed elections and their protocols under harsh strain. Voting experts are calling for election officials to make pandemic contingency plans now, rather than waiting to see the progress of the virus.

“You could have 50 states simultaneously all being impacted” in a pandemic, said Michael Morley, an assistant professor of law at Florida State University College of Law who specializes in election law. He warned that the legal complexities of such a scenario could be unprecedented.

According to the most recently available research from the National Conference of State Legislatures, “At least 45 states have statutes that deal with Election Day emergencies in some way, though there is little consistency between states on what events would be covered and exactly what plans will be followed in each emergency.”

Morley said local officials should start planning now, getting rules in place “before the emergency hits. The last thing you want is government officials, many of whom themselves are elected officials, trying to make up the rules for an election in the middle of an ongoing election.”

But the National Association of State Election Directors, a group that represents election officials, was mum when asked if it was examining the issue of administering elections during a pandemic.