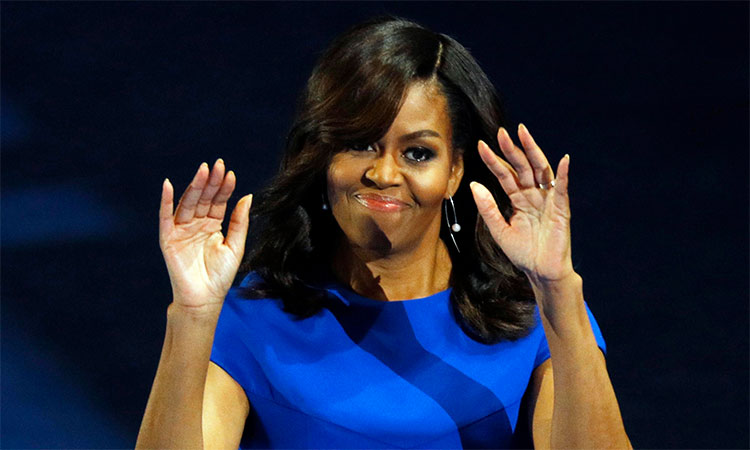 The Obamas have acted like a comfort blanket for the American left — and much of the rest of the world — since Donald Trump was elevated to the White House in 2016.

From comparing every statement from the couple to those from the 45th president, to pining for the way Barack dealt with world leaders, nostalgia has held sway. So it is little wonder that there is talk of Michelle Obama being involved in the Democratic ticket for the presidential election later this year.

With personal poll ratings that would make Trump blush — YouGov puts the former first lady at 57 per cent approval — and near-universal name recognition, there are plenty of reasons why officials, politicians and voters alike would be tempted to mention her name.

Not least because words associated with Obama by those polled include “intelligent, likeable, genuine” and “stands up for other people”. Compared to the dreaded word “socialist” that is attached to Bernie Sanders — which has got party officials worried – she seems like a safe option.

Mark Hamill certainly thinks so, having tweeted that he hopes whoever wins the Democratic party nomination considers Obama to be their running mate. But there are three main problems with the push to include Michelle on the ticket, no matter how tempting the thought might be.

The first, and seemingly most crucial is that Obama has made very clear, numerous times, that she is not interested in returning to the White House. On Jimmy Kimmel Live in 2018, the chat-show host asked her whether anyone “has seriously approached you and tried to convince you to run for office?”

“All the time,” Obama said. “But I’ve never had any serious conversations with anyone about it because it’s not something I’m interested in or would ever do. Ever.” There has been no backtrack from that stance; there have been no coy interviews intimating that she would if she was asked in just the right way; there have been no coded messages in opinion pieces issued as “come and get me” pleas. Indeed, the Obamas as a whole have sought to stay out of the Democratic primary, even with Barack’s old VP, Joe Biden, running for the nomination.

Further, does America really need another family dynasty? I know we all love the idea of them — and there are certainly far worse families than the Obamas to guard over the national interest — but it would continue the status quo. Would Sasha and Malia be next to be called upon by the party to serve their country?

The bigger risk to the Democrats is that in failing to get behind one candidate — one that is already out in the field doing the hard campaign yards — they will do nothing more than hand the keys to the White House back to Trump for four more years. Nothing says a party is in disarray more than having to parachute in a candidate at the last minute. And which family would do more to galvanise Trump’s supporters to head to the polls than the Obamas? Trump has all the benefits of incumbency, no challenger, a united party and plenty of time to build a campaign that can win.

Having Michelle Obama on the ticket is a pipe dream, we all know that. The reality is that the Democrats have made their bed and have to lie in it. It doesn’t matter which candidate comes out victorious from the nomination process, the party has to get behind them.

The Obamas have a part to play in that — but the party should be talking about the future, not the past.