How Bernie Sanders can appeal to Democrats - GulfToday 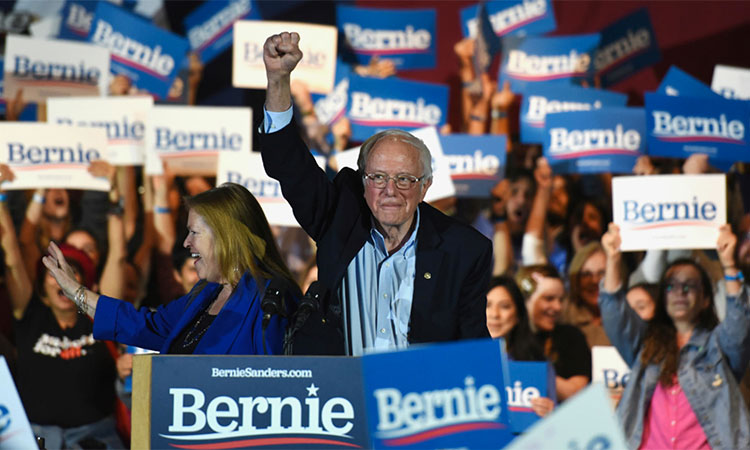 As a Warren supporter, I have mixed feelings about Sanders’ success. He was not my first choice for president. I have concerns about his approach and some of his priorities. On the other hand, and to put it mildly, I much prefer him to the current occupant of the White House. I am not 100 per cent enthusiastic about a Sanders candidacy, but I would like to be, given the alternative.

So what can Sanders do to appeal to Democrats who didn’t embrace him in the primary, but who are looking for ways to be excited about him in the general?  Here are five suggestions.

Sanders has caucused with Democrats in Congress for almost two decades, but he’s technically served Vermont as an Independent, rather than as a member of the Democratic Party. He often lambasts both Republicans and Democrats as part of a monolithic wealthy political establishment. He presents his own voters as good working class populists, while painting those who work against him as corrupt shills for corporate interests.

This rhetoric fires up Sanders’ core voters. But those who think someone else has a better healthcare plan, or better immigration policy, or who are put off by Sanders’ past record on gun control, understandably bristle when they’re painted as wealthy jerks. For that matter, many Democrats identify with their party, and are proud of its accomplishments in expanding healthcare or fighting for abortion rights. Sanders could do a lot to bring such people into his coalition if he’d just stop insulting them.

Sanders’ most aggressive supporters could help by ratcheting down the friendly fire as well. Attacking unions which don’t endorse Sanders, or rushing to yell at people who support other candidates on social media, doesn’t make people feel welcome. A little less abuse could go a long way towards making other Democrats excited about a Sanders nomination.

The flipside of point 1: Not only should Sanders stop attacking Democrats, he should affirmatively claim the mantle of Democratic partisanship. He should especially embrace the legacy of Barack Obama, who remains hugely popular among Democratic voters.

Embracing Obama doesn’t mean compromising on policy positions. Rather, it means that Sanders should frame his goals and accomplishments as continuous with, rather than as a break from, Obama’s administration. Medicare for All is a logical extension of Obama’s efforts to expand healthcare with the Affordable Care Act. Sanders’ promise to curtail American military interventionism is in line with Obama’s efforts to extricate the US from Iraq.

Unlike Jeremy Corbyn, who was out of step with his party on Brexit, Sanders’ policies are mostly congruent with long-time Democratic goals. He can reassure and encourage Democratic voters by making that clear.

Attack Trump all the time

Elections are always strongly influenced by negative partisanship. Especially with a broadly unpopular incumbent Republican president like Donald Trump, the best way to rally Democrats is to remind them how much they hate the guy in office.

Billionaire ex-New York mayor Mike Bloomberg, a former Republican with little charisma and a history of allowing racist policing practices, has managed to give himself a major bump in polls just by running ads about how horrible Trump is. This can work for Sanders too — as the Senator is well aware. His speech after the Nevada caucus was mostly devoted to lambasting Trump’s “greed, corruption, and lies.” Expect more of that, and rightfully so, if he becomes the nominee.

Choose a VP from outside his faction

Candidates always try to use the VP to balance the ticket. For many, this means trying to find someone who has regional strength. For Sanders, though, the most important thing is to show that he’s not just a factional candidate, but is fighting for, and working with, all Democrats. That means picking a vice presidential nominee who is not a loyalist — so not Sanders national campaign co-chair Nina Turner, and absolutely not Hawaii congressperson Tulsi Gabbard. Instead, Sanders should choose someone like Obama HUD secretary and Warren surrogate Julian Castro, Georgia voting rights activist and former gubernatorial candidate Stacey Abrams, or Massachusetts Congressional representative Ayanna Pressley.

There are many progressive candidates who broadly share Sanders’ positions and goals, but who supported someone else for president in 2016 or 2020. Selecting one of them as VP would be a good way to signal that Sanders is eager to broaden his coalition for the general election.

Use the convention to call in party rivals

Sanders and Sanders’ supporters have spent the last months saying horrible things about Pete Buttigieg, Kamala Harris, Elizabeth Warren, Joe Biden, Hillary Clinton and other challengers and rivals in the party. That’s what you do in primaries, but the party convention is the place to walk it all back. Opponents — and yes, even Hillary Clinton — should be given a chance to speak; Sanders should thank them and praise their campaigns and their accomplishments.

If that sounds familiar — well, again, yes. This is what conventions are for. In 2016, Clinton gave Sanders a speaking slot, and adopted many of his ideas for the party platform. Sanders may now have a chance to do the same for those who ran against him.

Sanders’ odd history with the Democratic Party means he has some unique challenges in bringing the party together. But the truth is that primaries are always fractious and tense, and the general election candidate always has some healing to do. Sanders isn’t that different. As these steps indicate, he can unify the party without compromising his policy or his values. There’s every reason to expect he will.