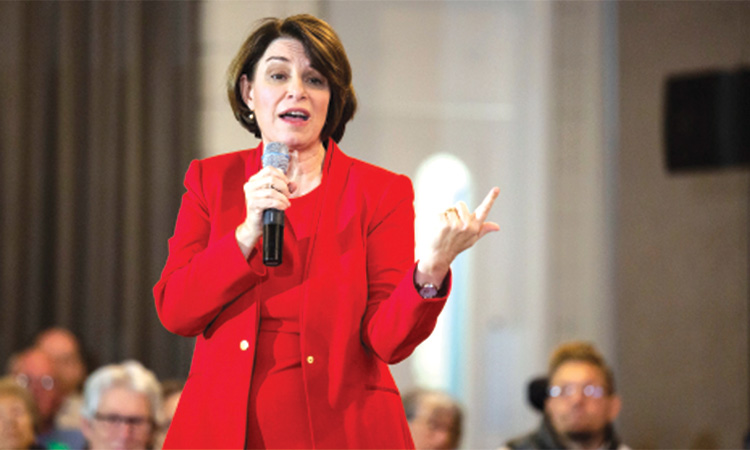 Results of the state-by-state races for the Democratic Party’s nomination do not reflect the national ranking of remaining candidates. Last weekend’s vote in Nevada was the third contest for the candidates and the vote on the 29th in South Carolina the fourth. Some hopefuls may improve their positions but the outcomes of these contests will not deliver a clear picture of the situation. This may not come until March 3, when 15 states and territories cast ballots on “Super Tuesday.” Among the heavyweights are California, where Bernie Sanders is ahead, followed by Elizabeth Warren; Massachusetts where Warren leads Joe Biden; and Texas where Biden is ahead and Michael Bloomberg has moved into third place.

The latest YouGov poll revealed that on the national level Senator Sanders has the backing of 22 per cent of respondents; former Vice President Biden, 18 per cent; Senator Warren, 15 per cent; former New York Mayor Bloomberg, 12 per cent (although he did not participate in early contests); former mayor Pete Buttigieg, 10 per cent; and Senator Amy Klobuchar, seven per cent.

Although Buttigieg topped Sanders in the chaotic Iowa race, Klobuchar beat Biden and Warren in New Hampshire. She has been dubbed “the come-back kid,” as her poll numbers had been low and faltering. She and Buttigieg compete with Biden and Bloomberg for the so-called “centrist” or “moderate” vote, which could decide the presidential contest in favour of the Democrats over Republican incumbent Donald Trump whose “base” of supporters amounts to 30-35 per cent of the electorate.

This is where Bloomberg, Buttigieg and Klobuchar come in. Bloomberg is a self-financed newcomer to the race who is regarded as the maxi-billionaire who can beat lesser-billionaire Trump. However, Bloomberg is 78 and carries a considerable amount of negative “political baggage,” particularly with black voters who are essential for Democrats if they are to win the presidency. During his time as mayor of New York city, he backed the police “stop and frisk” policy targeting random black males in high crime areas of the city.

Pete Buttigieg, 38, who challenged Sanders in both Iowa and New Hampshire, is the youngest of the candidates. He gained whatever political experience he has while mayor of the middle-sized town of South Bend, Indiana, population 100,000. Born there in 1982 to academic parents (his father, an immigrant from Malta), Buttigieg was educated at Harvard and Oxford and worked at a management consulting firm before joining the navy as an intelligence officer and deploying to Afghanistan. A backer of standard Democratic Party policies, he launched an exploratory campaign 13 months ago and has adopted a populist approach to voters, enabling him to challenge Sanders. He is brash and self-assured. While he does not enjoy support of the black or Hispanic communities, his main problem will be overcoming prejudice as he has come out as the first openly gay man to bid for the US presidency.

Unlike Buttigieg, Senator Amy Klobuchar has years of experience with in-fighting and legislating in Washington. Born in 1960 in the northern state of Minnesota, Klobuchar’s father — who is of Slovene parentage — was a well-known journalist who maintained close ties with local miners and labourers. Her mother was a teacher who retired at 70 years. Klobuchar excelled at school, earned her BA degree in political science at Yale University and a law degree at the University of Chicago. She worked as a corporate lawyer and prosecutor before entering politics due to a harrowing experience. After she was forced to leave hospital 24 hours after her daughter was born, she appeared before her state legislature to call for a law that would guarantee new mothers and their babies a 48-hour hospital stay. The measure was adopted not only in Minnesota, but also nationally. In 2006 she became Minnesota’s first female Senator and won in 2012 and 2018.

Klobuchar has a reputation for getting things done. At the end of 2016, she was credited for passing more legislation than any other senator. During Trump’s time in the White House she shepherded the adoption of 14 bills. In May, she put forward a $100 billion (Dhs3.7b) plan to combat drug and alcohol addiction and boost mental health care. During the campaign, she presented a list of 100 actions she would take in the first 100 days as president. Among these issues are ensuring voting rights for all, controlling prescription drugs and enforcing anti-monopoly laws.

Like Buttigieg, her weakness is lack of recognition on the national scene. She is also problematic because some commentators claim the US may not be ready for a woman in the White House. They must remember, however, that nearly three million more voted for Hillary Clinton than Trump in 2016. Of course, Clinton, as a former first lady and senator, could compete for national recognition with virtual reality showman Trump and, if the US had been a true democracy, she would have been president now and the world would not have had to contend with Trump for another year and fear a second Trump term.