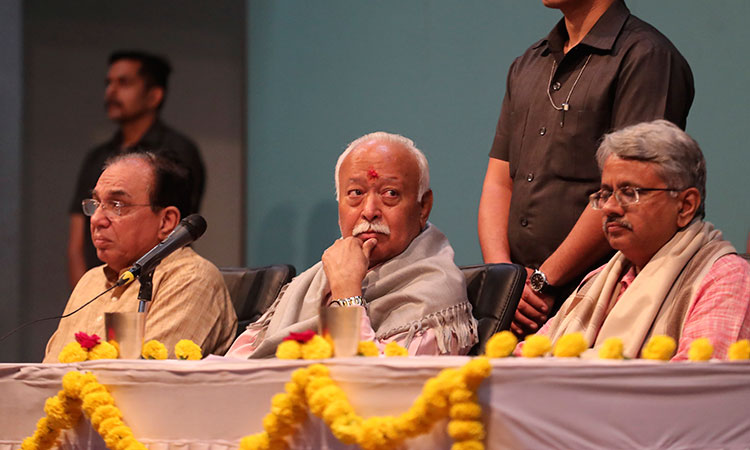 The secular forces in India find everything about the Rashtriya Swayamsevak Sangh (RSS) abhorrent. Its working, its philosophy, its reach and work for the society, its strong commitment to the nation — everything is questionable for the established opinion makers, social media influencers and politicians. Our nation is changing in a decisive manner, our narrative is changing in a manner that the established Left-secular lobbies do not like. It is a journey from an idea of a rootless new nation supposedly created by the British and nurtured by Jawaharlal Nehru to an India that is going back to its roots, finally, recognising its ancient genius.

This is the root cause of current disturbances being whipped up by vested interests who fear losing their privileged status. RSS is seen as the prime mover of this change with its 95 years of penance to establish cultural Hindu roots as the foundation of this nation, called Bharat since eons. Many people believe that the RSS is controlling the political discourse of India now and wishes to establish Hindu Rashtra, a theocratic state. They believe that RSS wishes to control all apparatus of policy making. Nothing can be farther from the truth. Hindu Rashtra is not a religious construct but a Dharmic construct that means governance based on rule of law, ethics and morality, with each individual following his/her dharma, that is duty. Dharma is not religion.

Even when the RSS and its affiliates were not so big, the Congress feared its growth and tried to suppress it immediately after India’s Independence because of its rising popularity. Popularity earned due to its sacrifices and selfless work of saving Hindu-Sikh brethren from the violent Muslim hordes in newly-created Pakistan; and efforts to rehabilitate them. For a party habituated to hogging the limelight, it was not just disturbing but this popularity was also perceived as a threat to its political monopoly. BBC, during those days, noted that if there was one person who could sway the masses besides Nehru, it was Shri Guruji. Thus, began the games of somehow stopping its growth.

Resolutions were passed in by Congress committees of Maharashtra and Uttar Pradesh to crush RSS, followed by a resolution in AICC to stop RSS work in 1947 itself. A huge proposed state-level camp of RSS in November 1947 was cancelled at the last moment, where Sardar Patel and Shri Guruji were scheduled to come. All this happened despite Guruji’s clear statements including his speech during Vijayadashami of 1947 that RSS had no interest in joining politics. What a reward for an organisation that during Partition was the sword arm of Hindu-Sikhs as The Tribune put it.

The assassination of Gandhiji was a heaven-sent opportunity to crush RSS. Nehruji had declared about a week before this unfortunate tragedy in Amritsar that he would crush RSS. Therefore, inspite of a CID report within a month of this assassination that the RSS had no role to play in either the assassination or any incidents after it, the central government chose to bury the report and the charade to tar the RSS continued.

After the ban was lifted unconditionally, the RSS leadership chose not to counter accusations and concentrated on rebuilding the organisation from scratch. The RSS chief said, “One doesn’t break one’s teeth if they bite our tongue” and asked swayamsevaks to forget and forgive. In this one sided narrative, the Congress and its Left cohorts had a field day blackening and abusing it. Ultimately, the work of RSS spoke and people began respecting and appreciating its positive work for the society and the nation.

After all, what does the RSS want? The RSS wants to organise a united Hindu society that reforms itself of its ills, raise selfless people of high character who take pride in its glorious history; and are ready to work for a prosperous India. This is to be done by sacrificing one’s own ‘tan, man, dhan’ — physical, intellectual and material resources. Physical exercises are to discipline mind and body. Its constitution clearly says that violence has no place and any person found to indulge in any violent act shall be thrown out of the organisation immediately.

For the RSS, any person born and brought up in India who believes that all Indians have common forefathers and loves this country is a Hindu. The RSS is clear that politics is only a part of the social domain. It cannot take care of all the issues of the society. A nation can progress only if society is led by men of character in all fields. RSS wishes to create such men and women. Dr Hedgewar, in answer to a question, had said, “RSS will do nothing. However, the swayamsevaks will do everything.” This is why you see RSS people in every arena of social life, not to control it, but to serve the society in whatever capacity it is possible.

Doctorji used to say, we are not here to celebrate anniversaries of Sangh. He said, we must complete this duty of freeing our nation at the earliest. Even now, RSS leaders say, “We do not wish to celebrate 100 years of Sangh. Our goal is that entire society be awakened and unified.” Dr Hedgewar was clear that RSS would be an organisation of the society, and not an organisation in the society. He would say that the day objectives of Sangh are met, it will merge with the society i.e. it will be ‘Sanghamay samaaj’ i.e. society imbued with Sangh ideals. He wished no name or fame for the organisation.

Hence, after he began RSS work in 1925, he went to jail in the 1930 satyagraha after resigning as the office-bearer of RSS. The same principle was followed when RSS people took part in the 1942 movement and liberation struggle of Dadra, Daman Diu, Nagar Haveli and Goa. After its sterling role in fighting dictatorship in 1975 that saw thousands of its workers suffer imprisonment and persecution, RSS chief Balasaheb Deoras exhorted people to forget and forgive. Nation comes first.

With nearly 36 national organisations inspired by or affiliated with RSS, nearly 1,30,000 seva projects across Bharat and millions of selfless members/swayamsevaks dedicating time and resources for the betterment of the nation, it is but natural that RSS is seen everywhere. But, all this is with a spirit of service with self-sacrifice not for any political gain. There is nothing wrong with RSS, it is the way its detractors look at RSS that is wrong.

Fear of RSS trying to dominate others is a deliberate misrepresentation by vested interests. Preconceived prejudice and scepticism of people who have profited from state patronage makes them suspect this organisation. Once people take off their political glasses and interact with RSS work closely, they will understand that RSS is there to serve, not to dominate or control society.