An era of rationalised atrocities 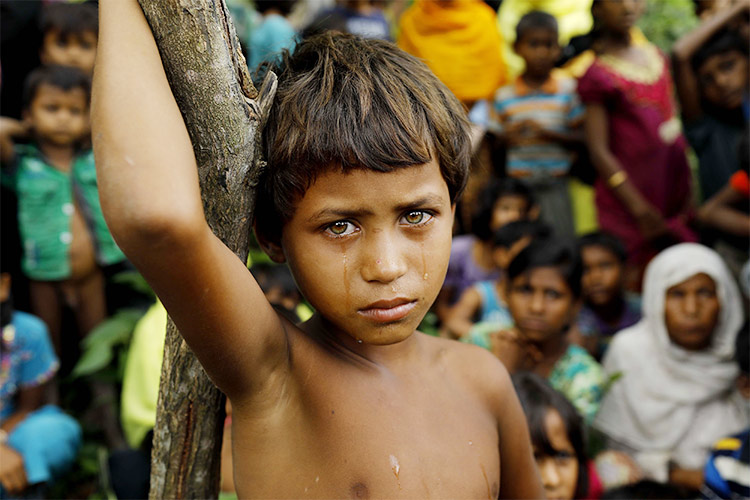 Empathy is man’s greatest moral virtue, the force behind humanity’s paramount achievements and the creator of unbreakable connections; it is also under threat of extinction. History tells of horrendous man-inflicted atrocities some of which measure unfathomably high on the tragedy scale and as one learns about these injustices, they find themselves attributing them to some great evil and asking themselves how such an unspeakable catastrophe might have been allowed to happen. The reality is, that such moments are taking place as I pen this article and as you are reading it, injustices committed by people on a massive scale are not confined to history books, they are happening right now. Meanwhile, we have become the people who the next generation will ask themselves about: how did we allow such events to happen?

At this moment in time there are multiple genocides taking place and many more on the genocide watch list. Myanmar’s unimaginable atrocities of ethnic cleansing that have forcibly displaced more than one million Rohingya Muslims. The Congo facing one of the bloodiest civil wars, its people living with fear, violence and senseless death, it has been named the rape capital of the world. The Syrian war which has provided a battleground for all world players to exact their agendas one of which happened at the hands of Daesh with the persecution of the Yazidis and the other at the hands of the Turks who are aiming to eradicate the Kurdish people. This nine-year war has seen thousands massacred and left millions on the run, their bodies sinking into foreign oceans as they sought refuge. The Chinese government is exacting a cultural genocide on Muslim Uighurs who are estimated to be 2% of the population, putting their approximate number at 20 million people. The Uighurs are being mass incarcerated in detention camps where they are brainwashed to denounce their faith and awarded points for their ‘ideological transformation’. We read the history books and shake our heads in astonishment at how the Holocaust, the Armenian and the Rwandan genocides took place and how the exodus saw almost a million Palestinians become refugees as Zionist militias massacred entire villages and occupied their land.  Meanwhile, here we are yet where are we really?

Young activists like Greta Thunberg are fighting for the Earth’s survival but what use is this planet if it continues to be nurtured by the blood of the innocent and prosper through others’ misfortunes?

We are here, in an era of the strong, one that rewards a means to an end mentality, where qualities like empathy and compassion have been downgraded to attributes of weakness and gullibility. Complacency has taken the place of outrage and demands for justice have been substituted for trending hashtags and unified profile pictures. In the face of mass atrocities, we stand in mass indifference rationalised by logic that sees us through the day. It once was that crimes against humanity were reason for massive movements, Never Again movements that aimed at putting an end to these horrors and refusing to allow governments to commit them in the name of sovereignty, to send a message that no one is above the law. Today, while the cyber world rages with ideologies and passionate moral perspectives, the streets remain comatose, echoing nothing but silence.

Evil does not just arise from nothingness, most of the time it is nurtured by society’s failure to activate its moral standards. What is worse than indifference is when people’s nationalism allows for the conscious rationalisation of brutality as part of a political balance sheet. It is but a grave oversight when people shift their responsibility towards moral values for the duty to obey. Morality is man’s only trustworthy guiding tool and empathy is that natural instinct in which without it the world would be a much darker place to inhabit. The world should be outraged by the man-made tragedies and this outrage must be translated to a global fight that involves activists, diplomats and civil society leaders. It must be articulated in words that set the unjust on fire, that light the way for those innocents being persecuted and maybe, just maybe, put an end to their suffering.

Young activists like Greta Thunberg are fighting for the Earth’s survival but what use is this planet if it continues to be nurtured by the blood of the innocent and prosper through others’ misfortunes? Save the trees, the oceans and the skies, save the planet but do not forget to save its soul.