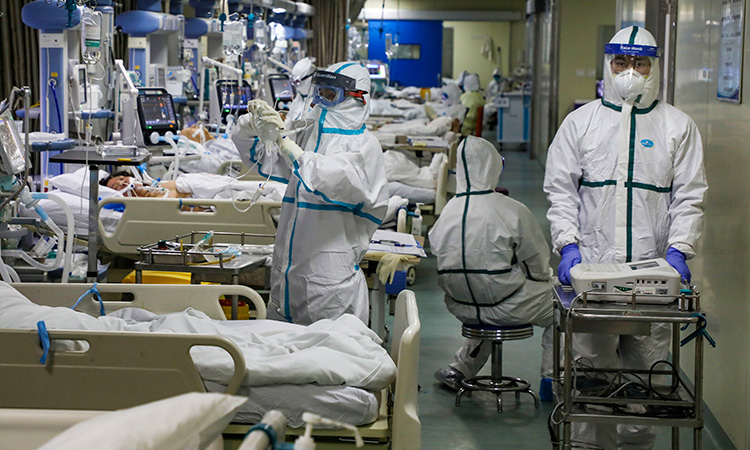 Of all the questions scientists hope to answer about the new coronavirus sweeping across the globe, the most pressing is this: How deadly is it? The only way to know is to figure out how many people have been infected — and that’s the real challenge.

More than 40,000 infections have been confirmed, but experts are certain there are at least tens of thousands more. Some cases haven’t been counted because patients didn’t have biological samples sent to a lab. Some never saw a doctor, and others had such mild symptoms that they didn’t even know they were sick.

Without a true picture of the total number of cases, it’s impossible to calculate a fatality rate. That’s why scores of epidemiologists and mathematicians are working to solve one of the most complex modeling problems of their time.

Situation reports from the World Health Organization provide an upper boundary of the mortality rate. As of Monday, there were 40,554 laboratory-confirmed infections around the world, resulting in 910 deaths. A bit of simple arithmetic indicates that slightly more than 2% of those infections were fatal.

But since the current infection count is too low, that death rate — known formally as a “case fatality rate” or “case fatality ratio” — is too high. “That’s one thing we can pretty much say with certainty,” said Josh Michaud, who was an infectious disease epidemiologist with the Defense Department during the H1N1 influenza pandemic in 2009.

Dr. Nancy Messonnier, director of the National Center for Immunization and Respiratory Diseases at the Centers for Disease Control and Prevention, said the 2% fatality rate “has been relatively stable” so far in the outbreak. “But whether that actually is a real case fatality ratio or not, I just don’t think that we have the information right now to say.”

When an outbreak involves a never-before-seen virus, there are no shortcuts epidemiologists can take to determine how many people have gotten sick and how many have died. They’ll need to dig into a variety of sources to see how many coronavirus deaths were mistakenly blamed on other causes, and vice versa. They’ll also need to figure out how many infected people never interacted with the medical system.

Researchers at Imperial College in London have modeled the infection’s spread based on the number of confirmed cases and the flow of travelers in and out of Wuhan, China, before quarantines took effect. The team assumed the virus had a five- to six-day incubation period before symptoms appeared, and that infected travelers were detected when they reached their destinations.

The result was a case count between 1,000 and 9,700 as of Jan. 18, a date when the official tally of infections was below 300. Uncertainties in the model resulted in a wide error range, but the true number of infected people was probably around 4,000, the team reported.

The WHO is creating its own research consortium to investigate the original source of the new strain of coronavirus and how readily it spreads. By honing in on those parameters, the WHO can make its models more accurate. “The more time you have, the more evidence you have to work with, the better your estimate will be,” said Dr. Carlos del Rio, a global health epidemiologist at Emory University.

A good outbreak model is a lot like an iceberg, said Marc Lipsitch, an infectious disease epidemiologist at Harvard’s T.H. Chan School of Public Health. The iceberg’s tip — the part you see — is the patients who die. This is the easiest number to assess for the simple reason that deaths are hard to miss.

All the other infected people are the part of the iceberg that’s underwater. Epidemiologists divide them into tiers. Just below the surface are the patients who get sick enough to be hospitalised. Below them are patients who seek basic medical attention. The next tier is made up of people who nurse their illnesses at home, and the last is the people who have no symptoms.

In 2009, when Lipsitch was helping the CDC determine the severity of the H1N1 flu, he and his fellow researchers recognised that no single data source could capture all five tiers. So they gathered surveillance data from various parts of the US health system and pieced them together to generate their iceberg model.

One key contributor was the New York City Department of Health and Mental Hygiene. Officials there didn’t try to count every single person who became infected. Instead, they focused on carefully documenting every patient who was hospitalised. Thanks to that precision, researchers could determine the relationship between hospitalisations and deaths.

At the CDC, workers conducted telephone surveys to ask people whether they had come down with flu-like symptoms around the time the outbreak began in April and May and, if so, whether they’d seen a doctor. Within eight months, scientists had a reliable model of the H1N1 virus that included everyone except those who were infected without realising it. To count them, researchers would need to collect blood samples from randomly selected members of the public and test them for H1N1 antibodies, a sign that the person had been exposed and their immune system had responded. But such tests were too time-consuming and expensive to justify.

There’s another reason experts think the coronavirus case count is off: missing data. Whether they acknowledge it or not, the outbreak has Chinese health officials strapped for time and resources. Workers may not have the bandwidth to keep records of patients with mild infections, even though they belong in the total case count, Michaud said. Nor are there enough test kits available to diagnose every patient they suspect is infected. Even the death count — the most reliable figure — could be too low.

Experts also suspect Chinese officials are withholding data that could be embarrassing to them, such as the number of medical workers who have died so far.

Scientists aren’t ruling out the possibility that the virus will evolve in a way that makes it more lethal, or that helps it spread from person to person (or both). But they point out that it wouldn’t be in a virus’s best interests to kill its host before it can spread to a new one.

At this point, the new coronavirus seems to have more in common with the regular flu than with exotic diseases like Ebola or Middle East Respiratory Syndrome (MERS), both of which had fatality rates around 40%. Among a group of 17,000 people with confirmed coronavirus infections, 3% were classified as critical, 15% had severe infections and 82% were mild, said Dr. Maria Van Kerkhove, the WHO’s acting head of emerging diseases. Of the 2% who died, many were elderly with underlying health issues that made them more vulnerable.

“We can say pretty confidently that this isn’t killing people left and right,” Del Rio said. A 2% fatality rate may sound low, but it’s high enough to cause real damage in a worst-case scenario where the virus isn’t stopped.